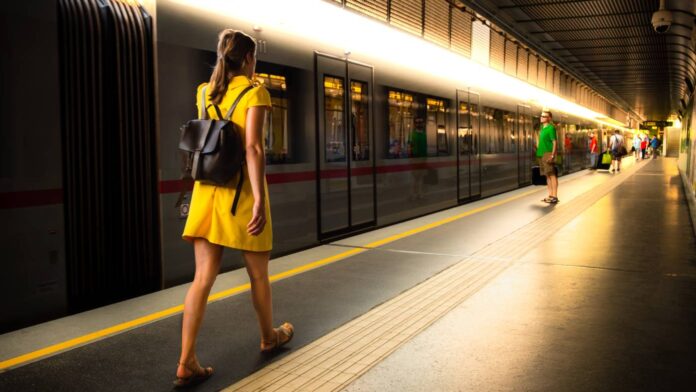 Composition and framing are two essential elements worth considering when constructing a shot for your film project. The way you block your subject, in association with the background, will help your viewers focus on key parts of the frame. Professional filmmakers use a technique called leading lines to guide audiences’ attention to specific areas in the frame.

It’s an incredibly useful technique every filmmaker should implement in their work. They can help highlight character interactions and guide viewers’ eyes to important plot clues in the background.

Let’s take some time and discuss what leading lines are and how filmmakers use them in cinema.

The concept of leading lines lies within composition fundamentals. Leading lines are the tangible or intangible lines in the frame, created by things like roads, buildings, signs, arrows or light in the background that lead the viewers’ eyes in a particular direction.

Why use leading lines?

Using leading lines in your film is an excellent way to help make your shots look more cinematic. This can be done at no extra cost to your budget. You just have to know how to frame the shots and find the leading lines in the background.

Many filmmakers like to use diagonal and curvy lines. This is because these types of lines break up the square format. Also, curvy and diagonal lines typically run across the entire frame, encouraging viewers to scan through the entire frame. It can give a sense of flow to your composition, guiding your audience’s eyes across the frame.

However, that’s not to say vertical and horizontal lines don’t have their place in cinema. These lines are great at drawing attention to a specific area of the frame. For instance, in “The Shining” (1980), viewers’ eyes are visually guided by the lines in the hallway to focus on the center of the frame — exactly where Danny stares at the creepy twin sisters.

How to compose your shot using leading lines

Leading lines are everywhere and a part of our everyday lives. No matter where you go, there will be lines you can utilize. This includes buildings, paint on the ground, bricks and roads or things we find in nature like cracked ice, rivers and tree branches. The possibilities are really endless. You just have to recognize the leading lines in your environment and compose your shot. You also have to be mindful of the lines you don’t want to include in your frame. Misplaced lines can misdirect your audience from where you want them to look.

When composing your shot, you want to consider two important concepts. The first concept is depth, and the second is pointing the lines towards your desired area.

A simple way to think about depth in association with the leading techniques is the three-point perspective drawing you might have used back in art class as a middle school student. The three-point perspective uses a drawing trick to create vanishing points to create three-dimensional depth on a two-dimensional medium like paper. The same idea can be applied when using video and leading lines, which is to have the lines leading into your subject vanish off in the distance. This creates a more three-dimensional look within your shot.

Your viewers ‘ eyes will instinctually move towards your character by placing your subject just of to the side of where your leading leads go. You can then focus the audience’s attention on the character or clue in the frame and effectively use leading lines to create depth in the shot. The depth of the leading lines creates a foreground, a background and an interest point for the frame, which is an effective way to help pull your audience further into the story while also locking your subject into sharp focus.

When you shoot your subject against a flat wall, it gives the shot no dimension and depth. This isn’t very inviting to the audience. Where you stand and how you point your camera make all the difference in the world. Going off to the side at a 45-degree angle will help create the leading lines technique more effectively. Also, your lens choice can impact how cinematic the shot will look.

Another way to emphasize your leading lines shot can be lowering the camera, so it’s looking up at the subject. This will dramatically affect the perspective and depth of the frame. A similar effect will happen if you position the camera at a bird’s eye view; just this time, it will make your subject look more powerless.

Another aspect to consider when composing your shot is how the lines lead into your subject. For example, the lines can intersect with your subject or lead to the character’s eye line. You can communicate where your subject’s focus is through leading lines. Back to “The Shining” example, we know that Danny’s looking at the twins because all of the lines point to them.

“The Dark Knight” (2008) effectively use the leading lines in Gotham City’s architecture to keep viewers’ attention on Batman throughout the film. For example, in the scene where Batman is racing through Gotham on his Batpod (motorcycle), the lines of the road and tunnel keep the focus on Batman. Even during all the scene’s chaos, viewers know where they should focus their attention.

Another excellent example of the leading lines technique is the classic film “2001: A Space Odyssey” (1968). The film’s director, Stanley Kubrick, uses leading lines to keep audiences’ eyes glued to the screen. In the iconic shot of Dr. Dave Bowman walking through one of the cylinders of the spacecraft, the lines in the scene, accompanied by the dolly shot, keep the audience focused on Dr. Bowman.

The world is full of lines. You just have to know how to identify them and use them to enhance your composition. The whole technique of leading lines is to direct your viewers’ attention in a frame. It’s possible you want to focus on a specific area of the frame, or you want your audience to focus on the entire scene. The lines you use and don’t use will visually communicate where you want your audiences to point their attention. They are a powerful tool, and you should always consider them when composing your shot. Lines exist everywhere, so no matter where you go, there will be lines pointing in some direction; make sure they are pointing to where you want them to.