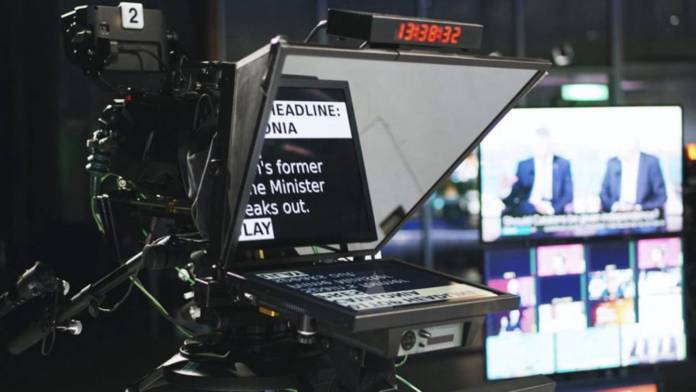 Using a teleprompter when speaking on camera can help you or your talent more clearly deliver information to your audience. It’s a tool that’s very useful in professional video production.

Though useful, teleprompters aren’t always the easiest for on-camera talent to use. In this article, we will give you a few tips you can implement for a more natural performance when using a teleprompter.

What is a teleprompter?

A teleprompter is a device that displays lines of speech for a speaker. It is sometimes placed below the camera, but the best options are those that project text directly in front of the camera lens so that the presenter can look directly into the camera lens. The device features a flat-display screen that is placed horizontally below the camera. Then, a transparent mirror is placed at a 40-degree angle to it so that the words are reflected back at the presenter.

Whatever your setup, the teleprompter should never appear in the shot.

Why should you use one?

The purpose of a teleprompter is to allow the presenter to deliver lines from the script without having to memorize them. It is very helpful for those who don’t have time to memorize an entire script or when you need to clearly deliver technical information.

Not every production will benefit from using a teleprompter, but for some, it’s vital.

How do you use a teleprompter?

Practice speaking while reading from a teleprompter to get used to it before your shoot. Try to maintain a natural tone and speed; make adjustments to the teleprompter’s scrolling speed rather than changing how you speak. It will feel and sound so much more authentic.

Sometimes what sounds good on script doesn’t sound good rolling off the tongue. Different words and phrases are compatible with different speaking voices. The script may have been written by someone other than the speaker, but in the end, it needs to sound natural to the person delivering the lines.

Speakers should always read and say what is natural to them. For instance, if the script uses the word “receive”, the speaker might feel more comfortable saying “get.” Though the script may be written a certain way, the speaker should go with the word that feels most natural to them — as long as it doesn’t change the meaning of the text.

You can also read a portion from the teleprompter and then stop to add in some extemporaneous lines. You can see this used a lot by late-night TV hosts. It adds authenticity to the jokes and punchlines. It really feels like the hosts are coming up with the jokes right then and there when actually they were written in advance by a team of writers.

Customize the teleprompter to promote readability

Most prompter software is customizable, so take advantage of that if you can. Many teleprompters allow you to choose the background color, foreground color, font size and typeface. It is best to customize it to the presenter. Set it up to promote the easiest reading for the speaker.

Pro tip: Keep the contrast high. White text on a black background is standard. This promotes the best readability for most. Also, be sure to print out a copy so the producer or director can follow along.

Take a look at your or your presenter’s body language. If you or they are projecting a stiff, monotone performance, it will become clear as day that there’s a teleprompter being used. To avoid this, get comfortable with the script before the shoot. You don’t need to know the script by heart, but it helps to at least read it through to prevent any surprises in front of the camera. This will help you feel more prepared so you can be more comfortable in front of the camera.

Don’t panic if there’s a mess up

Teleprompters can be very useful in video production, but they don’t need to be followed word for word. Presenters should always take creative license and inject their own personalities and talents into their performances. Plus, the great thing about video is that you can always try again in another take. Sometimes, it can take a couple of tried to get the words out.

Regardless, teleprompters are great tools when you need too clearly and efficiently present information to the camera.