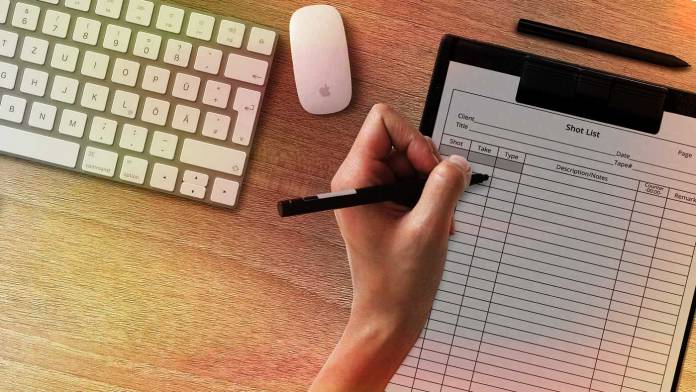 What makes for a smooth production? Simple answer: proper planning. A shot list is a detailed list of every shot the filmmaker or video producer intends to capture during production. It’s a helpful step in the pre-production process.

Taking the time to break your script down into individual shots helps set and manage the production budget and shooting schedule. Plus, it helps keep the production organized before the cameras start rolling. There’s no project — big-budget Hollywood blockbuster or microbudget indie film — that can maintain an effective shooting schedule without preparation. So, before you grab your gear and hit record, let’s break down the basics of a shot list and why you need one for your production.

A shot list is a checklist that details things like the framing and composition of a shot. It includes the shot type, the movement of the camera, lenses and any other production gear will be needed. Usually, it’s organized with scene numbers and shot numbers. This includes a description of any action or dialogue, as well as the actors involved in the shot. Furthermore, it includes locations, props, and notes the director and cinematographer may jot down.

Since a film or video project involves motion and moving images, it is essential to go through every single page of a script and figure out what shots are going to work best visually.

The shot list is one of the first things you create after the screenplay is finalized. It’s similar to the director’s shooting script. However, this is different from the screenplay since it breaks down each shot and includes detailed cinematography instructions. Since a film or video project involves motion and moving images, it is essential to go through every single page of a script and figure out what shots are going to work best visually. That is why having a shot list is critical for all productions.

There are many seasoned and professional filmmakers that will argue that a storyboard and shot list go hand-in-hand. However, full storyboards are generally optional. They are usually more suited for complicated, big-budget shoots. Many filmmakers bypass storyboarding their projects and delve straight into shot listing the script.

During the early pre-development stage of your project, you should take your script and visualize it into various shots. You can do this by taking a pencil and marking a line closed off at the top and the bottom top to indicate the end of that shot. Give each shot a unique number, starting with 1.

Once you’ve gone through your script, you can work from your script to craft your shot list. The goal is to create an easy-to-reference information sheet to use during production. It’s common to organize your list by the length of each shot, then by actors, location, props and gear.

A film or video project is never shot in chronological order. Some filmmakers shoot the most expensive shots first or shoot the interior (indoor) shots before shooting the exterior (outdoor) shots, usually because of bad weather delays. It’s common practice to shoot day scenes before night scenes because night scenes usually require special lighting and lenses. Whatever order you decide to go with, a shot list is the only way to be mindful of schedules. It can be helpful to plan your schedule and organize your shot list at the same time. This way, you’ll know exactly what you need to capture on each day of production.

Shot lists can vary from project to project and director to director. However, the types of shots used in a scene generally follow similar conventions. The director and cinematographer decide which shots work for what is being filmed. For example, you’ll need to determine whether a shot will be more effective as a wide shot or a closeup.

You’ll want to familiarize yourself with standard camera lingo and the various shot types used by directors and cinematography before tackling your shot list. That way, you’ll have a more complete visual library to draw from as you plan out your sequences.

The most important elements

A good shot list will help you stay on track as you tackle complicated shots. It will maximize your shooting time and bring clarity to your project. This should benefit everyone involved.

Anything that might slow down a production or run a production over budget can be foreseen and resolved before going into the production itself. Creating the perfect shot list is no easy task, but it can be achieved with careful planning and believing in the one person that can make anything possible — yourself.