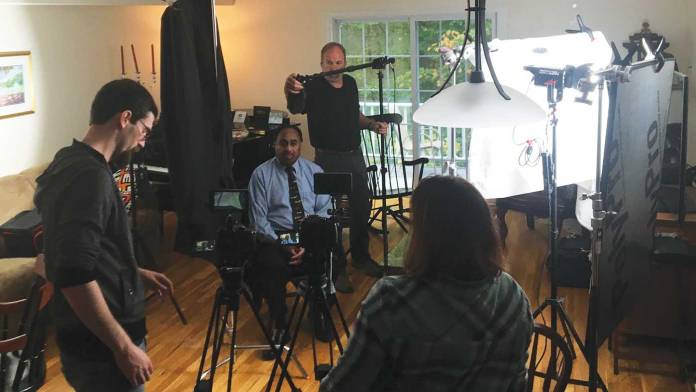 Lighting can make or break your shot. When you find yourself facing a challenging location to light, stop and think. Quick thinking can be more valuable than whatever you have — or don’t have — in your video lighting kit. Let’s look at how a few cinematographers found inventive lighting solutions without going over budget or into overtime.

Shooting in a small space presents a challenge in itself, but it’s even more daunting when you’re short on time.

“We shot an interview in the small one-bedroom apartment,” says Dave Wurtzel, a cinematographer based out of New England. “The space was incredibly limited. We had to move furniture and a piano, and completely light it all within a 1.25 hour set-up window.”

The solution: “When working in limited spaces on limited time, it’s important to make lights double or even triple their purpose,” Wurtzel says. “I used an open-end book light (with a 120d) as the key, which flooded light out of the top and sides to raise the overall ambient light level in the room,” Wurtzel explains.

“For a kicker, I bounced a second 120d off an adjacent white wall. The spill also worked to raise the ambient light level. I walked in a negative fill to generate a slight shadow on the talent’s face.”

Wurtzel finished off the look with a household lamp. This motivated a gradient going from daylight (window) to tungsten (practical), which helped generate color and story contrast. It even fit with the film’s motif.

“A large theme of this documentary was the connection to man-made inventions that seek inspiration from the natural world,” Wurtzel explains. “Household light mixing to the natural light was a nice touch.”

Having your production garner public attention is usually an annoyance at most. For NYC producer James Adames, capturing the most essential scene in a documentary on human trafficking meant switching methods. He had to ditch his overt lighting gear for a stealthy solution.

“​I was working on a shoot based around human trafficking in Arizona’s borders,” he explained. “I had met these very interesting contributors in Mexico who were going to show me how easy it was for them to cross over from Mexico to Arizona.”

At first, Adames had three light panels set up on sticks near the location of the shoot. However, his research told him this was potentially a bad idea.

The solution: Adames strapped a small light panel to the top of his camera. He then asked the contributors to use the iPhones he had given to them for keeping in touch. “Once they crossed over, I [asked] them to turn on the light from their phone and point it towards them as they walked towards the van that was going to take them to a stash house (wearing masks of course),” says Adames.

“At the same time, I pointed my camera above the light panel to get as much as I could get on film of them walking past the borders and into the van,” Adames commented. The shot was very different from traditional style. “I didn’t get my iPhones back, but it was well worth losing them due to the nature of the shoot and the unique access I got,” he said.

Transform the wrong location with the right lighting

Walking into a location that has the complete opposite look of what you’re going for can feel daunting. It gets worse when you’re working with a small budget and limited lighting resources. For east coast director of photography Wesley Kabakjian, capturing a kidnapping victim’s personal story in a bright setting presented a challenge. “For this film, it made sense to do a dark and moody theme – but we were shooting in a brand new, white-walled apartment,” he says.

The solution: “I had 650-watt Fresnels, and a couple of Quasar science LED tubes in my personal kit,” says Kabakjian. “There was one single window, so I mimicked a golden hour look by putting one of Fresnels outside of the window, setting my white balance to 5600 while keeping the Fresnel at its tungsten color.”

Utilizing natural light can get tricky when it comes to consistency, but luckily the overcast weather worked in Kabakjian’s favor. “The ambient light broke up the white wall in the background by creating light streaks though the venetian blinds that were there, which made the space look more captive,” says Kabakjian.

“To separate my subject from the background, I keyed him with soft LED tube lighting and a cool kelvin around 6000. It brought a dark and moodier look which aided in telling that story.”

Rethink your layout – not your equipment

The layout of your shoot can be just as integral as the gear you use. This is especially true when you’re working against natural light, not with it. This was the case for senior producer Aaron Randerson. “We were shooting a scene at a bar top counter,” he explains.

The layout of your shoot can be just as integral as the gear you use.

“There were two major challenges: natural light was coming from windows that were in the wrong place. By the time we would be wrapping, it would be completely dark outside. Also, the constraint of the space itself. The bar top was very fairly short on one side. Thus, it would be severely limiting to shooting any other angles – namely the reverse for a dialogue scene.”

The solution: “We completely blacked out the windows to avoid shifts in light,” Randerson says. “We lit the bar top scene’s principal actor first and filmed everything one way. Then, we shifted everyone to the other end of the bar and filmed the reverse, both giving it the impression of a longer bar top and creating room for us to light.”

Use time of day as a tool

If have flexibility on timing, rejiggering your production schedule can be a great solution. This worked for director of photography Travis Johansen.

“We were shooting a TV commercial for a university in Minneapolis,” he explains. “Our challenge was trying to overpower a large window — or so we thought! The set was a real executive’s office – meaning it was cramped! We were planning to run off house power with LED lighting, and to film earlier in the day (which was when the sun would be coming into the room).”

The solution: “We were able to push back his [interview] until the sun moved a bit and positioned him in a way that the light wasn’t directly competing with our subject’s key and fill. So while we thought we would use way more lights to overpower the windows in the shot, we were able to position our main character where the only lights we needed were in front of him. We dialed them to daylight to match the outside light.”

Lighting is one of the most important aspects of video production. It’s also one of the trickiest to master. The next time you face a challenging lighting situation, take inspiration from these professionals. You may have to get creative, but there’s always a solution to your lighting troubles.

For those of us who contribute daily to the motion content business, eventually you will be asked to light a large subject or group...