A RAID is a Redundant Array of Inexpensive (or sometimes “Independent”) Disks. In plain English: two or more drives linked together to make “one drive” or RAID set for an increase in speed or protection of data storage. Some RAIDs actually do both, in unison. Let’s break down a few of the different RAID configurations, talk about why you might use them and look at how you can set-up your own RAID.

Firstly, RAIDs are characterized by numbers. The most common for video editors, standard RAIDs are known as RAID 0, RAID 1 and RAID 5. But there is also RAID 2, 3, 4, 6 and 10. Beyond these eight configurations, there are Nested RAIDs as well as non-standard variants. I only have 800 words here so let’s stick with the three RAID systems most used by video editors.

Also known as “nonredundant arrays” or “data striping arrays,” this configuration distributes your data evenly across the disk drives in equal-sized sections. This gives the editor an increase in performance, mostly read/write speeds, by “striping” the data — the ones and zeros — evenly to all the drives. If you are working with mulitcam, 4K RAW video (or higher) with visual effects and motion graphics, a fast computer (CPU and RAM) with a RAID 0 is your friend. More on editing in 4K here.

If you are working with mulitcam, 4K RAW video (or higher) with visual effects and motion graphics, a fast computer (CPU and RAM) with a RAID 0 is your friend.

However, with RAID 0 arrays, there is no “fault tolerance.” In English, that means there is no protection against the many types of hard drive failures that threaten your data. See RAID 1 for more on redundancy. Basically, if one of your drives goes down, you lose the whole shebang.

This is the opposite of RAID 0, simplistically speaking. RAID 1, aka “disk mirroring,” writes all of your data to both drives simultaneously, assuming you are using just two drives. The disks are mirrored. If one drive fails, the other drive has all of the information.

One disadvantage to this configuration is that you will only “utilize” half your drive space. Say you set-up a RAID 1 with two one-terabyte drives. One terabyte plus one terabyte equals two terabytes, right? Not with a RAID 1. Because the data is mirrored, one plus one equals one in RAID 1 math. Read operations can be quicker as data can be read from both drives simultaneously but write operations will be slower as every write operation must be executed twice.

This configuration gives you the best of both worlds: striping and a type of redundancy called “distributed parity”; but it will come at a price. Though RAID 0 and RAID 1 require a minimum of two drives each, RAID 5 requires a minimum of three. And it doesn’t “mirror” the data but backs it up using a “parity” system based on a mathematical function. The configuration stripes this parity information across all of the drives. If one drive fails, all of the data can be recovered by reconstructing the information from the remaining drives. A RAID 5 has fast read performance but slower write performance.

How to set up a RAID

You can configure a RAID using both software or hardware controllers. In hardware RAID setups, the drives are connected to the motherboard via a fast PCI-Express card slot. More and more computers have the ability to set up and control a RAID via utility software in the operating system. Generally speaking, using a hardware option means less strain on the computers operating system, as well as possible other benefits depending on the hardware used. But software RAID systems are constantly improving.

Starting with Windows XP (2001), Microsoft integrated RAID functionality into its operating systems. Disk Utility on Macs let you set up RAID 0, RAID 1, RAID 10 and JBOD (Just a Bunch Of Disks). Always back up any data on a drive before using it to configure your RAID — creating a RAID erases all existing data on those disks.

The set-up is fairly simple. It usually goes something like this:

The exact procedure may vary according to your operating system, but these are the basic steps.

Hardware configurations are constantly changing. I used to have a tower with four disk bays. Now I edit from a laptop with an external, portable RAID. So you have the option to set up your RAID within your desktop computer or to work with an external configuration —that’s up to you. Western Digital, G-Technology, LaCie, LinkStation… many companies make external RAID systems.

We didn’t have room here to examine the hard drives best used to build your RAID, but you can find more information on available drives in our Storage Buyer’s Guide.

A final note: RAID is not backup. Even though many RAIDs mirror your assets, different situations can still make all of your data go bye-bye: computer viruses, human error such as mistakenly deleting data, theft and fire, to name a few. All source files should be backed up to a separate drive and stored off-site before using any of these RAID options. Happy editing. 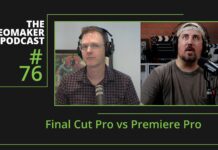