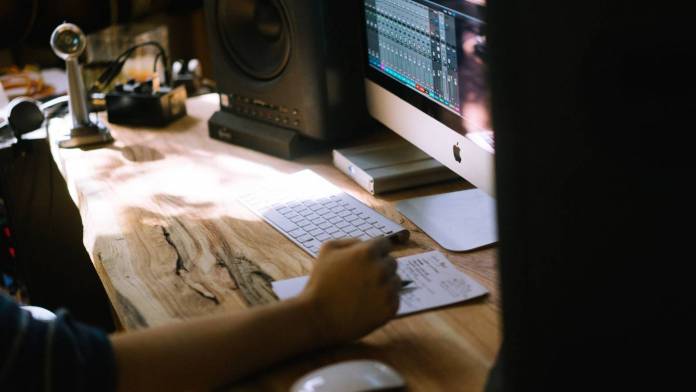 Right now, many of us can’t leave our homes to record in a professional studio. However, you can still capture great audio right at your desk. Let’s take a look at how to improve your at-home audio setup, whether your recording a voice-over track for your vlog or voice conferencing with your boss.

You don’t need a full production studio to record professional sounding audio. Sure, as a dedicated space, a studio makes it much easier to record good audio, but that doesn’t mean you can’t dedicate your office to recording as well. In this article, we will list everything you need to make your home office into a home studio.

Start by getting a decent mic

To start recording, you need a solid mic to capture the audio you want to record. Even if you already have a mic, you may still want to see if there’s another that would work better for your use. If you’re serious about getting better audio and you have room in your budget, a voice-over or podcasting mic with a stand is going to sound much better than a headset mic attached to a pair of headphones or the one built into your laptop. Check out our microphone buyer’s guide for ideas.

There are a few things we encourage to look at before choosing a mic. First, decide on whether you want to use a wired or wireless mic. It really depends on what kind of production you are doing. For instance, if you are just recording audio at your desk with no video — or if you don’t mind having the mic in the shot — we recommend you get a wired mic. Wired mics are usually more reliable than wireless ones, as well as more affordable.

However, you might opt for a wireless mic if you are recording video and want more options for hiding the mic from the camera.

Frequency response is also an important factor to look at. You’ll want a microphone that will clearly capture the frequency range of the human voice: around 85Hz to 255Hz. However, some audio engineers recommend reproduction of up to and in excess of 15,000Hz (15kHz) for the feeling of clarity.

It isn’t enough to have a good microphone. You need to know where to place it so that it will best pick up the audio you want to record. Take the time to learn mic placement techniques. You will likely improve your audio more with better mic placement than through upgrading your gear. Getting the distance right is the golden rule. You want to get the mic as close as possible to the source without getting so close that you start getting unwanted effects like popping and distortion.

While you can record yourself speaking with a handheld microphone, it opens up more potential for inconsistencies in the audio quality. Since most people won’t stay completely still while recording, it’s best to use a mic stand when recording.

If you plan to record audio at your desk, it is best to mount the mic to a nearby piece of furniture. You can also opt to use a floor-mount stand. The reason you don’t want to use the mic right on your desk is if you make even small movements during the recording, they can transfer up the stand into the microphone. It’s better to avoid any distracting sounds.

Choose a good place to record

If your office is the best place to record in then choose that room. However, if there’s a better room to record audio in, the move to that room. Choose the room with the least amount of outside noise. You want it to be as quiet as possible. Think about sounds that might come from both inside your home and outside.

If you can hear cars outside, that will be distracting. If you can’t find a quiet place in your home, try getting some acoustic panels that eliminate echo, reverb and reduce overall ambient noise. Also, think about recording late at night if that’s an option. Typically, there is less outside sound because there are fewer people out.

Get a pop filter

Pop filters can prevent unwanted sound from entering the mic. Typically when you speak close to the mic, you get what are called plosives. These pops of air from consonant sounds disrupt the components of the mic. Pop filters go around or in front of a mic and prevent this distortion from happening. There are both expensive and cheap pop filters. Usually though, even the cheap ones can make a world of difference.

After you record your audio, run it through post-production. Depending on what you need the audio for, your post-production tasks are going to look different. However, you’re going to want to have consistent audio levels throughout the entire recording. You may also want to cut out unnecessary pauses and segments if you are recording a podcast. You can also remove any unwanted sounds that happened to get into your mic.

However, it is important to know that while audio editing software can fix some things, it can’t do it all. And even if a fix is possible, it will still add extra time to the editing process. That’s why it’s better to do everything you can while recording to minimize your time in post.

You don’t need to have an expensive recording studio to get good audio. With these tips, you can capture great audio right at your desk.