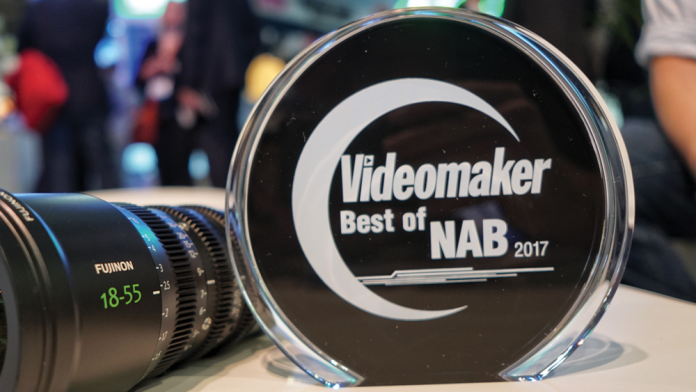 If the Manfrotto Nitrotech N8 looks a little strange, that’s because Manfrotto has replaced some of the mechanics inside a typical fluid tripod head with a nitrogen piston. The unique approach promises to provide videographers with continuous counterbalance.

Nitrotech is available for 450 dollars. It can also be purchased in a kit with either the aluminum Manfrotto 546B twin-leg model or a carbon fiber 535 single-leg model, retailing at 950 dollars and 1,180 dollars, respectively.

Zylight has partnered with NanGuang to bring the NanGuang family of LED Fresnels to the US. Like the other Fresnel
fixtures in this line, the NanGuang 400w Fresnel boasts a CRI of 95 and offers focusable beam control for flood and spot lighting. The daylight-balanced 400w model is also dimmable and features DMX control.

The NanGuang 400w Fresnel is powered using AC or standard batteries and promises silent cooling, good for use on quiet sets. Included with the light are barndoors, filters for matching tungsten balanced fixtures and a carrying case.

The NanGuang Fresnels are offered in five sizes from 30w up, with the 400w model being the largest fixture. Pricing and availability is yet to be determined as of this writing, but as part of Zylight’s entry-level Fresnel range, we expect cost to be reasonable.

This portable video streaming and recording kit comes with Datavideo’s SE-650 HD video switcher and their NCS-30 H.264 streaming encoder and recorder, all packed into a compact case that’s ready to take with you.

The SE-650 offers two HDMI inputs and two HD-SDI inputs along with two HDMI outputs and an assignable HD-SDI output. Also included is an audio mixer with a microphone and RCA audio inputs. The system can be used to achieve effects including chromakey, luma key, picture-in-picture and more.

The NVS-30 Video Streaming Server is a small and portable way to send your video from the SE-650 HD to YouTube, Facebook or other live streaming platforms while also recording the stream to an SD card, thumbdrive or network drive. The NVS-30 is compliant with RTSP and RTMP, and the device can be controlled remotely via a web browser interface.

The DataVideo SE-650 Stream and Record GoKit can be had for 2,340 dollars.

Tube Arsenal caters specifically to YouTube creators, but the service can be a boon to anyone who needs high-quality motion graphics but doesn’t want to invest time or money into motion graphics software.

The service offers HD intro and outro templates to suit virtually any production style. Once you find a template that suits your needs, Tube Arsenal allows you to edit the template’s text, color and images directly online in their web interface. This way, templates can be made to fit a specific project without the use of traditional software or plug-ins.

Tube Arsenal allows you to edit the template’s text, color and images directly online in their web interface.

There is a 7 to 9-dollar fee to use the online editor, but if you already have and use motion graphics software, you can also forgo the online editing option and download the templates directly for free. There is no limit on the number of templates that can be downloaded.

DaVinci Resolve 14, currently in public beta, adds a wealth of new and improved features to its post-production toolset. Blackmagic claims their new playback engine will increase video editing performance by up to ten times. The engine promises faster playback, lower latency and faster UI refreshes, even when working in timelines with thousands of clips. This is on top of the already-robust video editing toolset, including a unique advanced trimming tool that changes function based on mouse position.

New color tools in Resolve 14 will offer better control over skin tone adjustments with new filters along with facial recognition and tracking. The more than 20 new FX filters in Davinci Resolve 14 can also be used to remove dust, fix dead pixels and more.

Also new in DaVinci Resolve 14 Studio is a set of collaboration tools, including bin locking, chat and timeline merging. These new features are designed to allow multiple editors, colorists and audio editors to work on the same project.

In addition to improving its video editing and color tools, DaVinci Resolve 14 also adds new tools for editing audio with the inclusion of Fairlight Audio. With Fairlight, Resolve adds support for real-time mixing of up to 1,000 audio channels as well as for Fairlight audio consoles. Audio editors will also gain control over equalization and dynamics and will have the ability to add third-party audio plug-ins in this new version.

The HP ZBook 17 G4 is fully customizable to fit the needs and budgets of video editors at all levels. Supporting the latest Intel Core or Xeon processors and NVIDIA Quadro or AMD Radeon Pro Graphics, the ZBook 17 has the potential to be a real video editing powerhouse. Plus, the ZBook 17 G4 can be loaded with up to 64GB of RAM and up to 16GB dedicated VRAM.

The ZBook 17 features a 17.3-inch diagonal HD display and dual point backlit and spill resistant keyboard. Windows 10 is included, and this mobile workstation can also be configured with up to 4TB of storage, dual Thunderbolt 3 ports and an SD card reader.

The HP ZBook 17 G4 starts at 2,530 dollars, but purchase price will depend on your selected configuration options.

Now improved with Thunderbolt 3 technology, LaCie promises that their 2big Dock will offer the public faster speeds and even larger capacities.

The 2big Dock aims to simplify and centralize your post-production workflow by allowing the 2big Dock to connect directly to a laptop and access data from SD Cards, Compact Flash Cards and other devices.

LaCie says that the 2big Dock will feature 5-in-1 docking capability, USB 3.1 and dual Thunderbolt 3 connectivity, and up to 20TB storage space, adding 4TB compared to their previous model.

As of this writing, LaCie hasn’t released pricing for the 2big Dock, but they did say that the 2big Dock will be available for purchase in 12TB, 16TB and 20TB versions in summer 2017.

The SmallHD FOCUS is built for outdoor use in sunny locations with its bring 800 nit display, which SmallHD claims is two to three times brighter than the LCD screen on the average camera and has more pixels per inch than an iPad’s Retina display. The FOCUS also features simple touchscreen navigation.

The SmallHD FOCUS includes a number of professional shot assist tools such as a waveform monitor, false color and focus assist. The FOCUS can also be loaded with 3D LUTs for in the field previewing. This make it easier to shoot in Log profiles.

On top of that, the FOCUS also has an auxiliary power out, allowing cameras to be powered via the FOCUS’s attached Sony L Series battery. SmallHD claims this can extend camera run time by as much as four times. Camera-top mounting is made convenient with the included Tilt Arm, which allows the monitor to tile up to 180 degrees to accommodate different shooting angles.

This 19-inch monitor-recorder is built for use both on-set and in the studio. The Atomos Sumo can record 4K footage at up to 60p and HD at up to 240p. It’s billed as the first production monitor to record 4K 12-bit Raw as well as 10-bit ProRes/DNxHR.

Adding to the Sumo’s impressive tool kit, this monitor-recorder is also capable of live switching up to four 1080/60p channels using QuadLink SDI. Cueing, cross fades and cuts are all supported. Metadata tagging allows you to adjust your final edit in post-production.

The Sumo is equipped with a large 19-inch 10-bit full HD LCD panel with the AtomHDR engine to display 10+ stops of dynamic range. It has a 1200 nit brightness and rugged construction, promising good outdoor performance.

Measuring in at less than six inches wide, the Sound Devices MixPre-3 is designed to go with you on location. The sturdy die-cast aluminum chassis, bright color LCD display and straight-forward user interface add to the MixPre’s functionality in the field.

For DSLR videographers, the MixPre-3 also features a retractable ¼-20 mount, allowing the unit to sit conveniently between camera and tripod. A 3.5mm headphone jack allows for monitoring your recordings, and an HDMI input allows capable cameras to feed timecode data to the recorder for synchronization. The MixPre-3 can also be triggered to record with the camera over the HDMI input. The unit can be powered with AA batteries, two hot-swappable Sony L-mount batteries or over USB. An AC adapter is available separately.

The Sound Devices MixPre-3 is priced at around 650 dollars.

On top of having a fast T2.9 maximum aperture across the entire throw of the lens, the FUJINON MK18-55mm T2.9 is also designed to suppress focus shifting and optical axis shifting while zooming. This means focus will be consistent when changing framing or zooming in for better focus. FUJINON also promises minimal lens breathing.

The lens’s 85mm front diameter, 82mm filter diameter and 0.8M gear pitch have all been standardized across models. In addition, the MK18-55mm includes a macro function and the ability to adjust the flange focal distance. FUJINON also touts the lens’s lightweight and compact design; the MK18-55mm T2.9 weighs in at just over two pounds and measures around eight inches long.

The new camera also features SD card compatibility along with C-Fast 2.0 media. New codecs including Apple ProRes 4444 XQ and ProRes 4444 QuickTime have also been added, along with a lens control connector for servo-zoom lens control.

Like other URSA models, the URSA Mini Pro will offer interchangeable lens mounts including EF, PL and B4. The Blackmagic Design URSA Mini Pro is priced at 5,995 dollars.

Congratulations to all of this year’s award winners and thank you to all the brands who met with us to show off the latest in video production tech. As always, we saw so much amazing gear that it would be impossible to recognize all of our favorites here, but we nevertheless look forward to seeing how these new products will be put to use in the field.