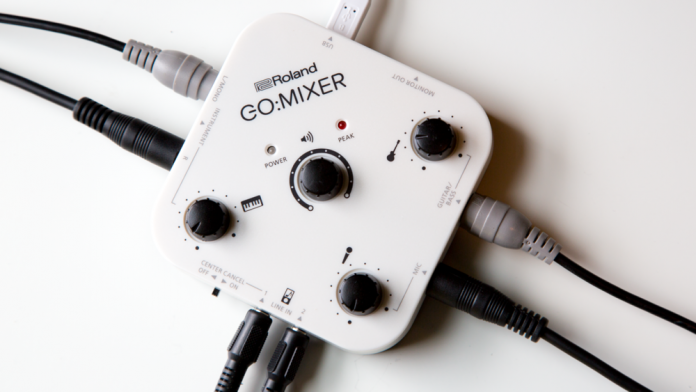 Here’s the situation: you want to do a live stream, but have limited resources. You have a smartphone, you have mics, but you have no way of getting the signal into the phone. On top of that, you’d like to have multiple inputs. What are you do to? Roland has a solution: their recently announced audio mixing input device for smartphones, the GO:MIXER.

At first glance, this product doesn’t seem all that exciting, but when you recognize its potential, its usability skyrockets. What first appears as just a mobile audio mixer is more than that. It could allow you to have a small band, all with individual input gain control, broadcast via your phone.

What Can I Use it For?

The GO:MIXER is a cool tool for just about any content creator. It allows you to use a smartphone for a recording device through its multiple inputs. That means you can input more than a mic. Say you’re a musician or band looking to record your music; you can input a mic, a keyboard and your guitar. Plus, you get input gain controls for each of those inputs. It can even enhance your next let’s play video. Record yourself, have other inputs and still maintain separate input controls.

But where the GO:MIXER really shines is social media. Use it for your next livestream and add instant production value. If you stream video from your phone you will find the mic is less than desired. Upgrade your production with better audio. Unlike some phone input devices that allow for only one mic input, the GO:MIXER gives you five inputs. Say you do a live show where you want to play sound effects, give commentary and play music. Connect your sampler, mic and media player and you’re ready to reach the masses.

In the Box and in Use

The GO:MIXER is pretty small. It comes in simple clamshell packaging and all the base materials necessary to use it right out of the box. Included are two USB connecting cables, one for iOS and one for Android. The product is straightforward and easy to use. Plug it into your device and it’s ready to go, no batteries necessary. If you’re an Android user, in order to record you’ll have to install Roland’s app “Camcorder for GO:MIXER.” Unfortunately, it’s somewhat limiting and doesn’t feature all the adjustments you might have available with your stock camera app.

Is it Any Good?

The GO:MIXER does what it’s meant to do and it does it well. It’s user friendly, featuring a individual control for all attached devices as well as a master volume control. Mixing the audio itself is quite simple as Roland added a peak indicator light which helps you avoid excessively loud audio. We liked that it had knobs to turn, rather than a digital interface. During broadcast or when recording, an easy to see and adjustable knob makes for fewer mistakes. However, every product has its limitations. It won’t allow you to record from the same device that you are playing music from, so you’ll need a separate media device. Say you wanted to play your theme music at the beginning of your show — you will need something other than the phone you are recording on to play the music. Furthermore, the input for the media device doesn't have any input gain control; it is set to one gain, requiring the media player to control the input volume.

The GO:MIXER does what it’s meant to do and it does it well.

We tested the GO:MIXER by using a laptop and a smartphone. We were able to use multiple online music sources to add audio to the background of our videos, including YouTube, Soundcloud, Spotify and multiple online music distributors–all of which were successful. If you’re going to do this as well, keep in mind copyright laws. Be sure to have rights to the audio if you intend on publishishing the video it’s in. We also tested the GO:MIXER’s “Karaoke mode” which allowed us to dampen the vocals of the audio we had playing in the video. With the addition of a microphone input we were able to record a music cover in which our vocals were all you heard, making it perfect for office karaoke competitions.

Is it Worth it?

The GO:MIXER is a unique device, and currently there aren’t any products that do everything the GO:MIXER does. But, there are other products out there that offer one or more of its features. So, let’s look at those products to know its value in the marketplace.

One similar product is the Shure MOTIV MVi. It too allows you to expand the audio inputs of your smartphone. The Motiv MVi features a single XLR and ¼ inch combination input as well as a headphone output. It has five preset modes depending on the attached audio device, as well as volume and gain controls. It costs $30 dollars more than the GO:MIXER and only offers one input at a time.

The IK Multimedia iKlip A/V Smartphone Broadcast Mount & Mic Preamp is another device that allows users to input external audio into your phone. It features a battery powered audio amplifier, a single XLR input, an integrated wireless input receiver and automatic gain control. The IK iKlip is also priced at a higher cost than the GO:MIXER at $180 dollars.

The last option we want to talk about is the Tascam iXZ which allows users to record instrument audio through a smartphone's headphone jack. It has a XLR microphone jack and a high-impedance guitar input. It’s cheaper than the GO:MIXER, costing $60 dollars, but again has fewer functions.

For its price, the GO:MIXER packs in a lot of features. Especially compared to other products that only offer aspects of the GO:MIXER. All together the GO:MIXER is well priced. It works well for its purpose of mixing audio inputs while recording with a smartphone. It works with any source of audio and it’s easy to use. We recommend the Roland GO:Mixer for anyone looking to up their smartphone audio recording capacity.

The GO:MIXER is an endlessly useful product. It’s incredibly powerful and is well-priced compared to products of a similar nature. The Roland GO:MIXER is easy to use and has got you covered for all of your smartphone audio needs.

Jenna Ploog has played the bass in three bands. She is also a tech nerd and digital arts enthusiast.