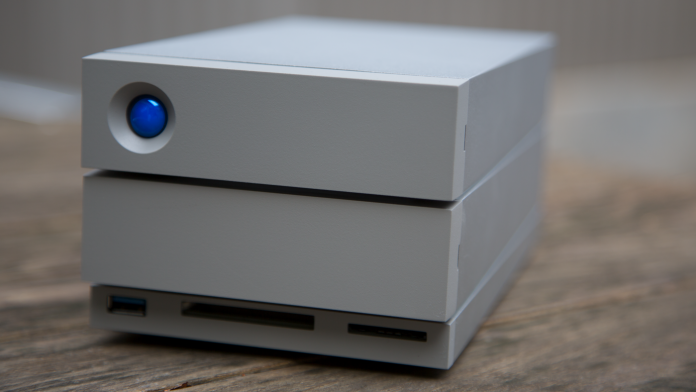 LaCie has a significant offering in their Big RAID storage line. We’ve reviewed the 12Big and 6Big, both large and fast Thunderbolt 3 RAID storage options. They also offer the 5Big, a Thunderbolt 2 RAID, and the 2Big Quadra, a USB 3.0 RAID. Regardless of the model, they all share the same presentation. They have a blue indicator light and sliver metal construction, along with a hardware RAID controller.

The 2Big Dock Thunderbolt 3 is the first in the Big line to be more than just storage. The 2Big Dock also gives MacBook Pro Touchbar users a Type A USB port, along with Compact Flash and SD card readers. Along with its two Thunderbolt 3 ports, it can also be connected via USB Type-C. It has a hardware RAID controller that can be configured in RAID 0, Raid 1 or JBOD. For those that aren’t familiar with how a RAID works, a RAID 0 configures the two drives into one larger drive. Similarly, JBOD does the same thing, however it doesn’t require that the drives are the same size. A RAID 1 is a simple mirror; the storage space is split in two, and every bit is duplicated and stored on each partition. The 2Big Dock can be formatted for Windows or Mac, but it comes pre-configured for Mac in HFS+ and in RAID 0. There are four sizes offered: 8 terabytes (TB) for $700 dollars, 12TB for $850 dollars, 16TB for $1,050 dollars and, the size used for this review, 20TB for $1,300 bucks.

The computer we used for this review is a 2016 Apple MacBook Pro 15 inch Touch Bar. If you aren’t familiar with this version of MacBook, it’s the one that has a headphone jack and four Thunderbolt 3 ports — that’s it. The 2Big Dock adds back some of the ports users the new Macs might might miss: a USB Type-A port and media card readers. Without a dock of some kind, a Macbook Pro Touch Bar user will either need all USB Type-C peripherals and accessories or they will need lots of dongles to convert Type-C to the connection they require. As video producers, a Compact Flash reader isn’t a huge benefit unless you shoot stills with a compact flash card. The SD card reader, on the other hand, is great, and so is the USB Type-A port. We would have loved to see the compact flash swapped for a CFast 2.0 card reader, since it would be used more in a video producer’s workflow.

Depending on your system, you will need to consider what formatting system you require. If you are a PC user, exFat is the best choice. For Mac users HFS+ is best. exFat is compatible for Mac users also, but it will have a slower performance than HFS+. PCs and will not be able to write or change any data when formatted in HFS+.

Considering that Thunderbolt 3 has the potential of 5,000 MB/s, we might expect to see a larger difference in transfer speeds between USB and Thunderbolt 3 connections, but there are other limiting factors beyond connection type, such as disk speed and how much bandwidth the transfer protocol occupies.

Outside of having slow read and write speeds, we saw one other issue: an inability to completely power the system while in use. LaCie claims that the 2Big Dock can power your laptop. However, when powering the computer from the 2Big Dock over Thunderbolt 3, it did not supply enough power to keep up with consumption, providing only 15W. During a period of a few hours, the full battery lost one percent of its charge every twenty minutes or so. This would not be an issue over a full day, and if you turn your computer off after use, it will charge up while off. But this is an issue to be concerned with if you desire the clean desktop that Thunderbolt 3 allows for. The USB Type-C port, on the other hand, provides 27W of power. LaCie explains why this is the case, here.

The marketplace for like products to the 2Big Dock T3 is zero. There are no other Thunderbolt 3, two drive RAIDs with the capacity range of the 2Big Dock Thunderbolt 3. Does that mean its a good value? For the 20TB option at $1,300 dollars, that equates to about 16 cents per GB. For the 8TB version it’s 12 cents per GB. A USB Type-C SD and Compact Flash card reader on a bad day will cost you $50 dollars. Outside of breaking out the parts, the value will have to be in if you require the dock and a lot of storage.

More than just a Thunderbolt 3 storage RAID, it also offers a Compact Flash and SD card reader plus a USB Type-A port. However, it did have some issue keeping up with our power consumption using Thunderbolt 3.

Chris Monlux wants to have a clean desk, but everything else seems more important. He is also Videomaker’s Multimedia Editor.