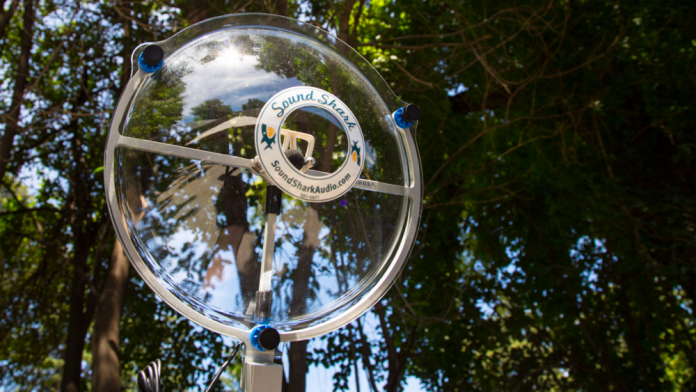 Have you ever seen a camera that offered zoomable audio? If you have, someone’s trying to pull the wool over your eyes. It’s misleading; let me tell you why. When they say zooming audio, that’s how it feels when working, but what’s really happening is the input gain is being increased in parallel with the zoom of the lens. This creates a higher noise floor and if there are any loud noises near the camera, they will be even more present.

A common setup for someone trying to achieve a louder input is to use a mic with a narrower pickup pattern. The narrower the pickup pattern, the more focused and directional the mic will be. Using a more focused directional mic is a good choice, but  it won’t bring the audio closer to you. Even with a hypercardioid pickup pattern, you won’t be able to compress the space between the mic and the sound source. The Sound Shark more efficiently collects and delivers the audio through its parabolic dish. It’s not magic, though it feels a bit like it.

We saw the Sound Shark in action at CES 2017. They presented it next to a few other mics that you might choose to use in the same situation as the Sound Shark.  That included mics like the VideoMic Pro from RØDE and other shotgun mics. Although those other mics sounded good, they work best when close to the sound source. The best use for a shotgun mic typically is on the end of a pole. Mount the mic on the camera and you’ll find they have diminished effectiveness.

The Sound Shark isn’t as large as you’d expect. It’s less than a foot in diameter and could easily be packed within a small production bag. There are a few ways to configure the Sound Shark. The Parabolic Dish without a mic costs $285. This will allow you to use your own mic if its compatable. If you need a mic included, you have a couple of options: You can get the sound shark, together with a mic, with either an eighth inch or XLR connection. You can also go a bit further and buy the LEX Premium kit to get two Lume Cube LED lights.

If you ever wanted to feel like a spy — but not a very sneaky one — the Sound Shark might be for you. But really, all jokes aside, the sound shark looks like something you would buy out of the back of a comic book. But it actually works.

It’s capability shined right away. While shooting across the room we captured a subject looking through some papers. We could hear each page turn and rustle clearly and it sounded great. More impressive yet was that there was music playing five feet away, but we could still hear the soft sounds of the paper moving.

We moved outside to see what wind and road noise would sound like when captured by the Sound Shark. It’s a highly sensitive and very directional mic. Because of that, we thought the sound of the city would be hard to ignore. Yet, the Sound Shark performed well. Not only were we able to capture a single car and have it reject other sounds in the area, it had no wind noise. It was windy — not just breezy — so working in this case is a big deal. Even with the wind blowing hard, none of it was being captured by the mic. Even when the dish was being blown around from it, the wind was still not making it through the mic.

Not only were we able to capture a single car and have it reject other sounds in the area, it had no wind noise. It was windy — not just breezy — so working in this case is a big deal.

There are a few parabolic dishes on the market, but most of them are for surveillance not audio for video. Add that to the small size and the Sound Shark is on an island all alone. But, since there is at least one competitor, let’s talk about that too.

The Jony JonyShot 24″ Parabolic Microphone Dish is the closest product we could find. It’s the best apples to apples comparison to compare with the Sound Shark, but it’s much more money at $1,320. That’s nearly a grand more than the Sound Shark. Then add in that it is only the dish, no microphone included. Plus, it’s double the size. This is a less viable option, considering its price.

The Sound Shark feels like it has a touch of magic with a dash of 007. It works very well, and would be a better choice than a camera mounted shotgun. Its small size makes it easy to pack and it sounds good. We would recommend the Sound Shark.

The Sound Shark is a parabolic dish with a mic connected to it. It narrows the pickup pattern and amplifies what it picks up via the dish. It captures fine details and isn’t prone to wind noise.

Chris Monlux had a fear of sharks when he was a kid. He is also Videomaker’s Multimedia Editor.