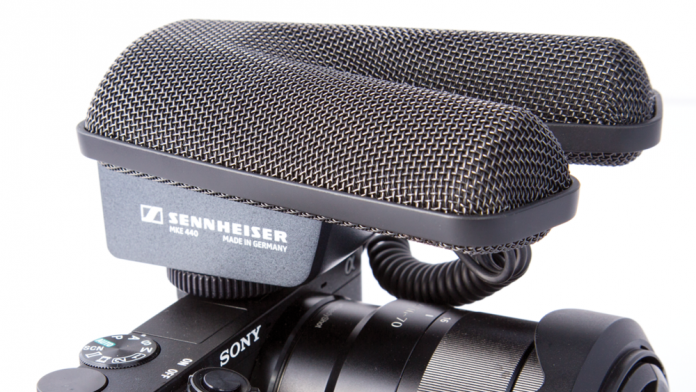 This strange V shaped mic beckoned us into the Sennheiser booth to take a closer look. We shared a picture of it on our Instagram page and created a short video for Facebook and the world’s response to it was similar to ours: “Tell us more”.

Our ears give us directional hearing, and the MKE 440 is an attempt to reproduce that human hearing experience.

The MKE 440 is different from other stereo camera-mounted mics on the market. With the MKE 440, Sennheiser made a dual shotgun mic by combining two directional mics into a stereo array. It costs $350. You’re typical camera-mounted stereo mic is in an XY configuration, giving a wide spatial recording direction. The MKE 440 is meant to capture the audio that’s directly in its field of view and reject what isn’t. Sennheiser explained it to us as a mic to best capture the hearing perspective we as humans have. Our ears give us directional hearing, and the MKE 440 is an attempt to reproduce that human hearing experience.

The mic itself is super simple. It’s made of metal and hard plastic and takes 2 AAA batteries. The MKE 440 also has a built-in coiled cable with an ?-inch tip ring sleeve connector, a power switch, a low pass filter and a 3-way sensitivity adjustment. Because it’s mostly metal, we’d suspect the MKE 440 will have a long life if treated well. We would have liked to see a detachable output cable so it could be replaced later if needed. That would prolong its life significantly, as the cable will most likely fail first.

Being that the MKE 440 is a new mic type, we wanted to put it thoroughly to the test. We started first by trying to find its best use case and also find out what it’s not good for. We were pleased the day that it arrived, just prior to a trip to Manhattan. We took it with us to see how it did when compared to another stereo mic, the Røde Stereo Videomic Pro. The main difference between these two mics is their stereo configuration. The Røde is a more traditional XY-configured stereo mic. We equipped ourselves with a Panasonic GH4 and set out to shoot some city soundscapes.

Whenever we’re using an external mic, we try to use as little of the gain in our camera as possible. We set the mic to its highest output then gain down the camera till we have the right signal level. This ensures we’re using the camera’s mic preamp as little as possible. Most cameras don’t have the best sounding pre-amp.

Setting out near the Empire State Building, we walked the streets capturing like-moments with the Røde and the Sennheiser so we could A/B test the results. We found that, with the MKE 440, the left and right weren’t as separate as with the Røde Stereo Videomic Pro. This makes perfect sense because the MKE is two directional mics, not an XY configured mic, so the pickup direction would be limited to forward giving cancellation to the sides and rear.

The next test we put the MKE 440 through was in the studio. We moved around the room to see if there were any positions relative to the mic that offered more rejection. We again tested this to the Røde Stereo Videomic Pro but added in the Azden SMX-30 in mono shotgun mode. When it came to a stereo sound, it went from a wide pick-up area of the Røde then narrower with the Sennheiser and most directional with the Azden. The takeaway is that the MKE has a broader area of pickup than a mono shotgun mic but not as broad as a XY configured stereo pair.

We next wanted to see what the best use case of the MKE is, since the Azden, as a mono shotgun, made even off axis audio sound as good or better than the Sennheiser. Two of us stood in front of the MKE 440 ten feet away and ten feet apart and the benefit of the MKE became apparent, but not in a substantial way. We still would choose a mono shotgun in this situation. From there, we needed to see if the distance from the mic made much difference. When three feet from the mic, the audio captured  from the MKE 440 was best. This is the best use for this mic: a close interview of two people.

We tested the Sennheiser MKE 440 against the Røde Stereo Videomic Pro and the Azden SMX-30. Neither are an exact stand-in for the Sennheiser because it’s so unique. The Røde is $300 and is a different kind of stereo mic from the Sennheiser. Because of this, you wouldn’t buy this and replace your need for the MKE 440. It sounds good, but has a different use.

The Azden SMX-30 is $250 offers both an XY stereo mic and a mono directional shotgun in one. Flip a switch between the two modes and you have a multitool that would easily keep up and in most cases beat the MKE 440.

Lastly, the MKE 440 is $350, $50 and $100 more than the Røde and Azden, respectively. There is a super-niche set up where the MKE does a better job, but outside of that, the other mics offer a better value and performance.

The MKE 440 sounds great. It’s really nicely built of metal and seems quite tough. It is the only mic like it on the market, so its number one in a pool of one. It sits between two different product types on the market and those can be found for very little or quite a lot of money. You will pay a premium for the Sennheiser name and the newness of the product. At $350, it was the most expensive of all the mics we tested it against. If you plan on shooting with an interchangeable-lens camera, want a hot/cold shoe mic for capturing a wider direction than a normal shotgun would give you, then bob’s your uncle and the MKE 440 is for you. Though we think its best uses are limited, we found it to work well in those scenarios.

Chris Monlux thinks It’s a huge pleasure of his to test out mic’s for you. He is also Videomaker’s Multimedia Editor.