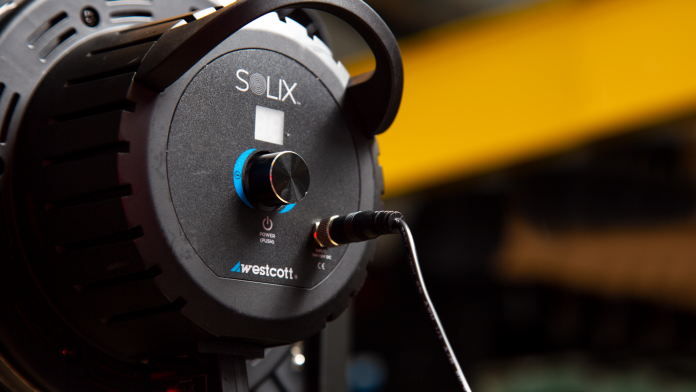 There really isnÃ¢ÂÂt anything quite like Westcott Solix available on the market right now. The Solix is a portable round LED fixture that connects to a wall outlet for its primary source of power. This give the light a unique compact form factor; it proved to be somewhat of a challenge to compare the advantages and disadvantages that the Solix offers over other lights. ItÃ¢ÂÂs trailblazing new territory in light production.

Nevertheless, we found the Solix to be a solid LED thatÃ¢ÂÂs capable of operating in a number of situations with a reasonable price tag of just 449 bucks.

One of the high points of the Solix is its sheer simplicity. Out of the box, the Solix was pretty much ready to go. Once we had the light fastened to a light stand, all we had to do next was attach the SolixÃ¢ÂÂs included frosted diffuser cap and barn doors. Both accessories attach magnetically, so those pieces were on in a matter of seconds. The magnet system actually works very well; the cap and the doors snap snugly into place and donÃ¢ÂÂt shift unless you intentionally move them. After that, all that was left was to plug it in.

Their entire setup is so simple that even people whoÃ¢ÂÂve never touched a light in their lives should be able to figure out how to put the Solix up without any guidance.

The light also includes an integrated speedring that can rotate a full 360 degrees and has clearly marked connection points for attaching things like strip banks and softboxes. ThereÃ¢ÂÂs also a receptacle near the bottom of the light for attaching umbrella mounts.

The brightness on the Solix is adjustable through a dual-purpose dial located at the back of the light that controls both the power and dimming. The SolixÃ¢ÂÂs brightness range, which is displayed on a small screen above the dial, runs from 0 to 100, but that doesnÃ¢ÂÂt mean that the light dims from 100 percent all the way down to zero percent. In our tests, we found that the Solix can ultimately only go up or down two stops across its entire brightness range, meaning you may not always be able to get the light as dim as you need it to be.

With its diffusion cap on, we found that, at about a seven foot distance, the Solix ran at 200 lumens at its lowest brightness level and went to up to 795 lumens at its highest. You can remove the diffusion cap for a brighter light, if using a softbox.

The Solix runs at 5600K and unlike with a lot of LEDs, that temperature is fixed, meaning thereÃ¢ÂÂs no way to adjust the color temperature on the device. This does make the Solix slightly less versatile when compared to other options, but this isnÃ¢ÂÂt detrimental to the lightÃ¢ÂÂs overall value. You just have to be aware that it can only be used for daylight lighting unless you use color gels, which can be attached using the magnetic diffusion cap or barn doors.

The Solix is a soft light, so it works best as a fill light where you need soft shadows and wrappy light. In our studio, we found that the Solix filled in the shadows of the subject in question with a soft and pleasant transition from light to dark. We also saw that it kept the micro-shadowing soft Ã¢ÂÂ besting some of our other studio lights, including WestcottÃ¢ÂÂs Flex.

The Solix is a soft light, so it works best as a fill light where you need soft shadows and wrappy light.

Though the Solix can be used in other lighting positions beyond the fill light, it doesnÃ¢ÂÂt work as well. Since itÃ¢ÂÂs a soft light, itÃ¢ÂÂs not nearly as effective as a key light or backlight. You can use a soft key light, but for those doing dramatic narrative work, the Solix would fall flat as a key light because it canÃ¢ÂÂt achieve stark shadows.

The Solix is fairly light to carry. The light itself weighs just 3.3 pounds. It also comes with a nice carrying case thatÃ¢ÂÂs compact enough to easily lug around, but also sturdy enough to keep the light safe during travel.

Portability is put on the back burner when it comes to power source. The Solix is AC/DC operable out of the box, but Westcott does offer a battery pack for the Solix. The battery has to be bought separately for an extra 319 bucks, almost doubling the SolixÃ¢ÂÂs 399 dollar total price.

When you get the Solix Compact Kit, which is what we received for this review, you will get the Solix light head, a travel case, a frosted diffusion cap, barndoors, a PowerStrap by Tether Tools, a power adaptor and a power cord. It costs a total of 399 dollars.
Like we said before, the portable D-Tap battery pack is going to cost you an extra 319 if youÃ¢ÂÂre looking to take this portable LED out to locations where there isnÃ¢ÂÂt an outlet available. You can also tack on a D-Tap Cable for 39 dollars and a 10-foot stand for 59 dollars.

ItÃ¢ÂÂs tough to compare the Solix to other lights because itÃ¢ÂÂs really in a class of its own, so weÃ¢ÂÂll compare the Solix to another lightweight light from Westcott, the Flex. Both lights run at a color temperature of 5600K, but the Solix just inches out the FlexÃ¢ÂÂs CRI rating of 95 by sporting a CRI or 96. Both are portable, but the Flex is actually lighter than the Solix. The Flex costs 700 bucks, making it about 350 dollars more than the Solix, and it doesnÃ¢ÂÂt include its available battery pack. Overall, youÃ¢ÂÂd be saving money with the Solix and would be getting about the same, if not a better, quality of light.ÃÂ Another portable light we can compare is the Ikan Mylo. It comes in options of bi-color or daylight, adding some flexibility. The Mylo is portable at 6 pounds, and it costs 550 for the daylight model or 600 dollars for the bi-color option. While it is slightly more expensive than the Solix, the bi-color model offers a good value and is more versatile.

The Westcott Solix is a great soft light thatÃ¢ÂÂs easy to use and highly portable.ÃÂ  With its solid color rendition, the Solix is a good option if you need an affordable soft LED light.

For what the Solix strives to be, it succeeds. ItÃ¢ÂÂs a great soft light that gets the job done. ItÃ¢ÂÂs both easy to use and highly portable. ThereÃ¢ÂÂs also nothing like the Solix and for just $319, the Solix positions itself to be a great addition to any studio or set production. 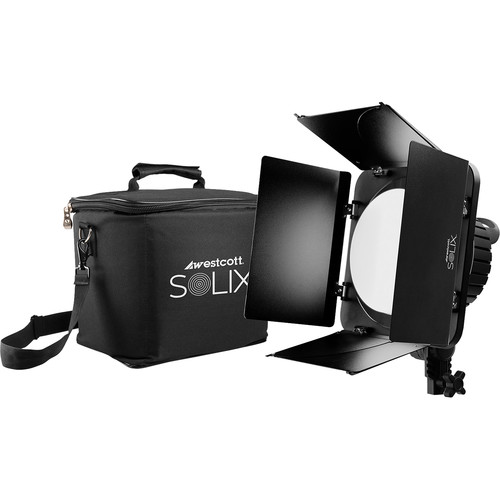 Sean Berry likes to make up his own words when he canÃ¢ÂÂt find ones that fit. He is also one of VideomakerÃ¢ÂÂs contributing editors.