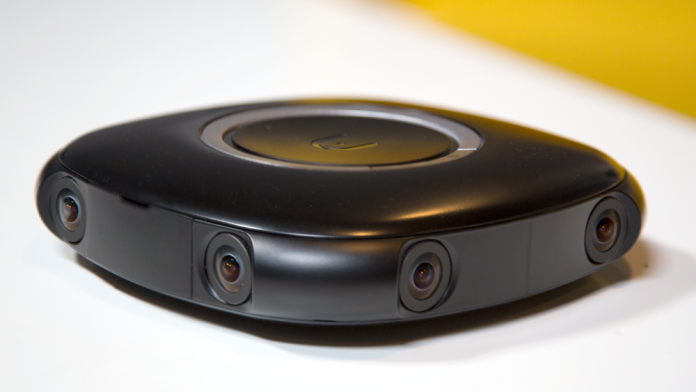 Equipped with eight cameras, two for each eye, the Vuze is a turnkey 3D 360 camera. It captures UHD 4K in 30p per eye. The Vuze camera includes everything you need to get the video out of the camera and into your editor, and it also shoots stills.

The Vuze 360 costs $800. That might seem like a lot but, if you understand what’s inside, it’s very affordable. Equipped with eight Sony image sensors, that’s eight cameras in one. It has four separate built-in mics for immersive audio and captures everything onto one microSD card. There is no in camera stitching, so each camera captures a separate file. Because they are separate files, stitching software is required to conform the separate video clips into one.

The Vuze camera is splash proof and dust tight, so getting it into the mix of things is possible. There is a 1/4"-20 thread on the bottom of the camera for mounting to a tripod or stand. With built-in Wi-Fi, you can control it with the app via a phone or tablet.

We were able to see the workflow of the Vuze 360 while at CES, and it seemed too good to be true (but more on that later). When we got to see what it captured, it was a unique experience. Outside of two shots within the demo, the perspective gained from 3D was interesting and obviously a stand-out feature. Although subtle, the added depth 3D offers creates a more real feeling when compared to 2D 360 video.

The Vuze 360 is an odd looking flying saucer of a camera. It's a bit difficult to photograph, but is really easy to use. When it first arrived to Videomaker HQ, right away we were able to capture 360 video and with very little effort, stitch it and create a final clip. At this point in 360 video, the best outcome requires a full end-to-end product. Their purpose-built software knows where the stitch points are, but gives you little control over them.

Once we dove a bit deeper, we began to understand the limitations of the camera. The first is that it’s so simple, if you want or need more flexibility, too bad; it’s simple and will do everything for you. It was most apparent when trying to deal with an imperfect stitch. Within the software, you just mark a keyframe, the software thinks, and poof — it's fixed. Or is it?

The biggest problem we experienced with the auto-stitching was when something is too close to the camera. When Humaneyes showed us the camera at CES, this was the first point they made about the camera. A stitch free shot requires subjects to be three or more feet from the camera. We’d recommend keeping anything away from a five foot radius around the camera. 360 Video isn’t like producing anything else, every 360 camera we have used has had a different workflow, but all share the same problem: get too close and you’ll see the stitch. When you need to adjust the auto-stitch, there are just three options to choose from. Though it gives you three feathering options, they aren’t very different from one another.

360 Video isn’t like producing anything else, every 360 camera we have used has had a different workflow, but all share the same problem: get too close and you’ll see the stitch.

Once the limitations of the camera is identified, it’s then that the best shots can be made. Keep the stitch points out of important areas of the scene and you'll get the best results. With the Vuze 360, keep subjects directly away from the corners. A problem that many 360 cameras have is that the tripod or stand holding the camera always looks strange because it’s so close to the camera. The stitching software will allow you to put an image to patch over the stand area. Or, you can take it a bit further and replace the area with a picture of the flooring to make the stand disappear.

Shooting an intersection with a four-way stop light during heavy traffic, we positioned the Vuze on one of the street corners. In the scene was the intersection, and a small strip mall. With ample space between the camera and any subject matter, the image looked great. The resolution was good, and everything looked natural. The added depth to the scene from 3D was welcomed.

One thing we struggled with while shooting the VUZE 360 is keeping the lenses clean. This is common for 360 cameras because there are lots of lenses, but because of the hockey puck shape, keeping a hand or finger off the lenses is hard. Once we identified this as a problem — unfortunately after we got back to review the footage — we brought a lens cloth with us and made a habit of cleaning them before every take, just to make sure. A smudge on a lens looks bad and could affect the stitch.

You control the camera via an app. The function of the app is to change the settings and control recordings. It doesn’t have a preview, but will let you review past shots. To use this for a preview, we would snap a photo, review it then make any needed adjustments and repeat the process until the scene was as it needed to be. Use the app to arm recording, and you’re off to the races. We would have liked to see live previewing abilities, but our work around was simple.

While going through the camera's options, which by the way are limited, we discovered a problem that Humaneyes quickly resolved. When we upped the bitrate to its highest offering of 120MB, the camera would record for five to fifteen seconds and then stop recording and turn the camera off. Immediately after notifying Humaneyes, they sent us new firmware, the one they said that will ship with the camera. Once installed, everything began to work as expected. It wasn’t even hard to install. After the update, we neither observed nor experienced any additional problems.

The Humaneyes Vuze 360 3D camera is a great entry-level 360 camera. It has enough resolution that 360 viewing isn’t pixelated. The camera works simply and easily, but professional control is nowhere to be found. Is the 3D aspect of the camera a bit gimmicky? Yes, but it’s not a detriment to the final product as adding in the third dimension does not affect resolution and results in more depth to your image. The whole package from camera to software is easy to use and is a great way to learn and get into 360 video.

The Vuze 360 is easy to use and the video it produces looks nice. We would have liked more control when stitching, but for the money, it offers great value.

Chris Monlux gets motion sickness easily. It’s not a good idea to put him in the backseat of the car. He is also Videomaker’s Multimedia Editor.