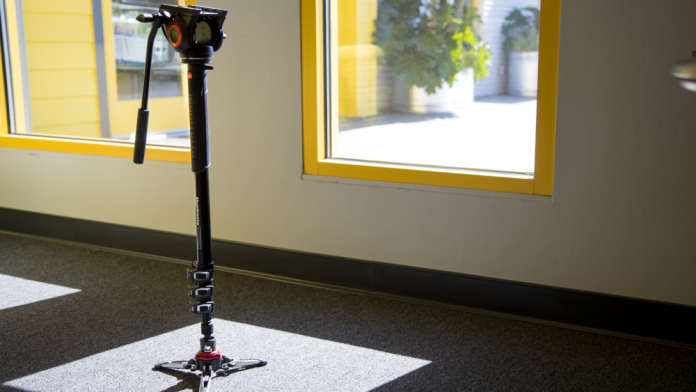 Immediately after NAB, we began to pester Manfrotto to get one in to review. Fast forward to the end of 2016 and they began to hit the market. Between pre-orders and high demand, they sold out almost immediately. Because of its popularity we had to wait for the next production run to get our review unit.

Having a monopod that stands on its own is fantastic.

In the meantime, Libec released the Hands-Free Monopod (HFMP) with a similar design. Since we were still waiting for the Manfrotto, we decided to review the Libec. Having a monopod that stands on its own is fantastic. Everyone's arms get tired when carrying a camera around everywhere. It's nice to be able to get a load off and let the camera stand on its own. By the time that we got in the HFMP, Manfrotto was ready ship out our review unit. Before the Manfrotto Xpro showed up though, we had already put the HFMP through the paces. We thought that this would give us the opportunity to compare and contrast the two. We set out to answer: are they worth buying, and who does it best?

Made from aluminum and weighing around four and a half pounds, the Manfrotto Xpro is not a burden to carry around. Its super tall when fully extended. When first using the HFMP, we thought it was tall until we fully extended the Manfrotto. The Libec is tall, standing six feet, two inches, but it’s not the tallest. The Xpro is over 6 and a half feet tall. That's taller than I am, and I stand six foot three inches. We wouldn't recommend letting either monopod stand on their own when fully extended. You're just asking for it, having a camera up that high.

Every year, we take a trip to Las Vegas for the National Association of Broadcasters show or NAB. While we are there, we shoot the show’s newest and coolest products and report them back to you. In the past, we lugged around a tripod or monopod bag to the airport. Then we check it and then hope everything is good on the other end. As you might know, some products aren't tough enough to make it in one piece. For this reason, we try to travel with only carry-on baggage. When choosing our camera support for the show, our hope was that we would be able to pack it into our carry-on bag.

For our use, we decided we wanted to use a monopod, not a bulky tripod. We had two monopods to choose from, the Libec HFMP and the Manfrotto MVMXPRO500US Xpro. After disassembling them to their smallest form factor. The Manfrotto fit; the Libec, did not. But, more on that later.

The foot of the Xpro screws off, and if you’d like, the monopod can be used without it. It even came with a rubber foot for what remains after the foot is removed. The head is very easy to remove. Because the foot is fluid, the head does not have a panning motion, so the head screwed right off. Although the foot is fluid, giving the monopod fluid pan movement, it feels different than if the fluid pan movement occurred at the head and not the base of the unit.

Its rare we have a perfect product to compare to. In this case, the Libec HFMP should be on your radar. When bought as a kit with the head included, the HFMP is 260 dollars. We’ve already covered some of the differences, like the difference in maximum height. Remember when we said we'd talk about traveling with either tripod? The HFMP wouldn't fit in our bag, even when fully disassembled. That made our choice of which one to bring easy. The Libec is mostly made of plastic, while the Manfrotto is mostly metal. The foot on the Libec HFMP is larger, but isn’t any more stable, and the Libec is longer than the Manfrotto when completely collapsed.

Where the Libec has the upper hand on the Manfrotto is in having a fully fluid head. Manfrotto splits up the fluid action between the foot and the head, so you’ll end up panning with the foot and tilting with the head when using the Xpro. That said, the pan and tilt operation on both gives nearly identical results.

Locking the feet so as not to swivel is easier with the Libec and is hands-free. The Manfrotto locks, but requires you to use your hands to lock and unlock. How the Manfrotto’s tripod plate connects to the head is easier to use than the Libec.

The Manfrotto MVMXPRO500US Xpro is a flexible tool. It will improve your shooting capabilities. We like its build quality and that even though it can extend to be very tall. Despite this, it collapses to be small enough to fit in a carry-on bag. The three-stage legs make getting the right height a cinch, and for $300, it’s a good investment.

The Manfrotto MVMXPRO500US Xpro is a monopod that can be as tall as six feet, six inches or as small as 30 inches. It can stand without the help from the operator and will fit into a carry-on. It has a fluid head and fluid feet for full fluid pan and tilt operation.