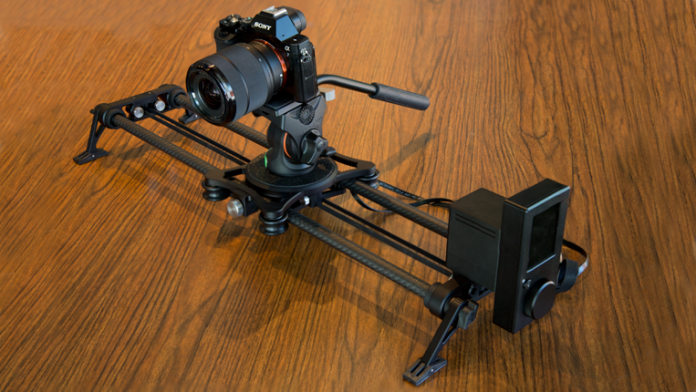 The EVO comes in a few different configurations with your choice of length and material type, ranging from 24 inches all the way to 48 inches. The weight limit ranges from 15lbs to 100lbs, depending on if you go with the carbon fiber or stainless steel rails. The flywheel can be partnered with the slider for better inertia, giving better control for a smoother outcome, or use Rhino Motion for motorized live motion or time-lapse with motion control.

The configuration for this review is the carbon fiber rail 24-inch Slider EVO, Flywheel and Rhino Motion. Arriving in 3 boxes, it was like Christmas morning. None of the three had outside packaging, just plain white boxes. We assume the retail packaging provides more to look at, but the lack thereof made the unpacking that much more fun.

The slider came fully assembled with rails, slider, belt and connecting appendages. The Flywheel box felt like a brick, weighing 1lb 7oz. Lastly, we unpacked Rhino Motion. Both the Flywheel and Rhino Motion connect to the slider using the same connection point, so you can use either, but not both at the same time.

The Flywheel was simple to attach. It takes only one thumb screw to get it ready to go. Having used many different sliders from different manufactures, the Flywheel made smooth and slow movement very easy. For only $75, it’s a great value. Because of its cost, and how nice it makes any movement, we’d recommend it for all manual use of the slider; it’s just too big of a benefit for the money to pass up.

It’s quite nice that the Slider EVO comes ready for motion attachment. Being that the slider we tested — the Rhino Slider EVO Carbon 24-in — is just $500, some brands would have made a more expensive version instead of making their most affordable option expandable. There are two thumb screws that firmly attach the motor to the slider, making assembly painless. The motion controller itself, or the brain, attaches with magnets to the side of the motor. The brain communicates to the motor via a 8P8C connected cable. Straight out of the box, the brain was fully charged, so we got right to using it.

Outside of the 8P8C connection, the brain has a microSD slot, shutter control port and a place to connect the AC adapter. If it needs a firmware update, download the update to a microSD card and plug it into the module. Then in the settings, choose update from SD.

Going through the process of setting up the motion control unit takes just a few steps. You choose the model of slider you are using, then choose if you are going to shoot a motorized video slider move or a time-lapse. If you are doing time-lapse there are two options to choose from: either simple time-lapse that just controls the slider or advanced time-lapse mode where the brain controls the camera as well. In the case of advanced time-lapse, you will need a shutter control cable that matches the manufacture of your camera. We tested the time-lapse control with both a Canon 5D mk III and a Sony a7.

Within minutes of unpacking the equipment we were ready to go shooting. When shooting with a slider, especially one with a span of only 24 inches, it’s important to choose shots with multiple layers of depth. An object in the foreground to come out from behind or to move to will give more context to the movement of the shot. If shot too wide, it won’t look like you're moving at all.

We first shot video with the Flywheel attached. Because of the carbon fiber rails, the whole assembly was light and easy to move around. Even the slowest move was smooth, and we were able to get the shot the first time with almost every setup attempted.

The only issue we came across was that the legs for the slider have feet that pivot and can sometimes get in the way. When the legs are stowed away under the slider, the feet can pivot into the flywheel, giving unwanted drag. Once we determined the problem, every time we felt it happening, we just moved the foot out of the way. However, just about every time we moved it, we had to check, so if shooting fast is part of your gig, then make checking the clearance for the flywheel part of your set-up process.

We then moved on to shooting some time-lapse. The art of time-lapse is one that requires time and patience, as not all ideas come out as planned. With the commitment to getting the shot regardless, we got to work. Weather always makes a good subject because it is constantly changing and gives the feeling of time passing. Interesting clouds work best; they show up well as they pass through your shot. Another technique is using long exposure times to make moving things blur across the screen. Lastly, sunrise or sunset will give you a ramp up or down in light, also giving a good feeling of passing time.

Using the same technique we used when shooting video, we shot time-lapse pulling away from something interesting in the foreground. This allows for a wider shot that still communicated the movement. We started with a short time commitment time-lapse and exposed for one second for each frame.

When setting the exposure time and the amount of time the Rhino Slider EVO takes the camera to cover the span of the slider, Rhino Motion does the math for you, giving you the duration of the shot when finished and how long it will take to shoot. This is very handy, as many intervalometers just give you the exposure controls, requiring you to do the math for your required duration and to determine how long it will take to shoot. This feature was one of our favorites because it made a complicated task like motion time-lapse into something most anyone could handle. We quickly learned the best way to achieve our artistic vision with just a 15 minute time commitment.

Lastly, we used the motion control to do the movement of the slider when shooting video. There are two options for live motion control: create a move by putting in how long you want the move to take or manually control the move with the dial of the brain. Both are easy to set up and work flawlessly. With Rhino Motion, we see no need to manually control the slider yourself without the motor. With Rhino Motion,  you can get flawless moves with precision every time.

The Rhino Slider EVO is lightweight and easy to use. When teamed up with Rhino Motion, you have a very strong storytelling tool for $1,100. It’s an affordable option to those that are looking to invest in a slider or motion controller. If a motion controller isn’t for you, then the Slider EVO and the Flywheel make a great team for $575 together. We would recommend both the Rhino Slider EVO with Flywheel and Rhino Motion. The added value to your production will greatly outweigh its cost in the long run.

Starting as a Kickstarter campaign, the Rhino Slider EVO and Motion Control system is an affordable and fully capable addition to any production arsenal.

Chris Monlux named his dog after the band Wilco. He is also Videomaker’s Multimedia Editor.