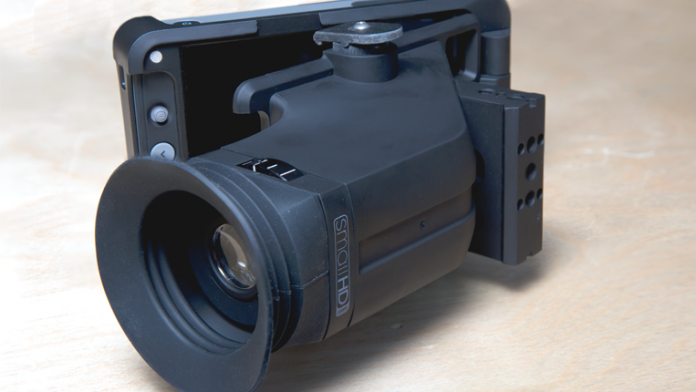 They say that seeing is believing. Nowhere is this more true than with on-camera monitors. On a shoot, a low quality monitor can lead to out of focus shots, inaccurate color settings, and worst of all — a bevy of sleepless nights for the editor who is tasked with repairing it all. These are some of the reasons why SmallHD set out to create a new lightweight LCD monitor and viewfinder that they’ve christened the 502 and Sidefinder.

With a resolution of 1080p on a monitor only 5 inches wide, SmallHD claims that the 502 is the lightest and sharpest 5-inch camera top monitor in the world. With an incredibly dense pixel count and a handy optional viewfinder to boot, cinematographers now have the perfect set of tools for capturing the perfect shot.

When SmallHD began planning the design of the SmallHD 502 and Sidefinder, their two overarching goals were to make it small and durable. On inspecting the monitor for the first time, we can honestly say that they’ve done exactly that. Have you ever braced yourself to pick up something that looked heavy only to look surprised and foolish as you stood up with it way too quickly? To our chagrin, that was our first experience with the SmallHD 502. Once we got over the awkwardness of picking the 502 too quickly, we instantly realized the potential that the lightweight monitor afforded cinematographers. By weighing only a little over half a pound, the SmallHD monitor was perfect for mounting on the hot shoe of a DSLR or a hand-held gimbal like the DJI Ronin, where staying light-weight is a huge issue. In addition, that our monitor never slipped on the 1/4-20 threading that it was mounted on — a common problem with heavier monitors mounted to gimbals or extension arms.


By weighing only a little over half a pound, the SmallHD monitor was perfect for mounting on the hot shoe of a DSLR or a hand-held gimbal like the DJI Ronin, where staying light-weight is a huge issue.

Besides the diminutive size, the other distinctive aspect of SmallHD’s 502 monitor was its solid build. The SmallHD 502 is manufactured with an aluminum sub-structure and a hybrid plastic and rubber material that coats the entire outside of the monitor. We really liked the feel of the hybrid rubber material as it felt more solid than traditional rubberized coatings while still giving the entire monitor a solid non-slip surface to hold on to. As an added bonus, the flexibility of the material kept the 502 and Sidefinder from getting the dents, scratches and body damage that traditionally occur from improper packing or short falls to the ground.

Build quality is important in an on-camera monitor, but what gets us really excited is how it looks. Fortunately, the SmallHD 502 has that aspect covered. The 502 has an LCD monitor that packs 1920 x 1080 pixels into just 5 inches of screen space. That means the SmallHD 502 has a higher pixel density than the iPhone 6 at 441 pixels per square inch. That also means that the monitor looks absolutely gorgeous — a fact that SmallHD playfully points out by using a scandalously thin font on their welcome screen.
Where most monitors would resort to jagged or blocky lines when trying to display text that thin, on the 502 the text looked smooth, crisp, and sharp. The pixel density did more than just render great looking text though, it made focusing easy too. Though the monitor came with helpful overlays for peaking and focus assist, we almost never used them since finding focus was so easy to do on the pixel-dense 502.

Colors looked amazing on SmallHD’s monitor. This is probably due to the fact that the SmallHD 502 can display 85% of the NTSC Color Gamut. This is actually a wider spectrum than the popular REC 709 color standard and it certainly showed. When we tested the monitor against a RED Scarlet’s monitor, the color looked as good or better than what RED was able to produce on their high-priced 5-inch touchscreen. Even better yet, we found that the SmallHD monitor was actually brighter than RED’s screen which made it easier to shoot on when we were out in bright sunlight.

When it came to powering the unit, SmallHD was kind enough to conveniently use 2 Canon LP-E6 batteries. Doing so means that batteries for the SmallHD 502 will be incredibly cheap and easy to find. It also means that the sizeable market of Canon enthusiasts will be able to use their existing batteries to not only power their cameras, but to power the 502 as well. What we really liked was that even though each monitor had two battery slots, it was possible to power the unit with only one battery at a time. This is convenient for those who like being able to hot swap batteries during long days of production.

That being said, we weren’t terribly excited about the lack of a battery percentage indicator on the screen. Instead, we found the only way to know how much battery was left was to go a few levels deep into the menu system. This meant that we often found our screen turning off without a warning, which was a bit annoying to say the least, but SmallHD assures us that a new version of the firmware solves this issue.

One area where SmallHD excelled was with their accessories, inputs, and outputs. As for mounting accessories, there’s a 1/4-20 thread on the top, bottom, back and right side of the monitor as well as on the top, bottom and back of the Sidefinder. On the top of the SmallHD 502, there is a power button, an SD card slot for saving color profiles and user presets, and a screen capture button for saving photos. On the bottom of the monitor, there is a USB 2.0 port for updating firmware and a headphone jack for monitoring sound. The back of the unit is where you’ll find the HDMI input and output jacks, and an SDI input and output for daisy-chaining monitors together. Lastly the front of the monitor has a joystick and a back button for thumbing through menus.

Though a thumbstick sounds like a 20th century concept, it proved to be one of the most clever and fun parts of the SmallHD 502. This was not because the mini-joystick worked quickly and flawlessly when accessing menus — which it did — but because the team at SmallHD actually programmed the classic and much loved game of Pong into the software for people to practice using the joystick. Needless to say, we could hardly imagine a more fun way to go through what might typically be a lackluster joystick tutorial. Better yet, the 502 came with a Bluetooth controller that could be used to access the menus without having to open up the Sidefinder or touch the SmallHD 502 monitor at all. We found this to be the perfect tool for those using a hand-held gimbal. One could just simply use the included velcro strip to attach the remote close to where the operator’s thumb would be on the gimbal so that the operator wouldn’t have to put the gimbal down to change overlay settings on the 502.

Let’s be honest, most camera systems come with a fairly decent monitor. So what makes third party monitors like the 502 and Sidefinder worth the $1,499 price tag? Real-time overlays. For whatever reason, most DSLRs lack and kind of video overlay like zebra bars and waveform monitors in their camera software. That’s what makes monitors like the SmallHD 502 so handy.

The 502 includes user-friendly menus that allow you to choose which overlays you’d like to assist you in getting the perfect shot. The monitor has overlays for false color, waveform monitors, zebra bars and histograms for gauging exposure, vectorscopes for color, focus assist and peaking for getting focus just right, aspect guides, action safe guides, crosshairs, and crosshatching for nailing your framing, meters for gauging the volume of your audio, image overlays for matching multiple takes, and LUTs for matching color between cameras. The monitor lets you scale into any image to check focus and exposure just by clicking in the joystick and moving up or down in your video feed.

Another common feature of a good monitor is the ability to manually control the image that you’re seeing. SmallHD has included a ton of options to do just that. By moving the joystick to the left, a monitor setting window appears where you can change headphone volume, backlight settings, rotate or mirror the video image, change the pixel aspect ratio, and scale into a DSLR’s HDMI feed. Not only that, but with the newest firmware update, it’s now possible to convert an HDMI input to an SDI output and vice versa. We were also impressed with SmallHD’s page system. This system is similar to having multiple users with multiple desktops on a computer. With SmallHD’s page feature, each user can set which overlays they want, save it, and recall their settings just by moving the joystick to the left until their page of settings is selected. This is a great feature for those who work with multiple shooters and need to quickly have the overlay tools they need available with the click of a button.

There’s a lot to love about SmallHD’s new 502 monitor. It has 441 pixels per inch, a solid build quality, and most important, every kind of helpful overlay that a cinematographer could ask for. At $1,499 for both the monitor and the Sidefinder, the SmallHD 502 should be on the short list for any cinematographer that uses DSLRs, mirrorless cameras, shoulder rigs or hand-held gimbals.

Dan Bruns is an Emmy award winning cinematographer and editor. He currently works at a university where he teaches a new generation of cinematographers and editors how to produce documentary films.