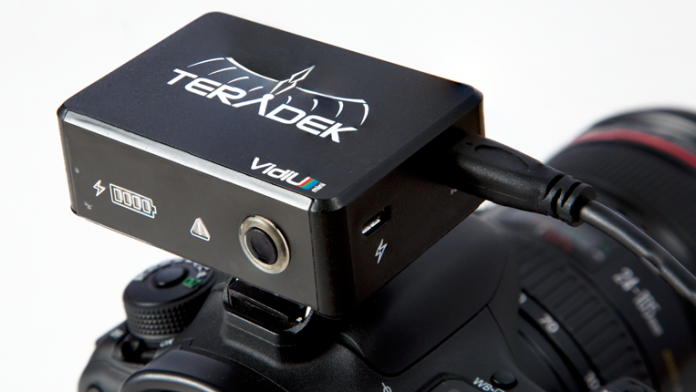 The VidiU Mini is a compact, portable streaming device that streams full HD 4Mb/s live footage to any online video platform via Wi-Fi or 3G/4G service. The device itself is barely bigger than a tin of Altoids, measuring at 2.9 inches x 2 inches x 1 inch and weighing just about as much at about 4 oz. The VidiU Mini is a solution for anyone looking to stream to the web without the hinderance of cables or cords. Connection to an iOS or Android device can also provide portability beyond Wi-Fi restriction.

The included shoe attachments enable the VidiU to attach to just about anything with a hot shoe or available bolt, and Teradek also sells a custom case specifically designed to attach itself to GoPros. The shoe attachments are included and extremely versatile. The GoPro case however has one purpose and costs a whopping one hundred fifty dollars.

If you’re in the business of streaming live video and only take one piece of advice from this article, it should be to look into Teradek’s streaming app Live:Air. Live:Air is a free video editor, switcher and streaming app featuring loads of handy functions like chroma key and pre-installed transitions accessible with the touch of a finger. The best feature of Live:Air is the ability to accept up to 4 camera feeds from multiple sources like Teredek devices, iPhones and iPads, turning your iDevice into a mobile control room for streaming directly to the web.

The new VidiU Mini trades in several features from its larger predecessors, the original VidiU and the VidiU PRO, but features enhanced portability, convenience and longevity. The VidiU Mini also costs two hundred dollars less than the next tier Teradek device. The Mini doesn’t have an LCD screen, ethernet port or joystick for adjustments, and steaming capability has dropped from 5.2 Mb/s to 4Mb/s, but the Mini fits in the palm of your hand and connects to all of your iOS and Android devices via either Bluetooth or Wi-Fi. The Mini has an HDMI Mini port, but there is no auxiliary microphone port.

The VidiU Mini has Bluetooth and Wi-Fi connectivity, but both proved to be finicky when attempting setup with the iOS app. The VidiU Mini struggled to connect via Bluetooth, and once connected, it quickly dropped. It also occasionally dead-ended in submenus, forcing a restart of the app. Fortunately, once set up, the VidiU doesn’t need a constant connection to the iOS app. After we got the VidiU connected to Ustream, we abandoned the app for the physical start/stop button, which worked reliably.

While a hardline internet connection is usually prefered, the VidiU Mini foregoes this option in favor of portability.

In our first test, the VidiU struggled to establish and maintain a reliable Wi-Fi connection before and during streaming. In a second test, using a known-reliable connection, the VidiU maintained a constant connection to Ustream without issue. While a hardline internet connection is usually prefered, the VidiU Mini foregoes this option in favor of portability. The VidiU Mini does emit its own Wi-Fi signal in AP mode, which is meant to contribute data bandwidth to the streaming network.

Based on our observations, video streaming from the VidiU mini seems to be all or nothing; that is, when network quality drops, the video itself drops out entirely rather than lower the resolution. This is a problem across all streaming devices however, so to combat this, Teradek has built-in a Suggested Quality button to match ideal resolution with network connectivity. Due to the unpredictable nature of wireless networks and mobile data providers, we suspect that in most cases, the network the VidiU is connected to will be the weak link that comprimises streams and it is reccomended that you test the speed of you connection using a tool that measures average upload speeds, rather than the more commonly measured burst upload speeds.

It’s possible to extend streaming times indefinitely by connecting the VidiU Mini to a USB power source, like an external battery pack, wall charger or computer.

With a strong connection, the Teradek’s VidiU Mini works like a charm. It’s advertised to stream over 3G/4G LTE, but if that’s your intent, just remember that you may be unable to stream using the VidiU Mini’s best quality settings. Mobile networks can be unpredictable which will make for an equally unreliable stream. Only if you’re confident of your network’s speed and ability to maintain a connection should you consider the VidiU Mini, and if so, we expect your confidence in the VidiU Mini to be equally high.

Sky Scholfield has been producing videos for ten years for clients including National Public Radio, The Smithsonian and NGOs throughout Northern California. He now lives and works in Chico, CA for North State Public Radio.