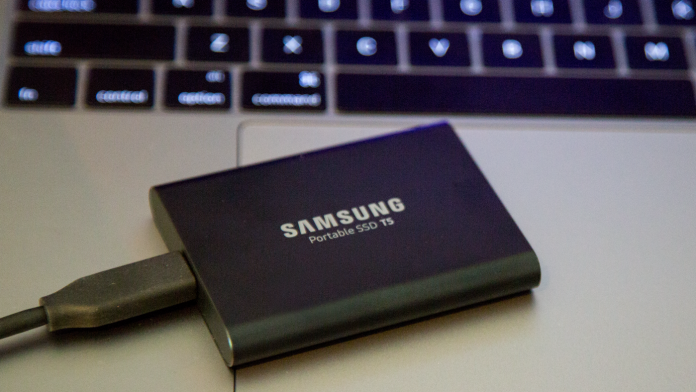 If you’re in search of small, lightweight, fast and durable portable storage, the Samsung T5 is a great choice — if you don’t mind paying a bit more per gigabyte (GB). Available from 250 gigabytes (GB) to two terabytes (TB) and ranging from 130 dollars to 800 dollars, Samsung says the T5 has a data transfer rate of up to 540 megabytes per second (MB/s), but we didn’t see numbers quite that large. The T5 is a USB Type-C device but includes an additional USB Type-A cable.

The T5 is Samsung’s third portable SSD in this model line. Released in 2015, the original T1 is still in use at Videomaker. In 2016 with the T3, Samsung changed the look and the USB type, and also increased capacity and added password protection with AES 256-bit hardware encryption. The T3 offers up to 450 MB/s read/write speeds and USB 3.1 Gen 1 connector with a combination plastic and metal case. We have a T3 in the office as well, and we use it often.


Regardless of what type of system you have, PC or Mac, you are able to reformat for exclusive or universal access.

Over the last few years, whenever we research removable drives, we’ve seen lots of complaints about formatting. Here is a small refresher if you need help formatting a drive for your system. Regardless of what type of system you have, PC or Mac, you are able to reformat for exclusive or universal access. Each type of formatting has its unique parameters. There are four types of formatting to be aware of: FAT32, exFAT, NTFS and HFS+. The oldest and least compatible is FAT32 — it also has a file size limit of 4GB. exFAT is the formating system that followed FAT32. exFAT is compatible with both PC and Mac. Next is NTFS. Accessing an NTFS formatted drive on a Mac won’t allow for any changing of data; you can only copy data from it. A PC, however, can both read from and write to a NTFS formatted drive. The last format system is HFS+, also known as Mac OS Extended or HFS Extended. This is the primary file system of MacOS. Like with NTFS drives on a Mac, HFS+ drive can only be read using Windows machine.

The T5 is about the same physical size as the T3, but the new model offers a new aluminum enclosure and a new paint job. Samsung says it can handle drops of up to two meters. When it comes to the included cables, they could be short depending on your application. See how far yours needs to reach to make sure you have a long enough cable. When we used the T5 a Mac Pro on our desktop, the cable was long enough. With the MacBook Pro Touchbar the cable was the perfect length — we wouldn’t want them to be any longer for this application. If you need long cables, budget accordingly.

Being able to edit from a portable drive can be handy. But if you need to edit high resolution or high bit-rate video, how fast you are able to read and write should be of interest. Using AJA System Test Lite, we tested the T5 to see how accurate the data transfer rates are in Samsung’s specifications. Samsung says to expect up to 540 MB/s read and 515 MB/s write speeds, but our test showed a different result — though not too far off. When connected to a 2017 MacBook Pro 15-inch via the USB-C to C cable, we saw an average of 515 MB/S read and 487 MB/S write speeds. The write numbers are off by 28 MB/s, whereas the read speed has a 25 MB/s discrepancy. To validate that, we ran the test five times when formatted in HFS+ and five times in exFAT format. The results were conclusive. When connected to a system with only type A connections using the Type-C to A cable, we saw an average of 370 MB/S write and 364 MB/S read speeds.

To determine whether you would be able to work from this drive, you’ll need to know the bit-rate of your video. Make sure you are comparing bits to bits, not bytes to bits, as they are different. If the data rate of your video is less than what the drive can handle, then you’re good to go. If not, it’s likely you will suffer frame loss during playback. If you are writing directly to it from a camera, beware. Like a slow SD card, you will lose frames on your recording.

When it comes to data storage, there is a solution for every workflow. In this case, we’re going to look at the marketplace for a small and portable SSDs. From the most affordable to most expensive, we’re going to look at the WD My Passport SSD, the G-Technology G-DRIVE R-Series USB 3.1 Type-C Mobile SSD, the SanDisk Extreme 900 Portable SSD and LaCie Rugged Thunderbolt External SSD with USB Type-C Port.

Lastly, the LaCie Rugged Thunderbolt External SSD with USB Type-C Port comes in two sizes: 500 GB for 330 dollars and 1TB for 570 dollars. It has an integrated Thunderbolt cable and a USB 3.0 Type-C port. It’s drop-resistant up to 6.6 feet and has a water resistance rating of IP54. It also has AES 256-bit software encryption.

The Samsung T5 is small, lightweight, fast and durable, and it’s in the middle of the marketplace for dollar per GB. It’s a good choice for those who need to move 500GB to 2TB often and have limited physical space to transport data. If you need a minimum data rate of 370 MB/S read/write and up to 487 MB/S write, 515 MB/S read for Type-C you should consider the Samsung T5 SSD.

The Samsung T5 is an SSD thats small and can store up to 2TB. It’s a bit pricey per GB, but shows good read and write performance.

Chris Monlux just watched the first six Star Wars movies over a weekend in order  to get ready for the newest movie, The Last Jedi. He is also Videomaker’s Multimedia Editor.