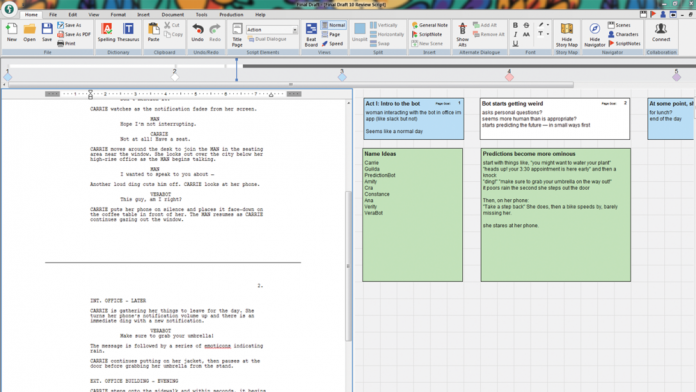 Final Draft has long been considered industry-leading screenwriting software, but its high price tag has lead many burgeoning screenwriters to wonder if its usefulness is truly worth the cost.

Final Draft 10 is compatible with Mac OS X 10.9 or later and Windows 7 or later. Installing the software to our computer running Windows 7 was smooth and easy. The whole process was complete by the time we returned from a brief web browser break, and Final Draft was ready for us to start using immediately.

Most will be familiar with Final Draft’s script formatting tools, which are designed to make it easier for screenwriters to develop stories while still adhering to strict formatting guidelines. This is particularly important for screenwriters shopping their scripts to agencies and studios, since an improperly formatted script is more likely to be rejected.


In addition to formatting, Final Draft also offers robust organizational tools, script breakdowns and production reports to help with pre-production tasks beyond the actual writing of the script.

In addition to formatting, Final Draft also offers robust organizational tools, script breakdowns and production reports to help with pre-production tasks beyond the actual writing of the script.

When you open up Final Draft 10, you’re greeted with the main program window with a toolbar at the top and two sub-windows: the main story editor where you’ll add your text and the Navigator window where you can jump between scenes, find and add script notes and keep track of characters. There are plenty of options for customizing the workspace as needed.

The Story Map bar at the top of your page is set to a 120-page target by default, but since we wanted to write a script for a five minute short film, we adjusted that target down to five pages. We kept our document in the default screenplay template, but there are dozens of templates available, including ones for graphic novels, manuscripts and query letters in addition to a selection of scripts for film, stage and TV. Final Draft 10 even includes studio-specific templates if you know you need to follow a particular studio’s standard.

We opened Final Draft with a kernel of an idea for our screenplay, but it definitely needed development, so we navigated to the Beat Board, a brand new feature in Final Draft 10. The Beat Board is designed to be a flexible brainstorming space where you can create moveable cards to store notes about the different story elements.

The Beat Board view starts as a blank grid. Like in the default page view, the Story Map bar lines the top of the screen to give you an overview of your script. We liked being able to freely move and resize cards, and the color coding option made it easy to quickly find the information we needed to continue writing. The Split view option was also nice for referencing the Beat Board while writing the script.

Like in previous versions, Final Draft 10 uses predictive Smart Type to anticipate which element you’ll need next. If you type an E at the top of the page, Final Draft knows this is likely to be a scene heading using the standard EXT. abbreviation that tells us the scene will take place outside. Final Draft will also put the line in all caps — the script formatting standard for scene headings.

You can cycle through all possible script elements using tab — a handy shortcut — or select the appropriate element from the  menu in the toolbar ribbon at the top of the screen. For the most part, writing and formatting can be done almost exclusively with the keyboard, greatly speeding up the writing process compared to a standard word processor.

Also new to version 10 is the Alternate Dialogue tool. This allows you to save different versions of dialogue and cycle between them as you choose your favorite. This is great for experimenting and trying out different modes of expression for different characters.

The Alternate Dialogue tool would also be useful when combined with Final Draft’s new collaboration capabilities, when a collaborator might want to try a different wording without overwriting someone else’s work. We didn’t have a chance to evaluate the collaboration capabilities, but the new feature is designed to let multiple writers work on the same script simultaneously without having to constantly save and share new versions.

There are also a few more minor improvements to the usability of certain functions. For instance, you can now add filenames to headers and footers automatically and choose between new scene numbering options. The upgrade includes improved revision menu options along with other updates to make the interface feel more contemporary.

What else is out there?

There are a number of other dedicated screenwriting programs, including Fade In at $50, Highland at $30 and Scrivener at $45. All of these are significantly less expensive than Final Draft and offer many of the same formatting and organizational tools, but Fade In offers the feature set most comparable to Final Draft’s.

If you just need basic script formatting, Celtx is a great option. It’s free and will make your script look professional, but if you need more planning tools, you’ll have to upgrade to one of the paid plans, which run at $9 or $17 per user per month depending on the options you need.

If you don’t already use Final Draft or you just don’t need those extra features, there are cheaper options that are worth a look, most notably Celtx for basic screenwriting or those just starting out, or Fade In if you need more tools and options. There’s no denying the Final Draft feature set is incredibly robust, but unless you have a specific need for those tools, we recommend looking elsewhere for scriptwriting software.

If you’re already using a previous version of Final Draft, the version 10 update adds some great new features. The Beat Board, Story Map and Structure Points are useful, flexible planning tools and definitely help maintain the structure of your script as you are writing. The new collaboration capabilities would be especially useful for writing teams and production houses. If you’re a professional screenwriter, Final Draft 10 could be a worthwhile investment.

Final Draft 10 offers a wealth of useful tools for professional writers. The new Beat Board, Story Map and Collaboration tools make this a valuable upgrade to previous versions. If you’re serious about screenwriting and want to use industry-leading software, we recommend Final Draft 10.

Nicole enjoys many genres but finds science fiction to be both the most challenging to write and the most engaging to read.