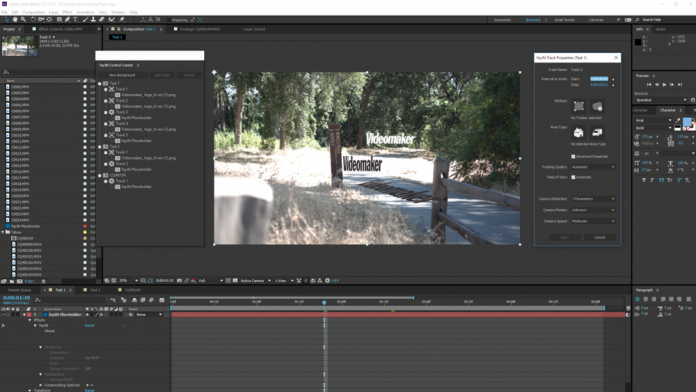 With FayIn, Fayteq set out to make a simpler, easier-to-use and better motion tracker. Version 2.3 offers a plug-in integrated within Adobe After Effects CC — no outside software to open and import data into — streamlining the process even further.

Other trackers often require you to import or export tracking data and work outside of the program, but FayIn 2.3 has complete Adobe After Effects CC integration. That means that you don't need to leave After Effects; FayIn can be added just like an effect. You can continue to use After Effects CC as you normally would, even adding effects to your inserted object. Along with the After Effects integration comes the ability to use Dynamic Link to Premiere Pro CC, so you that you can change the text without having to go back to After Effects.

Other trackers often require you to import or export tracking data and work outside of the program, but FayIn 2.3 has complete Adobe After Effects CC integration.


After you set up a track, a tracking report is available, which gives tracking results for things like depth, X, Y and Z axis orientation. Moverover, the report will also tell you how the tracking process went: “ok” if everything went well, “not relevant” if there no need to be concerned about an issue or “please check” if something needs your attention.

To track objects in a frame, FayIn will generate a 3D world for inserting and repositioning of 2D objects. This gives you automatic perspective adjustment along the x, y and z axis. All of these options can be simplified using the beginner mode. While in beginner mode, FayIN will instruct you on everything you need to do to get an accurate track. Once you become familiar with how FayIN works, you can enter expert mode to gain advanced controls over the functions and tools used for tracking and inserting an object.

We used FayIn with two different types of moving shots to test the plug-in’s ability to track and insert objects. The first test used a slow slider shot with a mix of bright highlights and dark shadows caused by the surrounding trees. Pulling away from a fence post moving right, there are several layers of foreground, calling for different tracking speeds depending on where the track sits in the frame. The background doesn't move much, but the fence post in the front of the shot goes from being fully in the shot, to fully out of the frame in five short seconds.

We started using the beginner mode. It’s really simple. Two choices and you’re off to the races. You first pick the area select tool you want, labeled method. Choose Rectangle and you can draw a four point shape to select your area or use the Region Tracker, which essentially allows you to paint in the area you want to track.

The second choice is the area type. Choose from either a static or dynamic area. For a moving shot, choose dynamic, and for a stationary shot, choose static. Press start and the tracker will start reading your shot. After a few minutes, you are ready to choose what you will insert. Some tracks take longer, and depending on the horsepower of the computer you're using, your tracking time might vary.

Because our shot was from a motorized slider it wasn't a difficult track. We did it in beginner mode on multiple locations already looked great. Going into the advanced settings wasn't necessary at all. We did find that the inserted object — a PSD of the Videomaker logo in black — blended into the scene, but we were able to use the fill effect to change its color to white and the effect worked like normal.

Next up we challenged FayIn with a handheld shot — b-roll for our review of the RED RAVEN. Shot from the Canon 1DX Mark II, the handheld shot rocked back and forth, and the subject of the shot was moving as well. We decided to try first using the advanced settings in Beginner mode. five options now become available when using advanced settings.

You’ll need to first choose the tracking quality — automatic, low, moderate, high and very high — then choose the field of view. This is where you can put in the degrees of shots field of view or just leave on automatic.

Now on to choosing the camera distortion and camera motion. You’ll have selections like unknown, pre-rotational and complex. Lastly, you’ll need to pick the camera’s movement speed: slow, moderate or fast. We picked the options that best fit the shot, pressed start and waited for it the track to process.

If more tools are needed, enter advanced mode and get the tracking overview to help with an aspect of your selection or track set up. It will tell you if you are having issues with your track and what part might need some help with finer adjustments. When in advanced mode, we discovered the track to longer to work because of the added parameters. However, if you choose to use the advanced mode you should expect it to require more work. On harder tracks, it took longer to fine tune the track, but we were able to get results we were happy with.

Is it worth it?

After Effects does have a built-in motion tracker, so you can use that and keep your money in your wallet. However, we found that FayIn was easier to use and had a better track on simple shots. When it came to complex ones, FayIn was just far more intuitive to use. Both trackers can achieve the same results, but you the process is simplified with FayIn.

Along with the built-in motion tracker, After Effects CC also comes with mocha AE CC. The big difference between this and FayIn is the direct integration into After Effects CC. Mocha AE CC is a separate program that works in tandem with After Effects. Again, the benefit of FayIn is clearly ease of use.

We aren’t completely convinced that FayIn is all that necessary. In the future, Fayteq will offer a new product called FayOut, which will work with FayIn to remove elements completely from a scene. Once that is available, justifying paying for a program that’s already free with in After Effects might make sense. However, as of now, it’s a bit excessive. We wouldn't recommend it, unless you just want an easier solution and are willing to pay for it.

FayIn is a motion tracking plug-in that works with in After Effects CC as an effect. It does a great job tracking, but is costly when you compare it to the already available tracker included in After Effects CC. We wouldn't recommend it unless you are searching for an easier solution.

Plug in for Adobe After Effects CC

Chris Monlux loves post-production work and listening to music, but every time he tries to mix the two, he can only get through one song. He’s also Videomaker’s Multimedia Editor.