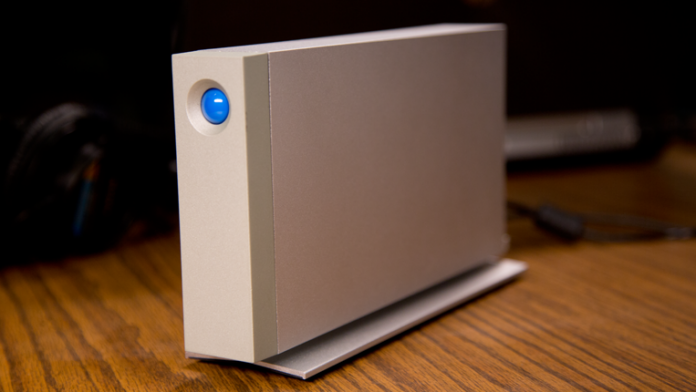 When working with a lot of large project files, storage is a constant — and expensive — issue. The LaCie d2 Thunderbolt 2 is a storage device built with media professionals in mind. Not only does it feature a Thunderbolt 2 interface, it is also includes USB 3.0. Since Thunderbolt is an I/O that supports high-resolution displays and high-performance data transfers, you have available transfer speeds of 20 Gb/s through Thunderbolt compared to 5 Gb/s with USB 3.0. If that wasn’t enough, there is also an available SSD upgrade which adds another 128GB of storage with the additional goal of increasing throughput.

The aluminum enclosure stands in a vertical position, creating a smaller footprint and reducing vibration and noise. The space saving design lends itself to being incorporated into existing professional work environments. You also have the option to stand the d2 horizontally or have it installed in a 19" rack with LaCie’s available mounting kit. The meat inside the new d2 is a Seagate 7200 RPM professional hard disk, which is cited in the documentation to tout up to 220MB/s in sequential transfer rates. That makes it a good choice for anyone needing to store and access large files while the up to 6TB capacity makes it a good choice for archiving projects. Also included is a backup software suite which is compatible with both Time Machine and Windows Backup.

This is a standard plug and play device — no software to install or keys to lose. As soon as we connected the USB cable to the computer, the room lit up with a calming blue light, and so the testing began.

We began editing some HD AVI and MOV video files off the LaCie and it worked out fantastically. We were able to scrub through a fairly large video file at a bitrate of around 150 Mbps in Adobe Premiere CC without any lagging or buffering.

In order to install the SSD upgrade, users need to remove the rear panel and insert the PCIe card into the slot. This turned out to be trickier than it sounds. The rear panel is the only thing holding the hard drive in the enclosure, so be careful when removing the rear panel. As soon as we finished putting the screws into the SSD upgrade, we noticed that the drive now had no USB access, only Thunderbolt.

Adding the SSD upgrade doesn't add a separate SSD drive visible in the operating system. There may be misunderstanding about how this works. Don’t anticipate having a separate and faster drive that they can cherry pick data to store there; this is not the case. Instead, the SSD upgrade turns the device into a SSD-HD hybrid which uses clever firmware to decided which data is "hot” — accessed frequently — in order to keep a copy of said hot data on the SSD for rapid access. As a result, hybrid SSHD drives typically will not see a benefit in speed when used as portable storage. However, these drives truly shine when used as a working drive — booting the operating system, loading and running applications or repeatedly accessing the same files.

For video production, the drive itself is great as large storage space and relatively fast access times given it’s a mechanical drive. However, the SSD upgrade will likely only improve performance for a limited number of users: those that are running an OS or installed applications directly from the drive — not common or practical — and, much more common, video producers who will store and frequently access the same video files for edits into a final production directly from the d2. For this, the SSD upgrade may be worth it.

This setup makes benchmarking rather difficult, so these numbers reflect a "worst-case scenario" without really showcasing the performance of caching hot data on the SSD. It can be said that reads of hot data will be over twice as fast as reads from the hard disk itself. For maximum accuracy, all benchmarks were performed from a RAMdisk — a portion of the system RAM used as a storage drive.

As the benchmark tests demonstrate, the SSD upgrade will offer little benefit to anyone using the d2 strictly as a storage device. While editing frequently accessed files, speeds will reach speeds up to and over 1,000 MB/s which is more than sufficient for handling several simultaneous, high-bitrate video streams. While we couldn’t benchmark that specifically, we did experience the snappiness in our real-world tests.

So what's the bottom line here? Is this really a product that's doing anything new? There are a good number of external hard drives available that are great at storing data. However, simply storing data isn't the strength of the d2 with the SSD upgrade, it's how fast it delivers that data. That's where the LaCie d2 Thunderbolt 2 with the SSD upgrade makes it's mark. Video editors using low-bitrate files may not notice the increased performance, but those working with taxing files will find real value.

Dustin Franks is a visual effects artist and the promotions coordinator for KHSL/KNVN in Chico, CA.