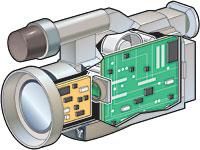 Ladies and gentlemen, step right up! Inside this tent you’ll have a remarkable opportunity to get closer than ever before to digital video, otherwise known as DV. I’ll give each of you an unusual close-up look at the mechanics of DV, at the various DV formats on the market and at the reasons DV can do so much, so well. So follow me into the tent of wonders!


Look – the journey is already beginning. We’re now shrinking, small enough to penetrate the inner workings of a DV camcorder. Let’s enter through the lens housing and start looking around.

As we move through the zoom lens, note that at this point, digital video is a lot like analog video. Light and sound enter the camera through a lens and microphone and then a computer transforms the real world into electronic signals.


Digital and analog part ways fairly soon, however. The tiny silicon charge-coupled device (CCD) at the end of the lens barrel uses hundreds of thousands of pixels to make DV look incredibly sharp and clean, with around 500 lines of potential resolution (or more, in three-chip pro cameras).

From Analog to Digital

Next we come to the circuit boards, which do an enormous amount of the work of making your DV footage look and sound fantastic. The software coding and computer components contained in the boards produce a digital replica of each moment of video and audio in the analog-to-digital conversion process. There is also circuitry that works in reverse, for playback on your television. It’s the "digital" part of DV that puts this technology head and shoulders above consumer analog video formats. Digital video is pure data, not analog signals, allowing pristine and endlessly repeatable transmission of high-resolution data through an all-digital pathway.