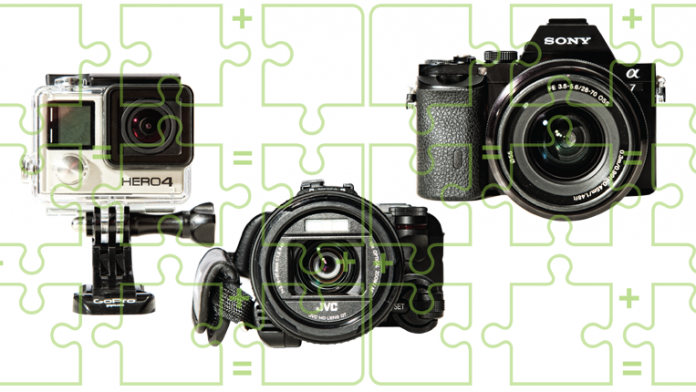 It’s event day. The keynote speaker is the honchiest of head honchos, the A/V team has fed clean audio to one of the three cameras capturing said honcho, shots are framed, beads of sweat form…fingers tremble… it’s showtime.

Few things match the reward of good event video production. The preparation that goes into each one of them to ensure that when the moment comes and cameras need to roll is immense. Pro event teams plan meticulously, design a look and feel for an event and choose equipment or contractors accordingly.

Cut to a studio shoot.

Large monitors display the feeds from the handful of DSLRs on set. The talent is in position. The lights are set. The camera bodies and lenses are all the same make and model.

What needs to be done before hitting record?

Of course, each scenario is different. Differences in venues, budgets, goals and even subject matter can influence the size of a video team, the equipment that arrives on shoot day and the personnel manning each camera.

When everything is said and done, and it’s time to capture a multi-camera video, or when working in a live-switched environment and pumping the video feed out to giant screens or a management team overseas, those cameras had better match up.

Whether we know it or not, properly matched capture from each of our cameras is not only the right thing to do, it is a professional expectation. When camera teams are hired to cover an event or shoot a corporate video and three cameras are to be used, there is an unspoken understanding that the footage from each device will match.

Even if the client doesn’t yet realize it’s a consideration, it’s already a requirement.

There are effective ways in post-production to match footage between cameras, but the focus here is to ensure that what is captured between more than one camera is as close to matching as possible.

Before hitting buttons, holding things up in front of the camera, and playing with settings, it’s important to identify the qualities of a moving image that need to be considered to create a match.

Primarily, they are exposure, shutter speed, noise and/or grain and white balance. Some cameras make adjusting these settings simple. Others hide the settings away in deep, dark menus.

Either way, it’s important to know the gear, and adjust it properly to push the images being captured as close to one another as possible.

How to set up equipment for matching

Matching cameras starts before heading to the set or event. Choosing equipment for a multi-cam shoot can be as much about matching camera images as it is for capturing a specific look or feel.

That said, this first point might seem like a no-brainer, but ideally the cameras are the same make and model. This isn’t always possible, but two Canon 5D Mark III DSLRs with matching settings are going to put the images in the same ballpark right off the bat, particularly if using the same lenses. The second best is using cameras of the same make, different model, but with the same or a similar sensor, like the Sony EX-3 and EX-1. Plenty of other camera manufacturers have lines of cameras with similar or matching sensors throughout the lineup. For interchangeable lens cameras, matching the lenses will certainly help too.

If they’re the same camera, with identical settings, they should match, right? They’ll be closer than totally mismatched cameras, but not necessarily. Many camera models are manufactured over a number of years, from different facilities with differing conditions, and subtle updates over time.

Whether we know it or not, properly matched capture from each of our cameras is not only the right thing to do, it is a professional expectation.

If it’s impossible to bring matching equipment, choosing all of the camera settings prior to the shoot and then monitoring and adjusting prior to shooting will make the difference.

The best bet is to try to make enough time to test and work with the cameras prior to a shoot starting to at least get them close. Usually the larger the budget, the more setup and testing time there will be, but even with no lead time, a basic knowledge of how to set up cameras is important.

Choose the frame size and rate that the project is to be delivered in and set each of the cameras to exactly those settings.

Next, ensure the shutter speed, also refered to as shutter angle, of each of the cameras is set the same. Shutter speed has a huge impact on the appearance of finished footage. Action sequences can benefit from overly quick shutter speeds, but a good starting place is generally around double the framerate of the camera.

Therefore, if you’re shooting at 24p, set the shutter to 48, at least as a starting point. There may be a need to speed it up or slow it down slightly, but this is a good launch point.

The term “shutter angle” is a reference to older rotary shutters, where a disc would angle to let light in. The larger the angle, the slower the shutter speed. Although modern cameras don’t use rotary shutters, the term has hung on as a simple and known way for those who make video to describe the appearance of motion blur. If the desired effect is a subject or subjects that are blurred for a greater percentage of their frame-to-frame displacement, then a larger shutter angle is the choice, and the opposite also applies.

So, why double the frame rate when choosing a shutter speed?

The rule of thumb for doubling the frame rate with the shutter speed comes from the same school of thinking as shooting in 24p. Achieving a cinematic look involves a number of elements, and the most common shutter angle setting for cinema is around 180 degrees, which equates to a shutter speed near 1/48 of a second at 24 frames per second. A larger angle, and the blur extends too close to the blur in the previous and next frames, causing a smearing effect. A smaller angle leads to a more stuttered appearance resulting from the blur gap.

Other factors, such as subject movement, will play a part in choosing shutter speed and angle, but start out there and adjust to suit the scene, just make sure to use the same setting across all of your cameras.

Cameras are highly capable pieces of equipment but require some assistance in understanding how to interpret a scene. For instance, show a human being a white piece of paper, and they can tell that it’s white whether it’s in a dimly lit room or out in the bright sun. While a camera can compensate for either scenario, it needs some help to do so.

Each camera is different, but there should be tools for white balance on board. Most have a number of presets, and the more professional models will allow for custom white balancing, where a white card is held in front of the camera and set as the white that is recognized by the camera.

The key is to set the cameras to a similar setting to ensure that they’re close. If they all offer custom white balancing, that is obviously the best option.

Often, there will be a few options using numbers in Kelvin units. Those numbers refer to color temperature, which can be adjusted to accommodate certain scenes in much the same way a consumer camera will offer white balance presets to handle different environments.

In very basic terms, color temperature describes the apparent warmth or coolness of light. Simply, the lower the color temperature, the warmer the image. Roughly speaking, 2500-3500K represents the reddish, orange-y hues given off by tungsten bulbs, 3000-4000K is the oranges and yellows of sunrise, 5000-6500K moves away from the yellows into the blues of clear daylight, 6500-8000K is like the blues and greys of overcast daylight and 8000-10000K is like the darker blue-grey of shaded daylight. If a shot is too blue and needs warming up, the color temperature is likely too high.

There’s a lot more to color temperature and tint, but a basic understanding of color temperature will help decide on a video’s look and feel before starting to match up cameras. It also helps troubleshoot differences in looks.

ISO is an in-camera exposure setting, along with aperture and shutter speed. While some high-end cameras that shoot RAW footage can have exposure tweaked a bit in post production, setting ISO properly in-camera is essential.

Raising a camera’s ISO basically makes dimmer portions of a shot lighter. As that ISO number increases, the camera is amplifying and filtering the signal before the clip is recorded, meaning whatever the effect of the ISO setting is gets baked into the captured footage. Therefore, it’s important to be thoughtful when adjusting ISO. Adjusting it too high can increase noise and reduce dynamic range in a shot. Neither of these things are good for post-production.

Adjusting the camera’s ISO to be as low as possible while delivering a nice, balanced image is key. Start with each camera set to the same ISO level and adjust. Many cameras have a default ISO, but the environment, lens characteristics, sensor characteristics or other factors can determine whether the level needs adjusting to more closely match other cameras.

These basics are key, but there is a very important lesson about shooting on a set or at an event that supercedes all others: When there are multiple operators, they must communicate effectively. If everyone stands at their camera and says “I’m at 1080 30 – everyone else at 1080 30?” the chance of missing a setting are slim.

Create a procedure or ritual for the beginning of each shoots. Once the cameras are set up and operators are at their stations, call out each critical setting and have each operator call back his or her camera’s setting. Make sure it all matches, then check each unit to determine how close they appear.

It’s going to be very difficult to get cameras exactly identical from simply adjusting settings and comparing monitors, but these basics will help get the process started. It’s all about getting them as close as possible to minimize the work that will need doing in post-production.

Matching a DLSR to a camcorder can be tricky, but with the right settings, itâs possible to get them reasonably close. The camcorder cannot achieve the same shallow depth of field as the DSLR, so weâll use it for the master image, shown at the top. In the middle, we see an image from the DSLR set at f/4.0 and ISO 100. Here, the trees in the background are much too soft. To match the deep depth of field and noise of the camcorder, use a smaller aperture and higher ISO, such as we see in the bottom image, whi[/caption]