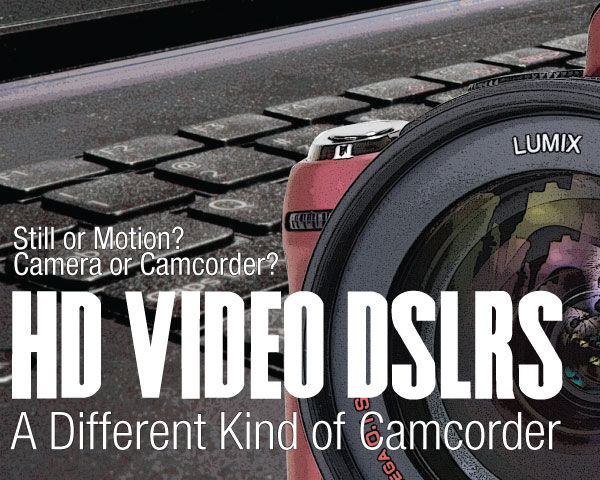 Sometimes called a video or HD DSLR, this idea was originally conceived as a way to help photojournalists expand their repertoire and has grown quickly to become attractive to videographers as well.

With a video DSLR, you can carry one camera for shooting both photos and video, and shoot video unobtrusively and in difficult environments. The big bonus, however, is the glass – the ability to use the extensive collection of photographic lenses available for DSLR cameras, giving you amazing flexibility in controlling focal length and depth of field. Combined with high ISO ranges from image sensors much larger than typical camcorders, the result is great flexibility in shooting in low-light situations.

However, these cameras are still primarily designed for still photography, and not for studio or event use, so they don’t have features like built-in stereo microphones, and they typically shoot only short clips, around five to ten minutes. In addition, the video modes do not provide the full capabilities of the traditional photographic modes, with limited manual control and/or limited auto focus or exposure options.

But over the past year, companies including Canon, Panasonic and Nikon have responded to growing interest in video DSLRs by introducing a range of products, from enthusiast models around $900 to more rugged workhorse models around $2,000 for pros like journalists and wedding photographers to high-end models around $5,000. 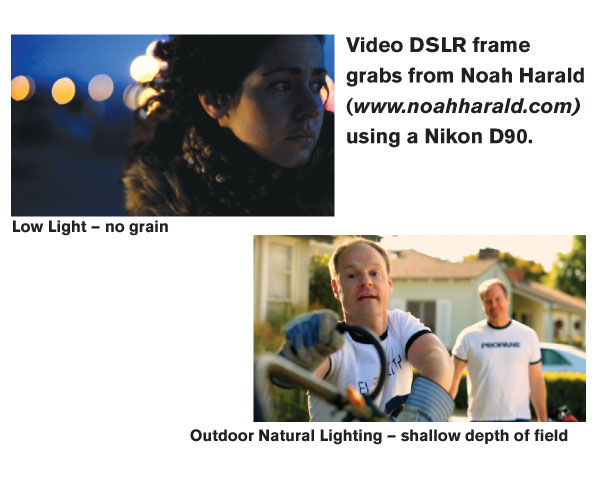 For example, Nikon popularized the video DSLR concept with the D90, introduced in mid-2008, a 12.3-megapixel camera with a D-Movie video mode, which is now available for $900. Nikon then added the D5000 at $680, with a flip-out LCD. The D300S at $1,700 adds more pro features, including an external microphone jack, support for both SD card and more rugged CF card storage media, and an enhanced 51-point autofocus system with contrast-detect AF during movie recording. 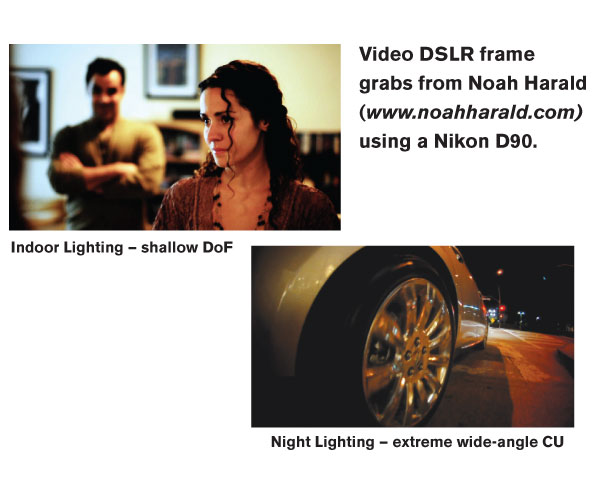 The D3S also steps up to a full-frame FX format sensor, roughly the size of a 35mm film frame, with higher sensitivity and lower noise. The smaller DX sensor used in the other cameras allows them to be smaller and lighter, but introduces a 1.5x crop factor (i.e., a 24mm lens on a DX sensor camera will actually result in an approximate 36mm view).

These cameras shoot video in Live View mode, in which the mirror flips out of the way so you can monitor the scene directly on the LCD display on the back of the camera. 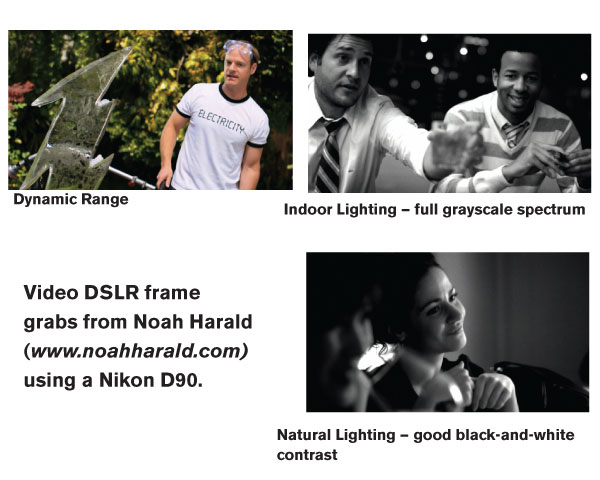 However, these cameras have short recording times, limited by the size of movie file on the storage card. For example, the Nikon cameras store up to 2GB per clip or approximately 5 minutes of 720p video or 20 minutes at standard definition. The Canon cameras record video up to 4GB per clip, or 12 minutes of Full HD video, 18 minutes of 720p HD or 24 minutes of SD.

The benefits to photographers who want to add video to their repertoire are clear, says Steven Heiner, senior technical manager at Nikon: “It’s within the comfort zone for still photographers… The technology changes, but within the same tool, lenses and creative sensibilities. They can shoot short clips, with same compositional confidence, the same intent, in low light, with a long lens. Stills come to life; you can bring your talent to the capabilities of the camera, instead of vice versa.” 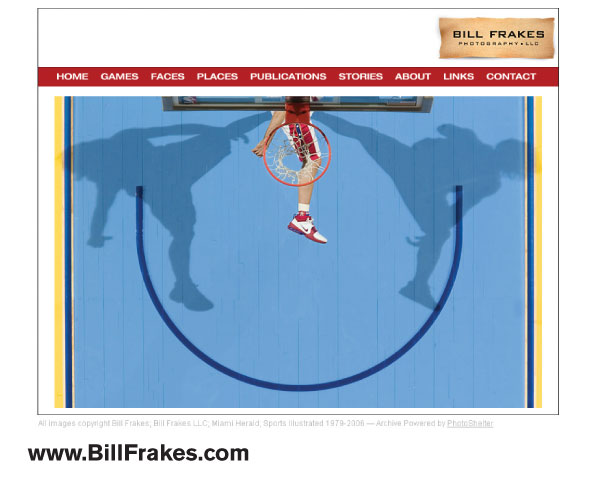 Agrees Bill Frakes, Sports Illustrated staff photographer: “Two things principally motivated me to start working with a DSLR camera instead of a strictly video camera. First, the incredible optics. Second, the comfort of working with the same basic equipment configurations I have used for my entire career. These cameras allow me to consolidate my gear list, so I can take a wider array of lenses and accessories.”

Frakes has worked with the Nikon D90, D300s and D3s. See his websites for his photography and multimedia productions combining stills, video and audio. 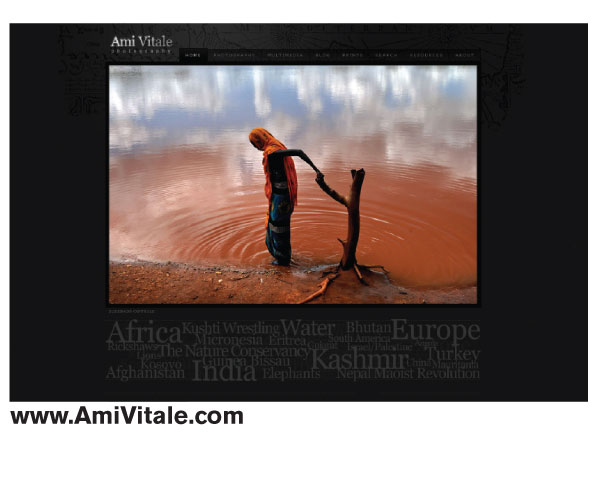 Video also provides a new revenue opportunity, says photographer Ami Vitale: “Content is in demand, and I had to make the change to survive. It’s also practical because I shoot print formats as well as video, and having it in one body really simplifies things.”

Vitale travels widely for magazines including National Geographic, Newsweek, Time and Smithsonian. See her website for an example of video she has shot with the Nikon 300s. 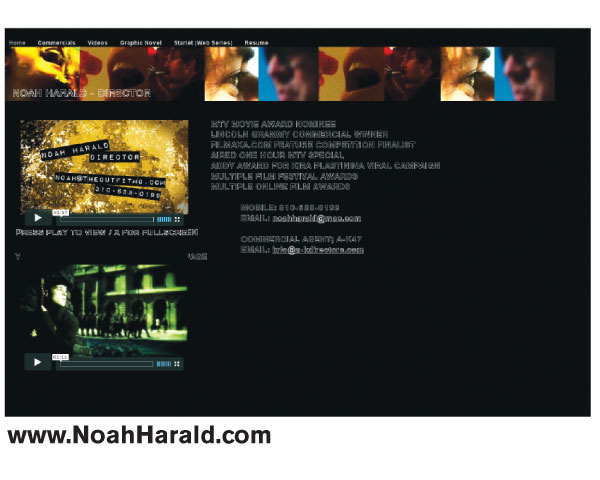 Noah Harald is an independent filmmaker and videographer who has made the transition to shooting with DSLRs. See his website for examples of his films and commercials. Harald’s introduction to the Nikon D90 came for a commercial for Lincoln. “I was excited about using Nikon lenses for a film shoot,” he says. “We shot the night life of L.A., cars, bars and restaurants, and were not weighed down with a big crew. It worked perfect and I fell in love. There’s a depth of field, sharpness and clarity of prime lenses.”

“It was great how little light was needed,” says Harald. “In the interiors, the more we turned off the lighting, the more real it looked. The contrast looks beautiful; there’s a quality to the dark areas, with more dynamic range. Camcorders provide around 4 to 5 stops, film provides 11 and this is in the middle. There’s more detail in the black; it’s richer.”

“They look more cinematic,” he says. “There’s a quality to the video that’s more film-like. Video can be incredibly sharp – too sharp – or the noise will give it away as video noise, with color in the noise. This is more like film grain.”

Shooting video with a DSLR consolidates equipment and provides more flexibility for production, especially because you’re not so obviously shooting video.

“I travel to remote places,” says Vitale, “and the weight and amount of gear that I carry is always an issue. I was excited by the possibility of being able to switch so quickly and easily between formats without having to carry a completely different setup. I need for people to feel comfortable and relaxed, and this format was a lot less intimidating than a much bigger traditional video camera.”

However, even with the smaller camera, says Harald, “People don’t question the professionalism of the crew.” And in a more traditional filmmaking setup, “It works well on rig and is something of a conversation piece.” In addition, the small size allows for more run-and-gun use. “You can shoot with just the camera,” he says, “while a more visible camcorder causes problems in a night club or a restaurant. It’s a great advantage for guerilla filmmakers.”

But there’s still an adjustment, whether your background is photos or video. For Vitale, “Video, as a medium, is quite Zen-like. It forces still photographers to plan more, to be more patient and to think about the story in a tangential way. The principles are the same, but you need to wait longer, hold shots and get a variety of angles and perspectives to make it flow.”

Shooting with a DSLR is “more like film,” says Harald. He recommends using a rig when possible, saying “it helps to stabilize the camera since it uses a rolling shutter.”

Similarly, Harald recommends capturing sound separately – the cameras are not as quiet as camcorders, and, while the high-end models have an audio input, the others record only mono sound. This is a good idea even if you just plan to shoot photos, since you can use the ambient sound to create multimedia presentations with animated stills, as shown on Frakes’ StrawHatVisuals.com site.

Even with all this excitement, video DSLR cameras are still in the early phases of development. There are obvious areas of improvement, some of which are already appearing in the newer, higher-end models, from longer recording times to more complete photo-like control when you are shooting video.

Harald concludes, “It’s a different format, not for long weddings or sports. But it would be hard to go back to a video camera with a fixed lens. I’ve converted a couple of friends and expect that DSLR for video will be pretty common in a few years.”