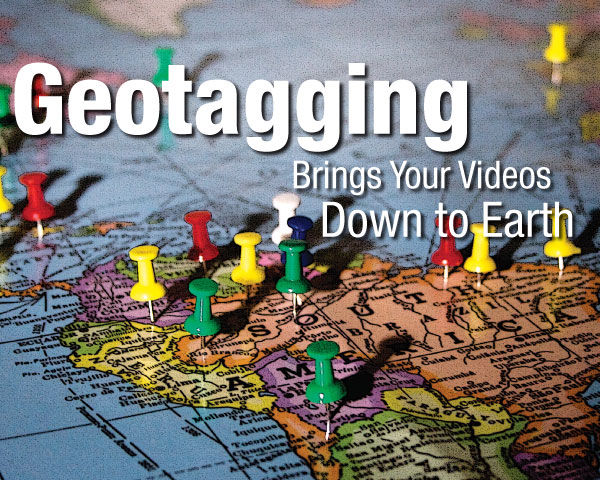 Geotagging your video footage is one of those applications that begs creativity. Not so much in the creation of the actual video (although that’s always a good thing), but rather in what you can think up to do with it.

Embedding “geospatial” information – that is, place and time data – into video footage isn’t technically difficult. It can be managed fairly easily during the post-production upload to the web with a few simple tags or, with a GPS-enabled camcorder or device, during the actual recording process itself. The real possibility of this technology lies in what you can do with it.

For starters, geotagging video makes the most sense when incorporated with a map. Latitude and longitude coordinates are the technical aspects of the tag, along with addresses, place names and any other location data. These are accurate as far as they go, but the essence of geotagging is context. A good map goes a long way toward making geotagged video much more relevant. 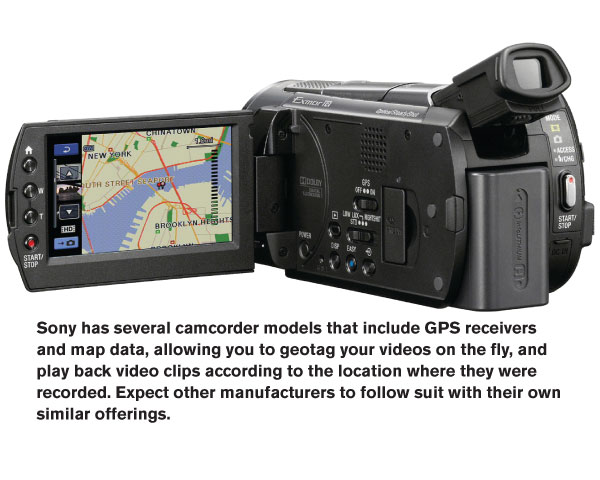 Here’s the general idea: Embed your video with a geotag and then mark that place on an interactive map, usually online (such as Google Earth), but sometimes within the camcorder itself (like on the touch-screen display of the various Sony GPS-enabled camcorders). Now, when you or someone else goes to that map, you can see the video geotags that relate the video with the place, usually in the form of the ubiquitous map-marking thumbtack or some other obvious icon. Click on the tag and the video plays.

It’s also important to have a name or some other indication of the video subject matter included in the tag as well. It doesn’t do much good to sort by place unless there’s corresponding video topics to choose from once you get there.

Another good use of a video geotag is to “reverse search” from the video content itself to identify where the video was shot. You might be surprised where video comes from.

can also be useful in the video production process. With a GPS-enabled camcorder, shot logging becomes a snap. An embedded tag that includes information about where and when the footage was shot, accurate to NASA satellite specifications, can be an extremely valuable post-production tool.

In short, geotagging “facilitates the sorting, finding and sharing of media based on the location where it was captured,” according to Geotate, one of the original video geotagging technology enabling companies. 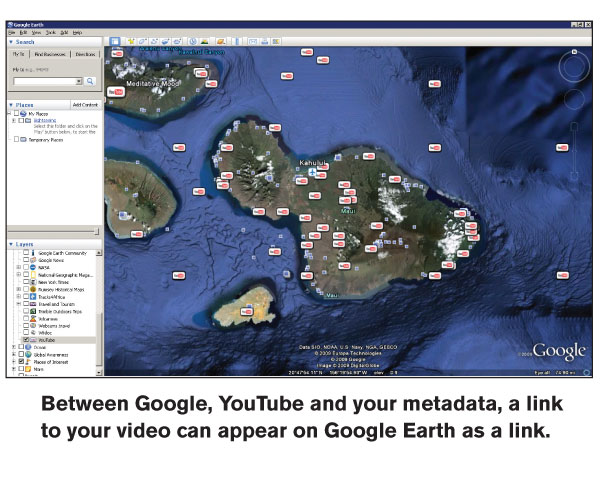 A good map is an important part of a geotag’s usefulness, which makes perfect sense considering the tag relates the video to a map location or coordinate. 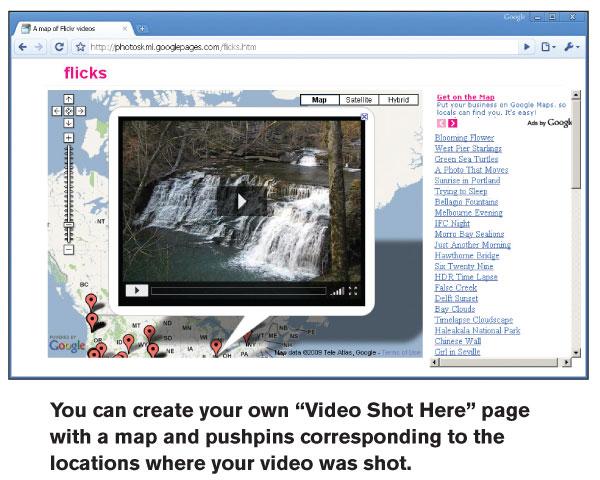 No application does a better (or bigger) job bringing a map into the real world – or vice versa – than Google Earth. Once Google finished designing the interface to allow easy online search and navigation of various views of our world, it purchased YouTube and promptly incorporated video geotags into its platform.

Download the latest version of Google Earth and enable the YouTube layer in the Galleries menu, and you can see the thousands of geotagged videos on YouTube that are affiliated with a particular place on Earth (or Mars, or the Moon, for that matter).

Depending on the context, this can be either incredibly useful or incredibly meaningless.

For example, travel video, documentary video, or video with some other geographic theme or relevance, is ideally suited for geotags. Whether it’s giraffes in Tanzania, triathletes in Hawaii, karaoke bars in Tokyo, or slums in New Delhi, a geotag can add richness and meaning to your video content if the content is tagged to a relevant place.

If, however, all the videos you shoot are tagged with your hometown because, well, you live there, then the geotag is less impactful on the meaning of the content.

Also, because you manually tag the videos with location data once it is uploaded, the Google Earth-tagged video tends to lack the precision available with a GPS-enabled camcorder.

On a GPS-enabled camcorder – such as Sony models HDR-TG5V, HDR-XR520V or HDR-XR200V – the map comes embedded in the camcorder, and the data is not yet formatted to be compatible with Google Earth or other open-source interactive maps. This necessitates you use it somewhat differently.

On these Sony models, the maps are by Navteq, which also provides GPS-enabled maps for Garmin, BMW and Nokia. Video footage shot on these camcorders will be automatically embedded with a very precise GPS geotag. A map pulled up on the camcorder touchscreen will indicate locations where footage is tagged, and by selecting the tag icon, the video from that location will play back.

A bonus is you can use the camcorder as an actual interactive GPS to find out exactly where you are.

There is a growing movement to create a standard format for video geotags, which would make all geotags compatible, and allow for the ability upload the Sony geotagged files and have them automatically read by Google Earth, for example. Until this happens, geotagging applications are developing along separate but parallel paths.

A Short History of the Geotag

Geotagging is not a brand-new concept. It began in the still photo realm as a natural extension of shooting and uploading photos with GPS-enabled cell phones. You can even add geotags to a website to help with its search engine optimization. Flickr, the photo-sharing website from Yahoo, will actually import the geotags from the photo files and catalogue your photo gallery according to the geotags (one of the benefits of having a standard format for the tags).

Just as video followed still images onto the web, geotagging has been slower to be adapted to the video realm, but it is increasing in functionality and popularity.

Flickr, the Yahoo photo sharing site, began to allow users to upload short (90-second) and small (150 MB) video uploads to its site, complete with geotags, in 2008. Flickr describes these videos as “long photos.” Just as you upload your photos to share, this application allows the upload of a video postcard of sorts. A short “place video” that includes some native sounds and some narration, for example, is a potentially much richer experience than a still photo.

Another use for geotagged video is within the context of a blog or website. If you are adding video to increase relevance or interest in a blog, then adding a geotag to the video is just one more layer of depth that adds context and meaning.

If context is the essence of geotagging, then nothing needs it more than the blogosphere. Finding relevance among the multitude of blog entries you might find on any topic becomes exponentially easier if you can search within the context of place, as well as date, time and tag topics.

This is the evolution of contextualized search on the web, and geotagging plays an important role, especially with the proliferation of massive amounts of online video content.

Geotagging makes video much more easily cataloged and searched. It still takes a little extra effort in most cases to manually geotag video files, and until a standard format is determined, GPS-enabled camcorders can geotag within their own context, but not out on the web. Once geotagging becomes a standard practice, and this is probably a simple matter of time, all video will benefit from being more meaningful and easier to find.