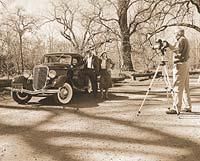 You stare morosely at your edit screen as Dexter Dimbulb says into the phone, "I’ll see you in…. (A long pause while he gropes for his line) …Detroit, tomorrow." That endless dead spot has to go but how?

The answer is that all-purpose editing Band-Aid: The cutaway shot. Holes in the footage? Cut to the birds. Mismatched action? Cut to the clouds. Lousy performance? Cut to well, cut away to a cutaway shot, edit out the problem, and then cut back to the primary action.

Deployed with finesse, cutaways can fix a multitude of goofs; but shooting them takes planning and inserting them takes skill. We’re here to show you both. Well catalogue the different kinds of cutaways, review the glitches they can fix, explain how good directors shoot them, and share some tips for splicing them invisibly.


"Cutaway" is the generic term for any shot that punctuates the main action; but the word also labels one of three specific shot types: