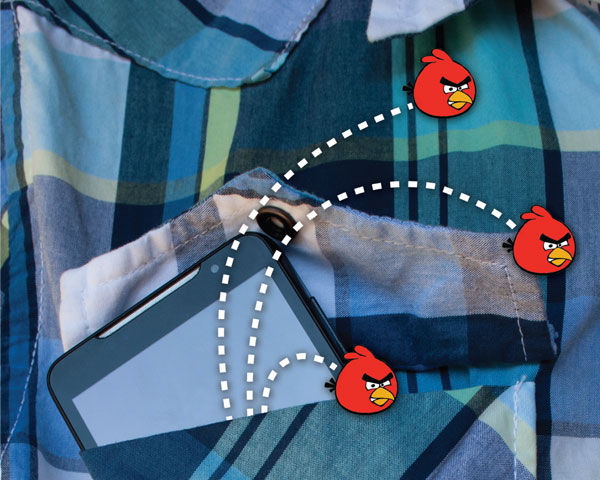 A runaway train speeds uncontrollably through a snowy, barren mountain pass, halted only by a devastating explosion. Its violent shockwave hurls the train from the track, careening over a cliff, and tumbling into the chasm below. A few feet away, the Director yells, “Cut!” Then, she huddles with the DP around a smartphone, their camera of choice, and checks the shot.

Ok. Next summer’s blockbusters may not be filmed on smartphones – yet – but that scenario isn’t nearly as implausible as it once sounded. In just the past two years, smartphone cinematography evolved from novelty to art form. Experimental shorts shot entirely with cameraphones gave way to award-winning titles and a new category of video production. 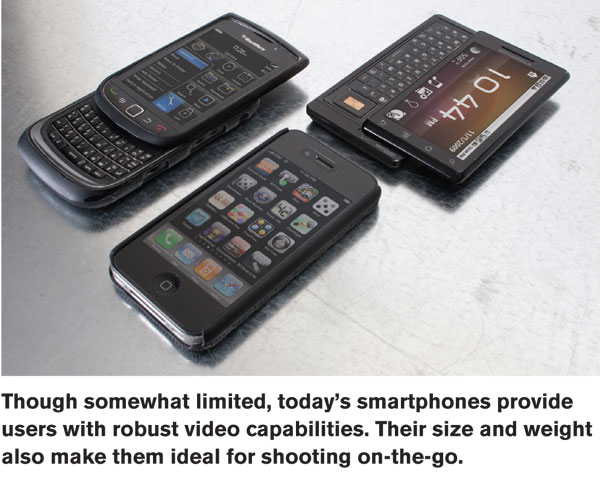 To paraphrase an old adage, the best camera is the one you have with you. That makes the smartphone a winner by default. With an iPhone, Droid, BlackBerry, or similar device, the ability to shoot always lies within arm’s reach. And for many future video producers, their phone will be the camera they learn on.

Sure, tradeoffs remain. The tiny sensor and modest lens, not to mention the limited or nonexistent optical zoom, demand realistic expectations. But for every tradeoff, there’s also an advantage. Smartphones are small, light, ubiquitous enablers of spontaneity and experimentation. And if a shoot runs over, you can even use it to call the spouse.

Shake It Up (Actually… Don’t) 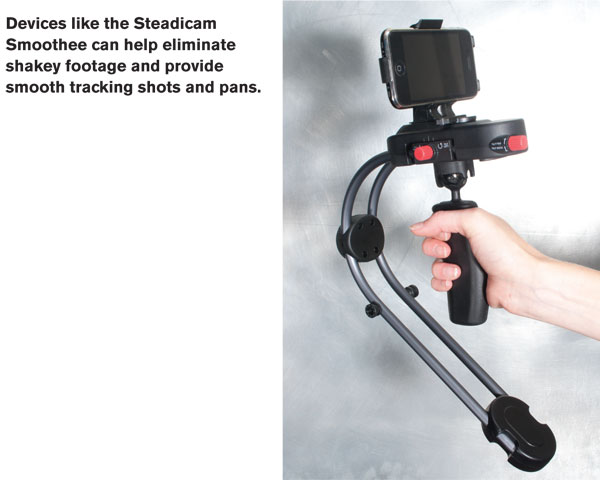 A cameraphone’s diminutive frame makes it highly susceptible to movement; in the same way ocean waves rock a rowboat more than a cruise ship. Anything but the most basic handheld shots risk sending your project into Blair Witch territory. That doesn’t mean this year’s family Christmas video needs to look like you filmed during an earthquake.

First, lock the phone down. No, not with a tiny tripod; with a real tripod, the same one you consider indispensable on any other shoot. A simple device like Gary Fong’s Tripod Adapter ($20, street) enables you to attach a phone to a tripod just as you would any other camera. In a pinch, resting your camera on a steady surface improves stability. Something as simple as a wine glass, turned upside down with your hand resting on the base, may save an otherwise shaky situation.

If you insist on cinematic camera moves, consider a unit like the Steadicam Smoothee ($180, street). The device takes a time-honored Hollywood camera balancing system and shrinks it down to mobile size. The Smoothee promises to absorb shakes, leaving behind only silky tracking shots and perfect pans. The same kind of shots would be inconceivable to pull off if you went entirely handheld.

The same tiny form factor that exaggerates movement can also work in your favor. Try stashing a smartphone in out-of-the-way places to capture unique angles. For example, affix a phone to the end of a broom pole and hover it over a crowd scene, or hang it outside a moving car to capture heart-racing motion.

As you move down the camera pecking order, the ability to handle a wide range of contrast gradually decreases. In other words, smaller cameras generally struggle with scenes containing both bright light and inky darkness. Composing shots thoughtfully to minimize that contrast will help hide your camera’s humble origins (assuming you even care to hide it).

Many phones allow basic exposure adjustment. If you expose for a dark mountain range, expect the sky to render as a solid white mass. If you expose for the sky’s billowy white clouds, expect your mountain range to come out like a dark, featureless splotch. Likewise, small sensors limit a camera’s ability to handle low light. Plan your scenes accordingly. That great shot you envision of the detective apprehending some creep under the faint streetlamp may not translate on a cameraphone. Instead, have your detective confront the perp in his car, where the cabin light might emit just enough glow to achieve the intended effect.

Glasses For Your Phone

Most smartphones have a fixed, relatively wide-angle lens. That means it captures every image at the same focal length, resulting in a ‘sameness’ from shot to shot. Changing it up normally requires employing digital zoom (in other words, blowing up the image), which then degrades picture quality. But now, manufacturers are creating supplemental lenses for the phone, a sure sign they’re beginning to take the smartphone videography market seriously. Instead of replacing a phone’s optics, these supplemental lenses attach to the body of the device, covering the built-in lens. Photojojo offers a telephoto lens for the iPhone with 8x magnification ($35, street). Dobi Design sells a range of lenses for the Droid, ranging from a fisheye to a 2x telephoto. There are also apps available for both to simulate the effect of a fish-eye lens without the lens itself.

Can You Hear Me Now?

Some of the first videos that made a splash for being shot entirely with smartphones were music videos. For good reason. Smartphones haven’t experienced the same renaissance with audio capture as they have with video. Music videos require only nice visuals, with the audio laid in almost exclusively in post. That doesn’t mean you can’t get great audio when shooting with a smartphone, it just requires a workaround.

If you’re shooting a professional or semi-pro production, take the money you’re saving on a camera rental and apply it towards a dedicated field recorder. High quality audio paired with the HD output from your phone can combine for an exceptionally high-quality end product. However, even the most incredible moviemaking wizardry paired with subpar audio will fail to dazzle.

If dedicated audio gear falls outside your budget, and you’re left using the camera’s built-in microphone, do everything you can to create the ideal sound recording environment. Stay away from windows and air conditioners, and shoot in a room far from the street to prevent traffic noise. If your shot allows for it, keep your subject relatively close to the phone. Lastly, don’t let your fingers cover the phone’s tiny mic! One errant finger can muffle your audio beyond repair.

Smartphone productions present the perfect opportunity to venture outside your comfort zone and explore techniques you don’t ordinarily use. Much of this can be done entirely with apps, some of which mimic traditional filmmaking techniques to surprising effect.

One example is the TiltShift Video app ($1.99, iTunes App Store), which treats your video with a filter that makes everything look miniature. Gimmicky, yes, but for a few bucks you can pull off what used to require an expensive, dedicated tilt-shift lens. Trying different video apps may inspire new ideas and lead you to shoot something in a way you never previously conceived.

Go Against The Grain

Many phones enable you to edit video right on the device. Or, you can import your phone footage into the non-linear editor of your choice, just like any other video. If you have this option, take advantage of it. Even the basic color correction tools built into most non-linear editors can work wonders and lend style to your source video. Rather than fight to smooth over imperfections, try embracing them – maybe even accentuating them with a bold color styling. Traditionalists can opt for a simple vignette filter, which never fails to draw the viewer’s eye into the frame.

Smartphone cameras are highly capable, always-available tools that are beginning to earn the respect of filmmakers for good reason. Sure, stunning images come easier to dedicated cameras, with their better innards and high quality optics. But more than that goes into a great production. If you’re shooting on a phone, focus on getting all the other stuff right. Good lighting. Good composition. And, of course, good storytelling. If you have that last one, even the smallest camera can make a video worthy of the biggest screen. And, of course, don’t forget to turn off your ringer.