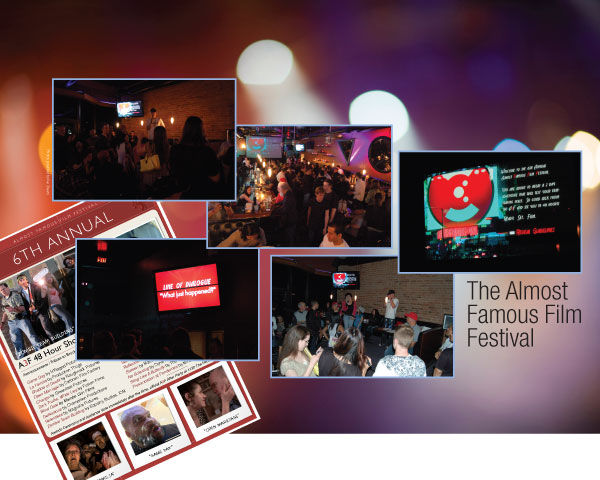 February 12th is a wild night at Majerle’s Sports Bar and Grill in downtown Phoenix. More than 200 people are packed into the 9 Lounge at the grill, and the noise is deafening. The laughter overpowers even the stereo system. As 7:00 p.m. approaches, people begin to pay more attention to the young man in the ballcap next to the video screen at the back of the room. Although it looks like a party for the Superbowl or the NBA playoffs, this is the kickoff for the 6th Annual Almost Famous Film Festival’s 48 Hour Short Film Challenge, and the man in the back is the A3F’s founder, Jae Staats. Tonight, he’s the guy with all the answers, and at precisely 7:00 p.m., he will initiate one of the Southwest’s largest and most entertaining film festivals.

The concept is deceptively simple: each team has exactly 48 hours to make a film. But every team must incorporate specific elements – a theme, a prop and a line of dialogue – that they will not learn until tonight’s kick-off (the criteria are also simultaneously posted to the A3F website for non-local teams). Once they have these three elements, teams have the next two days to write, cast, film, edit and render their one- to five-minute film and return it to Staats by the 7:00 p.m. deadline on Sunday.

At Majerle’s, the criteria are announced amid screaming and cheering. This year’s theme is “a white lie”, the prop is a mirror or some other reflective surface that a character must use and the line of dialogue is “What just happened?” The teams scatter. The room clears within minutes.

In five years, the A3F has become the largest independent short film challenge in the country. In 2005, 28 teams participated. This year 75 teams signed up. By Sunday evening, 56 teams will have turned in completed movies.

Jae Staats is a lean, quiet man with a rare, quick smile and a tendency to worry. He’s clearly dedicated to creating the best quality product that he can – the client list for his own videography business, Ballboy Productions, includes the Susan G. Komen foundation, Nestle and the Phoenix Suns. But more than that, Staats cares about and wants to support independent filmmakers, which is why he and his brother Kai started the A3F as a separate entity. He explains, “I thought the area needed a film festival that allowed filmmakers to come together and better their craft in a way that focused the attention back on them and not on some corporation like many festivals do.” 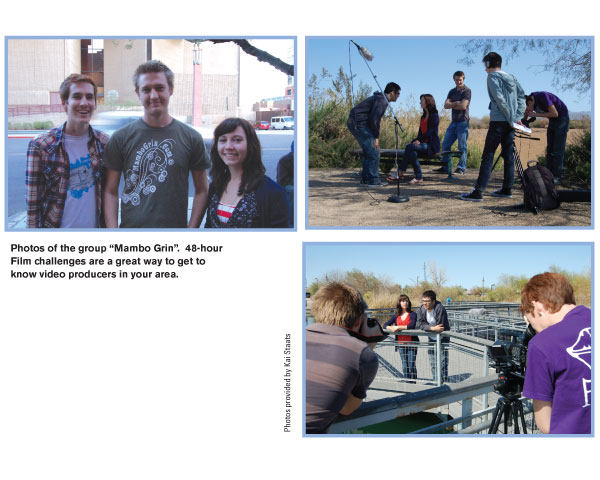 Some of the teams have been working together for years; sometimes members just met a few days before the challenge. Justin Humbert, from Mambo Grin Films, has been working with his crew about five years, and they have competed in several challenges together. Sometimes, teams come from a little closer to home. Daniel Holiday, from On Holiday Productions, says his team was his whole family. “I worked with my brothers and my wife and their kids. We used a lot of kids, which was incredibly difficult!’ he laughs. Brian Skiba and Laurie Love from Victory Angel Films met through the A3F three years ago and they have been professional and life partners since. According to Skiba, their nine-member team (Black List Film Empire in this challenge) is a “filmmaking community that supports our success as a group and as individuals, but for the A3F we compete as one.” 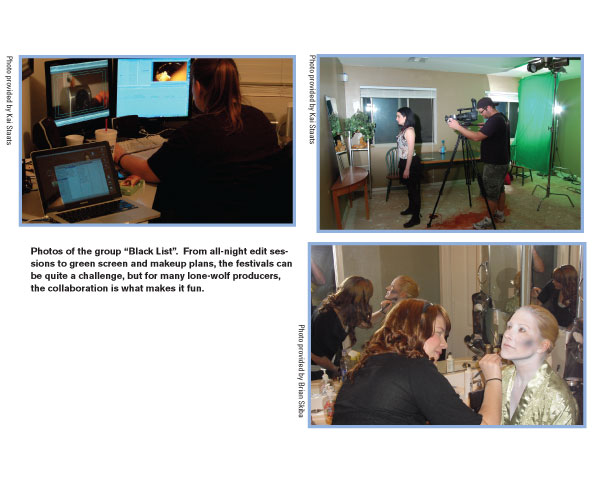 Scripts range from spare to dialogue-driven. Some of the teams come with a script already fleshed out and hope the theme will work; others wait till they learn the theme and then start writing. Ten/One Films’ Sterling Smith was pleased with his essentially predetermined script. “We just had to make a few adjustments.” Their script was done an hour after the announcement. Mambo Grin’s Humbert says they didn’t have their final idea until 2:00 in the morning on Saturday and wrote the script until 5:00 a.m. Flexibility seems to be key. Several teams said that they came to the filming with one idea, only to find that it wouldn’t work, and they had to change in midstride.

In 2007, Rock Soup entered the first Spanish-language film at the A3F. The theme was heroism, and the team produced a heartbreaking story of a Mexican migrant reluctantly carrying a young woman to safety after his best friend dies in the desert. The film won best drama, proving that an English-language script is not a necessary component of this competition.

With a large urban area and abundant open space nearby, Phoenix offers a lot of location possibilities, but finding places that work is not always easy. When Smith first entered the competition in 2007, he says he went in blindly. “We were trying to find locations during our 48 hours with ample lighting -it was a nightmare.” Now, he says, they plan their locations beforehand. Mambo Grin needed a location appropriate for a blind date, so they are doing part of their filming at a wildlife preserve. Unfortunately, they picked a busy area, so they have to stop filming every time people walk by, which eats up precious time.

This can go smoothly or it can really dig into your time. At the preserve, Mambo Grin Films is a little disorganized. A long discussion ensues about camera angles, what will work best, who’s sitting where, what should happen first. Actress Daniela Mitchell isn’t getting much direction, but she’s taking it in stride. “We get kind of sidetracked sometimes,” she laughs. “But it’s going along.” Up in Flagstaff, Ten/One Films began filming at 9:30 Friday night. They returned in the morning and were done by noon. “We even had time for some sleep,” says Smith. Really? They laugh. “A little.” Sleep is usually a rare commodity in the A3F.

Most teams spend the wee hours of the morning editing, color correcting, adding graphics and sound, and rendering out their work. Skiba’s least favorite time in the festival is “Sunday morning around 3:00 a.m. to 7:00 a.m. The film is in the can, all the excitement of the production has died down and most everyone – all right, everyone – but me is asleep, and I haven’t slept since Thursday night.” Staats says some teams will be rendering their films in their car on a laptop as they drive to the drop-off on Sunday evening. Some teams never finish. 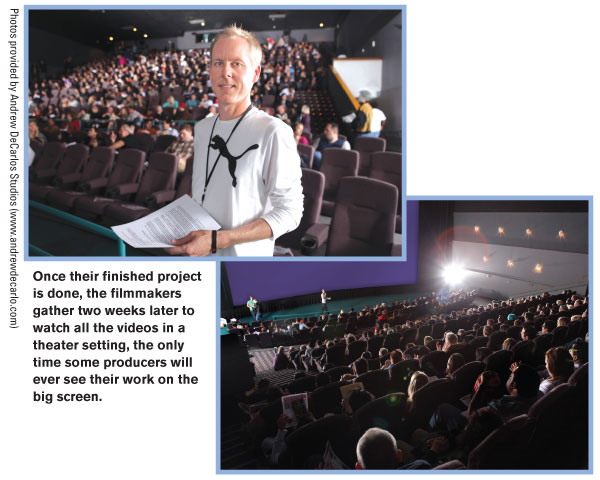 Almost two weeks after the films were turned in for judging by a panel of experts, the A3F holds a public screening for the Top 20 films. Awards range from MyStudio gift cards, gear and clothing to iPods and cash. But the biggest draw for most of the filmmakers is the chance to see and share their work on a big screen.

The original A3F screening was held in an old art house in downtown Phoenix. The next year, Staats moved his growing festival to a 447-seat theater in the AMC Arizona Center complex. They sell out every year, and this year is no different. People begin arriving well before the show. Filmmakers bring their cast, crew, families and friends. There is a tangible buzz in the air. It’s like the Academy Awards, without the sequins.

We settle in to watch the films. Some of the films are technically complex and heavy on special effects. Others are simple story-driven productions. The audience receives all the films with cheering and applause. Neither On Holiday Productions nor Ten/One Films made it to the Top 20 this year, but Skiba’s graphic experimental arthouse film 5 Days won the award for best overall style and third place for drama. Best Comedy went to Squishy Films and ICM for their black comedy/horror short Zombie Team Building, and the Best Drama award went to Minus Mitchell Films for their 1800s Western revenge saga Prevarication at Ponderosa. The audience voted Mambo Grin’s lighthearted romantic comedy Blind Date as their favorite. 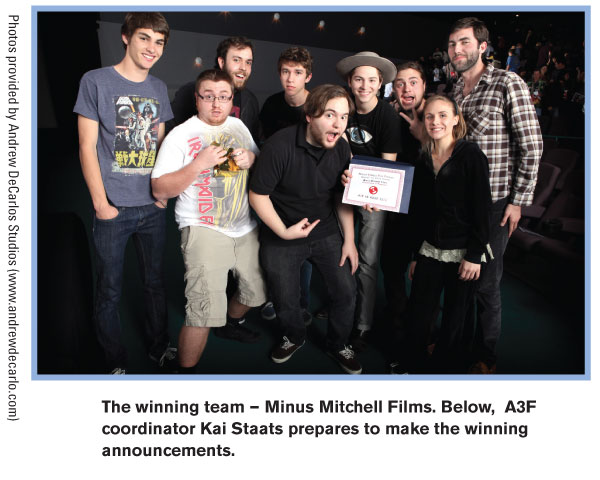 Why would filmmakers put themselves through the physical and emotional rigors of such a competition? “These 48-hour competitions are a great way to develop filmmaking skills,” Skiba says, “and then take those skills into the real world to find success.” His first short film after film school was for the A3F, and his career since has flourished. But even for people who don’t plan on a professional career in film, it’s pretty fun. Holiday looks tired but happy at the drop-off on Sunday. “It was very grueling, but it was a lot of fun.” So what was the most challenging aspect? If I expected to hear about lack of sleep or editing problems, I was disappointed. He laughs. “Working with children’s attention spans!”

The A3F has now been the driving force for the production of more than 500 short films. Staats likes that number. He’s proud to have helped grow the independent film community in the Southwest. “The A3F has always been about the filmmakers and the community that supports them, never about us or the people behind the scenes.” The participants appreciate that focus. Smith says that the A3F “isn’t snooty. The festival makes us feel like we’re big-time directors.” Skiba says that, as far as 48-hour competitions go, they enter only the A3F because of Staats’ work with presentation, judging and venue. Even Phoenix Mayor Phil Gordon applauds the creative work of the A3F, calling it part of Phoenix’s future. The A3F became a non-profit entity in 2008 and has grown big enough to need a de facto staff. Michele Meyer and Jason Francois are both on the board of directors, and also help Staats with marketing and managing the popular competition.

A testament to the strong community Staats has helped build with the A3F was a tribute to Brock H. Brown, a young Phoenix filmmaker who passed away just before the competition this year. His team, Matter of Chance, has been involved in the challenge since the beginning, and Staats created the ongoing Brock H. Brown Best Script Award to commemorate this member of the A3F family. The seminal award was given for the film Prevarication at Ponderosa.

During the challenge, I asked filmmakers what advice they would give to people wanting to enter a competition like this. One suggested that people work with someone who has some experience first before going out on their own. Another stressed that filmmakers make sure they have everything they need beforehand and that they know how to use their equipment. Everyone talked about teamwork, about making sure you are working with people who “just want to make films” and will sacrifice ego for the good of the product.

But Smith summed it up best when he said, “Be prepared for stress and difficulties. Don’t take things personally, and you will love every minute of it.”

You can find information about the film challenges presented by the A3F at www.thea3f.net. Learn more about film challenge projects.