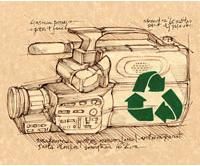 The presents have all been opened. Shredded wrapping paper lies like confetti across the living room floor. You’ve caught the entire day on tape for posterity. Your old video camera has earned its keep for another year.

“Aren’t you going to open that last present?”

You look through the viewfinder, confused, as a box is lifted into your field of view. And it’s not just any box; it’s The box for the camera you’ve been dreaming about the entire year, mumbling the phrase “Someday it will be mine. Oh, yes. It will be mine.” And there it is, right in front of you. “So,” your significant other asks, “What are you going to do with the old camera?”

Now that a new camera has entered your life, there are plenty of uses for that old camcorder.

Give it to the Kids

If you have a young one who has always loved watching you use the video camera and has even run it themselves, you’re set. Give the old camera to them in a “passing of the torch” moment and offer to help them when they need it.