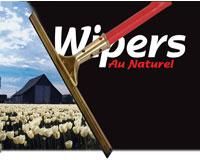 Our media-soaked culture has made cinematic shorthand a second language.

Although the average viewer may not be able to describe the technical difference between a dissolve and a jump-cut, he sure as heck knows what they look like — and more importantly, how they impact the story. Through exposure to thousands of hours of television and movies, every potential viewer of your video already has an advanced film vocabulary. How do you impress somebody as jaded as that?

Simple: You use the visual vocabulary as a tool to elicit the response you need from the scene. And there are few tools more effective and powerful than a little thing called a "natural wipe."

Generally wipes are post-production effects, and most often signify a transition from one scene to the next, usually suggesting a change in time or location. However, we're going to look at creating the wipes on location, using subjects or elements that move across the camera frame, commonly called "wipers." The two natural wipe types that we'll cover in this issue are:

You Make a Better Door than Window!

By far and away the most common use of wipes for scene transitions goes something like this: we see a young man — we'll call him Karl — standing in front of the General Store in the 1930s. Karl is young and full of life. As he watches the passersby, a young woman with a sun parasol moves into the scene from the left. As she passes in front of him, the parasol fills the frame. The screen goes dark for a split second… and then becomes a modern-day umbrella, carried by an older woman. Karl, once young and vigorous, is now an older man standing in front of an ordinary strip-mall.

The wipe provides an instant transition from one time period to another but it also achieves three different but very important results:

There's nothing that's technically difficult about setting up a wipe like this. In the example above, the setup consists of two different shots: the first is a shot tracking an actor that ends after a large object, like our parasol, has filled the screen and crossed the camera frame. The second is another shot that starts with the lens blocked by the modern umbrella, and then we see a different actor on a different street. In fact, the only really difficult part of the shot is just designing it in the first place.

In summary, the use of a wipe for scene transitions consists of blocking the camera's lens with an opaque object that naturally occurs in the space of the scene, and then matching that object with something similar in color, brightness, shape, size, or context in the following shot, in order to both link and cut between the two scenes.

Nothing Up My Sleeve

Just like a magician raises a curtain over his two lovely assistants before turning them into hungry Bengal tigers, natural wipes make special effects much more intriguing.

Consider the following scene: Super Heroine Uber-Gal is at work in her office. She carries a large soup can in her hand while she walks from one side of the office to another. Uber-Gal walks across the room and as the camera follows her, a bookcase briefly blocks the lens. The moment that the bookcase fills the frame, we hear a metal crunch. When Uber-Gal is seen passing on the other side of the bookcase, we now see she has the crushed tin can in her hand, apparently crunched by her super strength.

Cheap? Sure. Effective? Absolutely! By using an object to briefly block the lens — in this case an a bookcase, but it could have just as easily been a wall, or a business colleague walking in front of the lens — the director has the freedom to replace the tin can (or trash can, or ticking bomb, or angry marsupial) with anything that is called for in the scene. It's a simple — and more importantly cheap — way of achieving a special effect.

Though the natural wipe setup is technically identical to the scene transition described earlier, its results are very different:

Of course, this method only works if the object blocking the lens appears natural for the space of the scene. Additionally, the shorter length of time the wall blocks the lens in the transition, the more effective the technique. Fortunately, if you plan and shoot the scene correctly, editing the effect is quite easy.

In summary, by using a brief but natural-for-the-scene object to block the lens, wipes can be used to create simple but effective special effects for your project.

The first step in creating an effective wipe in a video project is identifying where one should occur. When storyboarding your script, the following kinds of moments lend themselves to wipes quite well:

Once the appropriate shot is identified, make sure to storyboard it accurately. If possible, import the storyboards into your favorite editing software and create a sample video of the wipe. If it works there, it should work in the final product. If not, go back and start over. Adding a very short dissolve between the two wiping elements often helps ease the transition.

Wipes are amazingly useful tools to any director. Though there are many ways to transition between one scene and another, few offer the amount of creative freedom as a well-planned use of a natural wipe. Add in its use as a cheap special effect technique, and this is one technique that no videographer should be without.

Tony Bruno has been making independent films for four years, is an occasionally actor, and makes his living as a professional technical writer.

Here are a few easy-to-create natural wipe ideas. The opening credits scene of the 2000 Mel Gibson –Helen Hunt movie, What Women Want, used some of these examples of natural wipes very effectively.