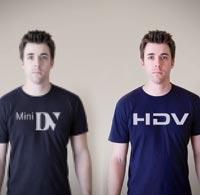 I was in my early teens in the late 1970s when the VHS/ Betamax wars were raging. My best friend Robbie took the plunge and bought a Betamax. Indecisive, I waited.

Early adopters run some risk, as anybody with a Commodore Amiga in their basement will probably tell you, but they also come away with some significant advantages. With more cameras on the market, and a host of editing programs to choose from, HDV isn't going anywhere in the near future. But the question is when to take that step; still largely missing from the HDV loop is a playback solution. While people wait for HD-DVD or Blu-ray to make some decisive victory, people hesitate over buying HDV cams or upgrading their computers. We'll take a look at some of the risks and some of the benefits of being the first person on your block to be shooting in HDV.

Let’s first take a look at several groups of people who may benefit from making the switch to HDV.

Are you the person on your block that had the first automatic garage door opener? The first VHS camcorder? The first microwave oven? If you enjoy the sheer uniqueness of new technology, you're probably don't need much of an excuse.

For a long time the Holy Grail of some DV users was to find a way to make their digital video look like film. Some video cameras offer a 24-frame progressive scan mode for easier transfer to film, but many people want that "film look" all the while realizing that their product will never be projected in a theater, but rather will debut "direct to video." For this constituency is Sony's CineFrame30 (CF30) which doubles one HD interlaced field and discards the second. This simulates a film look by effectively slowing the frame rate (in fact, it's very similar to the "slow shutter" mode on some SD cameras, but since it's HD, the quality is much more superior).

International Compatibility
Some HDV camcorders can shoot in NTSC as well as PAL.

People who produce wedding, corporate or documentary videos or stock footage may want to take advantage of the increased resolution and clarity of HDV as the industry moves over to this new format.

There are some considerations you need to make about HDV before you make the switch.

Apart from the obvious issue of clarity and contrast, all indicators point to HDV becoming a popular and well-supported standard in the months ahead. There are a large number of camera models, editing software and 16:9 televisions to choose from. The benefits of being able to offer HDV to your clients will depend on who they are and what they do.

There are some downsides to HDV as well — since it's lossy, highly compressed video, it degrades, if even ever so slightly, when you edit it. The bit rate is constant, so if you're shooting fast motion with lots of scene and color changes, there is a good chance you will introduce artifacting to your image. You need a very powerful computer to edit it and renting an HDV editing facility may be difficult. The CCD chips are also typically a stop or a stop and a half slower than the high-end DV cams. Plus, you can't just pop the result into an ordinary DVD player and watch it.

Even if your final viewing destination isn't an HD compatible device, down-converted HDV will, in most cases, look superior to video shot on consumer grade DV cameras. An HDV camera captures more than four times the amount of data that a standard DV camera does. Unless you're competing with a high-end pro DV cam, your down-sampled HDV will be clearer.

Many flat screen and plasma screen TVs will also play back HDV. To get the best effect, you need a resolution of at least 1280×1080.

Until/unless you make a decision on HD-DVD vs. Blu-ray (when they finally ship), you may be hard pressed to find a playback mechanism that doesn't involve either your computer or your camera itself.

Apple will let you burn HDV (and HD) to a common DVD via DVD Studio Pro 4.0 for playback on a computer through QuickTime.

Microsoft has a series of codecs which play back 720p or 1080i on your computer as well. WMV-HD (Windows Media Video-High-Definition) discs such as with the documentaries The Living Sea and The Magic of Flight are already available in some stores and from www.wmvhd.com. There is some commercial content available for WMV-HD, including the James Cameron classic Terminator 2 (the WMV-HD version can be found on Terminator 2, Extreme Edition). Authoring guidelines for WMV-HD are available on Microsoft's Web site.

Your computer display is most likely HDV capable, though your computer itself might not be. Microsoft recommends a 3.0GHz processor, 512MB of RAM and a 128MB video card. While sitting in front of the computer screen watching movies isn't really my idea of fun, I'm becoming more acclimated to viewing my laptop as a portable theater; comfortable viewing is often limited to one or, at most, two people. There are applications such as BlazeDVD from BlazeVideo, which are geared towards making your computer as much like a home theater as possible. BlazeDVD supports not only WMV-HD, but also just about every other popular video format and many audio formats including Dolby Digital 5.1 and DTS. All you need is that chair from the Maxell ad.

Can It Pay For Itself?

If you're a pro, you may be wondering how long it will take you to recoup your investment cost. Can you offer new services or charge more for HDV? A key deciding factor over your competitors will be the added value in offering HDV. HDV is not going anywhere anytime in the near term.

You'll upgrade eventually, and you're not the only person thinking that if you buy now, you'll be the first on your block offering HDV. You may be one of a thousand videographers with footage of a killer whale snatching a seal out of the surf, but if you have it on HDV, you may be one of three. But then, it might be that nobody's asking for that particular footage in HDV yet.

Convincing the Reluctant Boss or Spouse

You're sold, but you still have to convince your spouse that buying an HDV camera is better than a week in Paris. There's nothing like a demonstration to convince the recalcitrant. Download some HDV trailers, watch them in Windows Media Player or QuickTime. Be forewarned that you'll need to have potent computing power at your disposal, and that simply buying an HDV camera and editing software might only be the first step in a long series of upgrades necessary before you're shooting and producing HDV. Many video stores are displaying HD technology; it might be time to drop in for a demonstration.

My friend Robbie lost in his gamble on formats. Eventually he had to buy a VHS player. However, for years, he was king of the neighborhood: we were all in his living room every night watching Superman, The Towering Inferno, and Beneath the Planet of the Apes. And that counts for a lot.

[Sidebar: A Word from the Pro]

"Members who don't already have HDV are certainly looking at it to see how it's going to play into their future productions," says John Zale, Director of Educational Development for the Wedding and Event Videographers Association. "Right now the big sticking point is: How do I get this to my bride?"

But that delivery mechanism might not be as big a deal as people think, points out Zale, who was himself married in 1987 and has a wedding video shot on VHS.

"If I could go back in time and get my own wedding video shot on HDV, would I? Of course, but it's hard to really appreciate what you're going to want in 15 years. This is something you're not buying for tomorrow or next week; you're buying it for the future. So some videographers jump in with both feet and say, "we'll deliver you SD now and HD when it becomes available." Storing someone's video until players become readily available is not a bad idea and not very costly. You can certainly deliver it for a price now or an additional fee down the road. And it's something you can do whether someone contracts you to shoot in HDV or not."