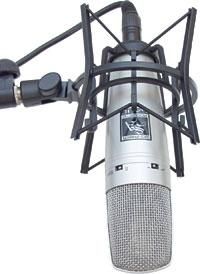 If you’re reading this magazine, chances are you have a camcorder and enjoy using it. That camcorder has a built-in microphone that generally does a decent job of recording sound. If you’re like many Videomaker readers, you’ve used your camcorder in a variety of settings and discovered that under less than ideal conditions, the on-camera microphone yields less than ideal results.

When On-Camera is Not Enough

The most common problems for on-camera microphones are subjects that are too far away and background noise that’s too intrusive. Worse is the combination of both of these negative factors together. Why can’t the on-camera microphone handle these problems?

Perhaps you remember from your science classes something called the inverse square law. In simple terms, this means that a sound twice as far away is only one-fourth as loud. A sound four times as far away is only one-sixteenth as loud (the actual equations are only slightly more complex). So a human voice that records with adequate volume three feet away is just one-sixteenth as effective at four times the distance: that’s just twelve feet. Now imagine that you’re shooting in the vicinity of a highway. The vehicle noise sounds loud even though it’s a hundred feet off. Because the traffic noise is already so far away, moving another ten feet away from the road doesn’t make much difference – it’s still almost 85% as loud. What’s the best way to get good sound under these tough conditions?

Make the Physics Work for You

Fortunately, the inverse square principal is a double-edged sword and you can make it cut your way. For example, if you move the microphone four times as close, the voice will be sixteen times as strong. But what if you want a wide shot and can’t move the camera in? To do this you need a microphone that is not attached directly to the camera.

There are four ways to do this. First, you can give your subject a hand-held microphone. This might be fine if you’re interviewing guests at a wedding reception. Another solution is a lapel (or lavalier) microphone. These can work very well under many conditions, but if hard-wired to the subject they can be inconvenient and if wireless they’re dependent on radio transmitters that can have interference or poor reception. Boundary (or PZM) microphones sit on flat surfaces and are good for conference table groups, but not much else. The fourth answer, and usually the best, is a boom or fish-pole microphone. Getting the microphone closer to the subject is only one of the ways you can make the physics work for you.

If the varieties of microphones listed above aren’t already bewildering enough, they also come with different pick-up patterns ranging from omni-to super-cardioid in a handheld or a lavalier microphone. You can use anything from a cardioid to a long shotgun microphone on the end of the boom pole.

Lavalier microphones come in wireless and hard-wired configurations. Although wired lavaliers are more dependable, they tether the subject directly to the camera, reducing freedom of movement for both. Many people pick wireless if they go the lavalier route. If you’re shooting a situation where several people are very close together and the background is hushed, such as a wedding ceremony, you might well get away with one microphone on the most central person. Under most conditions, however, you’ll need one wireless lavalier for each person you’re shooting. If you decide you need a wireless lavalier system, Audio Technica, Sennheiser, Azden, Samson, Sony and others make quality units at a variety of price points. Features to look for are UHF instead of VHF to help dodge interference and True Diversity for rock solid reception.

The boundary microphone, also called surface mount or PZM, has a flat, unobtrusive form factor and is designed to pick up groups seated around a conference table. These are omni-directional and are very specialized for their designed usage. Most video shooters won’t find them to be the best choice for an all-purpose microphone, but if you’re going to shoot a corporate board meeting, you can’t beat a boundary microphone.

A microphone on a boom pole may be the best choice for recording multiple subjects at a distance from your camera. There are still some serious drawbacks, however. First, the obvious: you need a boom pole. Proper boom poles will generally cost at least two hundred dollars, but the good news is that you can improvise with painting poles and other similar gear available at your local hardware store. The bad news is that you’ll need someone to hold the boom, and holding a boom pole can be hard work. It requires skill to keep the microphone close to the subject but out of the frame, more skill to make the most of the microphone’s directionality and real expertise to do all of the above while following the dialog of multiple subjects. Boom-mounted microphones can sometimes get close, but, unlike a handheld, never just a few inches from the subject’s mouth. Shotguns need to be the more sensitive condenser-type microphones, and those need some type of power source. Since many camcorders don’t supply phantom power, the best choice is usually an electret condenser that runs off a small battery.

Most sound engineers prefer a short shotgun as the best all-around boom-mounted microphone. A popular electret condenser short shotgun is the Sennheiser ME-66 (you also need to buy proper power module). Azden offers some less expensive electret condenser units too, as do Audio Technica and many others. If your camcorder or mixer has phantom power, you might want to investigate the Sennheiser 416, which is a highly respected, industry standard short shotgun. If you shoot in confined areas you’ll need a mike with a cardioid or super-cardioid polar pattern.

You’ll find that it’s very satisfying to use your new microphone to get great sound under conditions that would make the on-camera microphone all but useless. With the right microphone and a bit of experience, soon you’ll be making completely professional sounding videos.