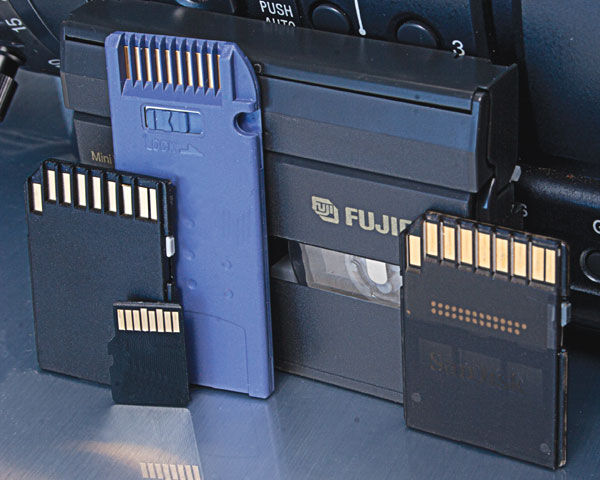 Video cameras in the past relied on magnetic tapes (VHS, VHS-C, Super 8mm, MiniDV, etc.), and as a result had to be built large enough to accommodate the size of the tape – not to mention being limited in the storage space due to the physical form factor of the cassette being used. Today’s cam’s use built-in hard drives, spin mini-DVD discs and even use flash memory (“Look Ma, No Moving Parts!”). But the majority of new camcorders today rely on memory cards as the blank media purchased for either supplementing internal memory or acting as the main reservoir for the video being shot.

Yes, DV tape is still being manufactured because there are thousands of miniDV and HDV camcorders still in use, and some manufacturers, while not making new designs, still carry older versions of miniDV camcorders. Canon’s GL2 is a classic example, introduced in the early 2000s, you can still buy them and users swear by them. MiniDV tapes have a lot of good reasons to still be around, they are great little archive tools for raw footage that you don’t want to compress like you would with a DVD, and if you run out of card or drive space, you can always dump your raw files to miniDV and it’ll be good for a long long time. 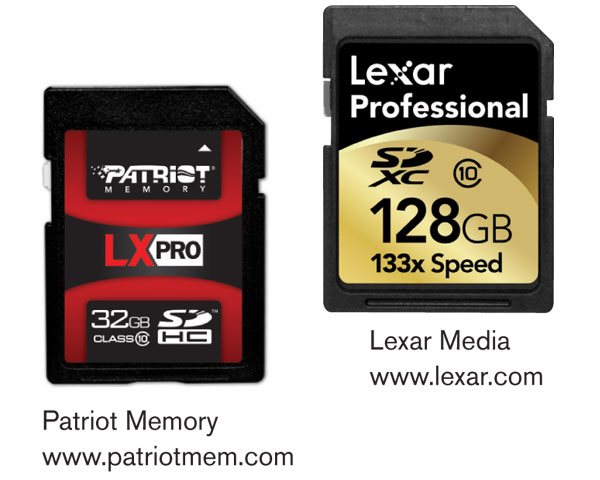 Memory cards have a lot going for them when it comes to their use as the blank media for a video camera – on a purely size aspect they’re small enough to never be any farther away than on a desk or shelf, or in a drawer, purse or backpack. They’re durable, shock-resistant and hard to damage (at least, if you practice a modicum of common sense when handling them). Designed to only be inserted correctly, you really have to try hard to mess up inserting one and about the only disadvantage is that there’s always that moment when you kick yourself for not getting the one with the greater storage capacity than the one you’re holding right now.

So what’s the catch? How about the fact that there’s more than one type of memory card you can get – quite a few of them in fact. Passing over the fact that not every memory card will work in every video camera, the size of the card itself becomes an issue — as does its data capacity and the physical speed at which it can accept and transfer video data (faster always being better, for sure). Knowledge may be power, but having a basic understanding of the types of memory cards that can be used as blank media in a video camera is just plain vital. So peruse and choose wisely. 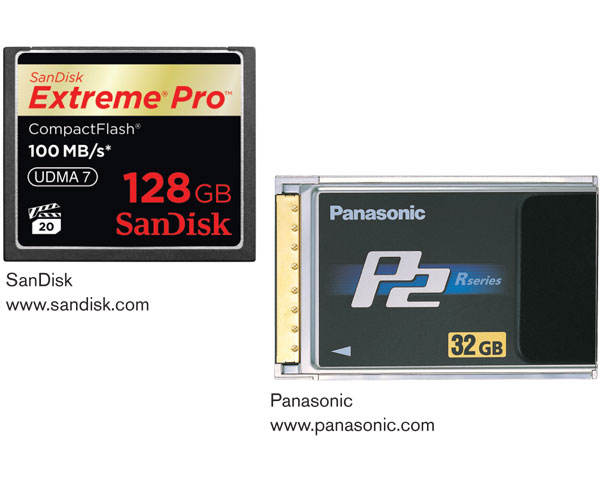 If we were beatniks, we’d say “CF is really square, man.” One long edge provides plenty of connector space and in the world of retro, CF rules. Or call it CF Type I since CF Type II exists, but mainly as a shell for holding a Micro-drive or WiFi electronics. Type I is svelte enough, but it’s still chunky gravy compared to the miniscule depth of its competition. Manufacturers include SanDisk, Transcend, Kingston, and Lexar among others.

Rather than having come to life on its own, some kudos must be given to the MMC (multimedia card) that never quite caught on. The nifty thing you will notice if you look closely is that there’s a sliding tab that will lock out data from being put on the card. Reverse its position to eliminate the function. Manufacturers include SanDisk, Kingston, Transcend, Fujifilm among others.

Capacity: up to 2GB

Read/Write Transfer Speeds: Speeds average at about 6 MB per second.

Cost: Retail prices range from a couple of dollars to over $50

Think SD but faster and with greater capacity for storage without bulking up. Manufacturers include PNY, SanDisk, Transcend, Kingston, Lexar among others.

Con: Same tiny tab and ease of loss. Not compatible with devices that use SD cards.

No surprise that it’s a Secure Digital card shrinky-dinked, right? Keep a SD card adapter handy if you’re planing to use it on your PC. Manufacturers include Kingston, SanDisk,Transcend among others.

Con: Not all devices can accommodate the card size directly. Higher capacities comparable to SD cards not available due to size of card.

Micro goes one step farther than Mini, and you’re often likely to find this one used in cell phones and other portable devices where size is always an issue. Considering it was originally called “TransFlash,” we’ll go with Micro, no problem. It also comes in an SDHC mode (MicroSDHC). Manufacturers include Kingston, Blazing, SanDisk among others.

Con: Not all devices can accommodate the card size directly. Higher capacities are more expensive due to a miniscule size when compared to SD cards.

Sized like a stick, this proprietary standard is Sony’s baby either in the PRO, Pro Duo or Pro-HG Duo models. They were small to begin with, and then they got even smaller. Manufacturers include Sony, SanDisk and Lexar among others.

Con: Limited series of devices that use the proprietary format.

Designed for use in camcorders and other P2-compatible devices, this memory card is designed around the PCMCIA card form factor that laptops love to use – to call these small is to be sanity-challenged. Flash memory provides fast data transfer speeds that can seem almost instantaneous – especially compared to the flash memory cards consumers primarily use. Manufactures include Panasonic, Fujifilm among others.

Capacity: up to 64GB

Cards that Couldn’t Cut It

1. MultiMedia Card – More similar to a memory stick than a SD card, this pup kept the connectors on its backside. Didn’t go over well with just about anybody.

2. SmartMedia – similar in design to a CF card, if lighter and smaller. Front facing contacts may have looked cool but gave up reliability, dependably and ultimately salability.

3. xD-Picture Card – similar to a SD card but the format was not compatible with the majority of devices out there and went by-by quickly.

DVDs, once the baddest dog on the block, now seem to have been relegated to the dog-pound in the light of flash memory and even hard drives. No cameras manufacturered today shoot to DVD, but there’s still time when the storage capacity and near-universal availability of a DVD player makes storing content on these discs worthwhile. Providing you know which disc is which and what disc holds what. As the following provides:

DVD-R (minus): Near universal acceptance on any DVD player makes this the disc to use, providing you place all of the content on the disc at one time, and the length of the content doesn’t exceed 4.7GB.

DVD+R (plus) follows the same storage capacity as DVD- does, only playback devices other than DVD players aren’t quite as plentiful (modern computer DVD drives handle both DVD- and DVD+ with equal ease).

DVD+R DL: Stands for Dual-Layer or Double-Layer and ups the storage capacity to 8.5GB.

DVD+RW: Stands for Read/Write (or Re-Writable, according to some) which, as the name suggests, means that you can write content onto the disc, remove it and re-write new content.

Marshal M. Rosenthal is a technology and consumer electronics freelance writer and has been writing for Videomaker since 1998.