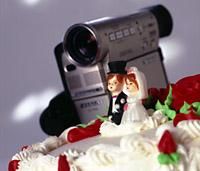 Summer is in the air, flowers are in bloom, songbirds are returning to the skies, and here come the brides!

Perhaps you’re a new camcorder owner who’s just been
volunteered to tape a friend’s upcoming nuptials. Or maybe you’re
a dedicated prosumer interested in earning some extra cash as
a weekend warrior in the wedding game. Regardless of
why you’re considering shooting your first wedding, one thing
is certain – This handy wedding video planner will provide
you with everything you need to know to start getting ready for
the big day.

Make no mistake; doing a good job of videotaping a wedding ceremony is
a challenging task. After all, unlike many other types of videography, if a
critical shot is missed during the wedding ceremony, calling for a retake is usually
out of the question.

Actually hooking up and recording a
few minutes of footage the night before you shoot will give you
confidence that everything will be in good working condition when
it really counts. If possible, make arrangements to attend the
rehearsal. This will give you an opportunity to test your gear in
the place you’ll be shooting, before the day of the big event.

Today, most weddings have a wedding coordinator to help organize
the elements of the ceremony and/or reception. The smart videographer is
careful to make an ally of this person. Similarly, gaining the cooperation of
church personnel or the minister can be critical to your success. Expect the
church to have restrictions about camera placement near the altar, and where (or
even whether) they allow supplemental lighting. A respectful, professional
demeanor when dealing with others can help them see you as a part of the team.

After setting up your equipment at the church, the first order of business is getting your establishing shots. These shots will set the scene for the wedding ceremony. Here are some to include:

Cutaways are incredibly important if you’ll be editing your footage. They can function as a kind of video
scotch tape. That’s because a jump cut often occurs when you edit between
two scenes that share the same camera angle. Using a cutaway to another
scene between the two similar shots smoothes out the flow of the video. Here
are some ideas:

A wedding is a ritual affair. The rituals are different from culture to culture and religion to religion, but they all have highlights. Here are some common highlights a good wedding video must include:

From the moment the music fanfare heralds the appearance of the bride she is the central focus of everything that happens. By tradition, and by virtually universal acknowledgement, this is her day. Her entrance will typically be accompanied by the standing of the entire audience. Here are some tips for covering the entrance:

The reception is your chance to
make sure you have good coverage of wedding party and guests. Many
videographers make it a point to visit each and
every table, to give the couple a record of those who attended.

On arrival, the savvy videographer will immediately look for cutaway shots such as:

Eric Cosh, owner of Paradigm Video Productions in Scottsdale, AZ. – a veteran of hundreds of wedding videos and
the source of many of the insider tips in this story, puts the entire wedding
videography process in a wonderful perspective: "Try to think of the wedding tape
as something that’s going to be around forever," he suggests. "In many cases,
your videotape will be the only way future generations will experience what
their ancestors looked and sounded like."

That’s why wedding work can
be so fulfilling. You’re making a video that has the potential to be
treasured for generations to come. Learn to capture the human drama and you’ll
be well on your way to becoming a good wedding videographer.