To view the tutorial video for 2.5d Animation, the prize winning video Polar Classic, and download project files to work along with the tutorial, click here.

The Polar Classic, by Mark Wickman, was the 1st Place winner in Videomaker’s 2005 Short Video contest, in which Mark made an animated video, using still
photos. We’ve received many letters
asking “how did he DO that?” So we asked him to create a tutorial on just how the process is done. We discovered that the end results actually depend on the beginning… in the planning stage.

The Polar Classic is an annual golf tournament held the last week of February in Beijing. The client had a simple request: produce an interesting music video portraying this fun but competitive event, including footage of all the participants. I shot still photographs, and the client would later provide more than twelve hours of DVCPRO footage from the event.

I confirmed the animated stills approach after spending several hours viewing the video footage, which was not very exciting. I selected the 100 best photos and brought them to life, using a two-step process:

As always, pre-production is key. One must “shoot to animate.” Some keys thoughts on this approach:

I selected and processed 100 of approximately 300 stills shot at the event. That represents an ideal shooting ratio compared to the video alternative.

If you have some music in mind, understand its length and beats per minute in order to calculate the number of photos you need. If you are uncertain, tap it out. Polar has a fairly punchy progression: one hundred photos at three seconds for most of the animations. On some wedding videos, I have used a mix of video and longer animations to good effect.

I always shoot JPG format. With today’s DSLRs, you have more than enough resolution for a beautiful PAL or NTSC image. I suggest pre-processing all of your images to the same size, orientation and file type, if they are not consistent. If you need adjustments to clean up your images, do this in Photoshop before the processing described at right.

When selecting photos, make brief notes on your layering approach and potential layer motions. A two-person approach for dividing the layering and animation work was very effective, enabling us to deliver this project quickly – three weeks from event to DVD.

Objects in your photos need to be isolated into Photoshop layers for animation in After Effects. The Photoshop work represented 35-40% of the total project hours. We used this simple process to create the PSD files for each of our photographs:

The Polar Classic project contains subjects in front of their actual backgrounds – that is to say, we cut everything out (step 6c). If you have subjects who can pose, green screen is worth considering; you can then composite the keyed subject onto photographed backgrounds. If you haven’t tried pulling a key on your DSLR, try it – it sure beats the shortcomings of DV!

Most of the PSD files for the Polar Classic animation consisted of 3 simple layers: Original, FG and BG. A notable exception was the title shot. This title animation consists of 70 or 80 layers, mainly golf balls, putted across a putting green to ultimately form the title of the video. 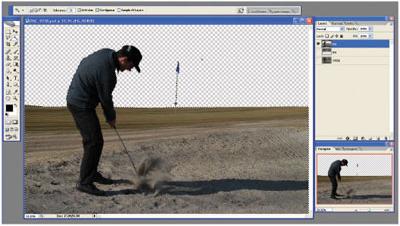 Caption: A great deal of time and effort goes into prepping your layers in a photo editing software. Create a system for naming your layers that works for you and for interpreting them in After Effects.

Here is a summary of the general workflow:

The following covers three examples of the After Effects compositions, which include most of these effects classes.

One of the most subtle and powerful effects is using a depth-of-field change to direct the viewer toward your key subjects. This example shows how you can animate blurred keyframes on FG and BG layers to simulate a camera’s method of selective focus. The Position keyframes, created by a wiggle effect, simulate the two people walking. The Scale keyframes simulate a simple camera zoom by enlarging the objects over time. 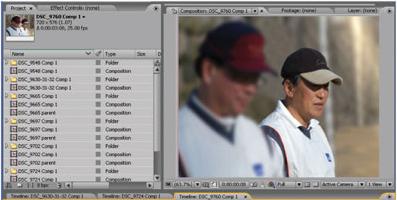 Caption: Animating a Blur effect can simulate a shallow depth of field between multiple layers.

As the original layers have much higher resolution than our PAL or NTSC frames, we have plenty of pixels to play with. Animating the position and scale keyframes of the FG and BG layers in AE can help us achieve a moving camera effect (parallax).

The above example shows the use of position keyframes on FG and BG layers to move the layers in X and Y. Animate the scale keyframes equally on the two layers to achieve a zoom-in effect.

Play close attention to the anchor point of each layer as you animate the scale and rotate properties.

These approaches to creating movement and depth of field are a much lighter approach than using 3d layers and cameras. For multiple layers and complex movements, the latter approach will be superior. 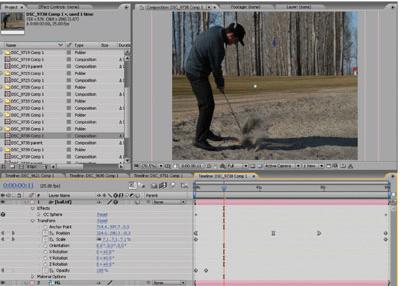 Caption: Setting your layers into a coordinated motion will simulate a camera move.

The next example shows the original Polar Classic title screen on the left and the underlying AE composition on the right.

We processed the underlying base photo of golfers on a putting green in many layers. We animated five of the golfers so that they each putt golf balls across the green to spell out the title when the balls rest in their final position.

The FG objects in the PSD layers consist of:

To create the BG layer, the putters (but not the arms of the players) were removed from the original photograph. Note that in the AE composition, simple position keyframes are used for the starting and finishing golf ball positions, along with scale keyframes to sell the effect of the balls moving closer. Rotation keyframes are used on the putter layers (anchor point set at the wrists) to simulate the putter motion.

After Effects has an amazing set of effects and tools to accomplish most shots. How would you accomplish a shot of a golf ball rolling on the green and dropping in the hole? Check the online tutorial to see how we handled this shot in Polar Classic.

Caption: In After Effects, compositions can become difficult to manage, such as in the golf ball title above, with many different layers. Embed compositions of more complex animations to simplify your work space.

With all of your AE compositions rendered out, compositing is very straightforward. Each animation stands on its own, so I avoided dissolves between the shots. The main task in the compositing application is to sequence the animated clips.

Keep your original stills, your PSD files, the AE projects and your rendered animations well organized. You will usually find yourself often going back to tweak animations and then previewing the final results within your compositing timeline.

I hope you find these techniques useful in your ongoing quest to produce more compelling content. 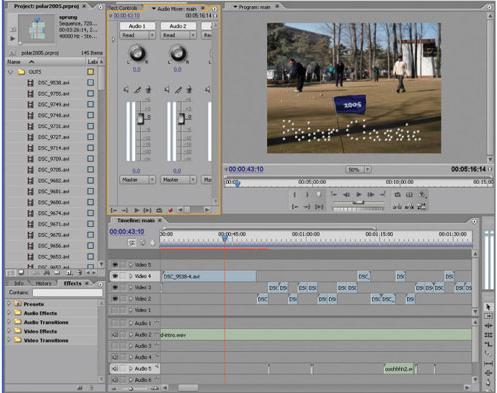 Caption: Use music and sound effects to help tie together your animation sequences.