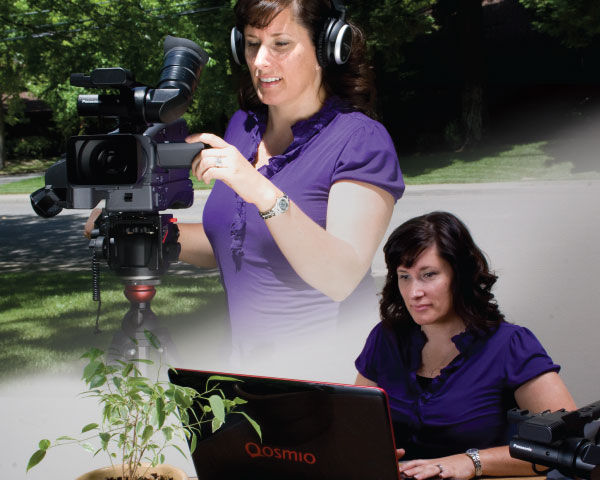 Shooting and Editing, the third instillation of our four-part series on How to Make a Documentary, covers production. Part one covered Story Development and part two discussed Funding, Financing & Budgeting. Now to finally head out into “the field.” In our next and final installation we will discuss the many layers of Distribution, to help you discover ways to get that hard work seen.

You have your gear, crew, schedule, subjects and money; time to “roll camera” (that is if you camera actually “rolls” video). If you’ve put in your time and hard work during pre-production, production can be relatively smooth. It’s rumored that Alfred Hitchcock never looked in the viewfinder of the camera because he meticulously storyboarded his shots enabling the director of photography to know exactly what he wanted. But even if you are as thorough as Hitchcock, problems will arise. Unforeseen challenges are the norm, not the exception. How you “roll with these punches” will partially determine how good a filmmaker (or video producer, in our case), you really are.

You’ve already figured out in pre-production how big your crew is. This involves calculus. Too few people and you might not be able to get the work done properly. Can you monitor the visual and the audio at the same time? And is someone walking off with your camera bag while you have your eye glued to the viewfinder? Do you need a line producer calling ahead to the next location to make sure everything is ready to go? Do you need a production assistant to run out and get more DV tape or to get lunch ready for the crew. Having a crew is nice, BUT, too big a crew can slow you down, make you less conspicuous in public places or just cost you too much. Getting the perfect size crew is tricky.

Scouting is a good idea. Is this pre-production or production? Doesn’t really matter, just do it the best you can. If you are shooting an interior shot at a mall, do you need permission? Is there a lot of street noise that will “leak” into the shot? Will you need to cover windows with cloth or neutral density gel? Are the power outlets three-prong or two-? Are there power outlets at all? Where is the circuit box? Will your lighting set-up blow/trip the circuits and if so, might you need a pocket full of replacement fuses? Try to scout a location on the same day of the week and at the same time of day that you will actually be shooting. The sun has a nasty habit of moving throughout the day and some locations are louder or quieter on the weekend then they are on a weekday. Also, Monday might be garbage pick-up day in your planned spot, and you scouted on Tuesday when it was quiet. 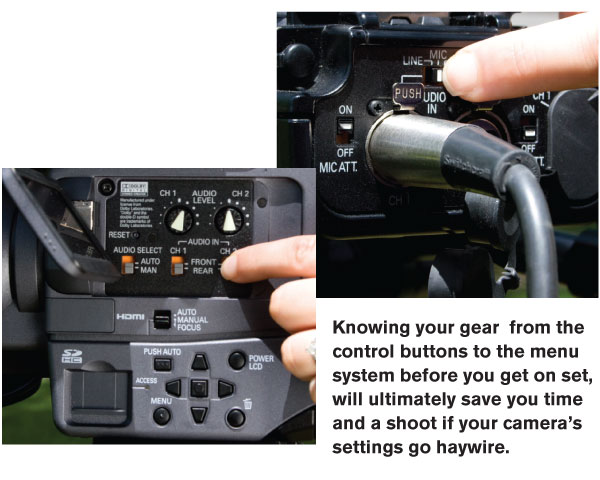 You really need to know your gear. It’s great that you were able to somehow afford that new HD camera but be sure you know where the record button is before your subject is sitting in the interview chair and your crew is standing around waiting for you to shout, “action.” You should not only know how to adjust all the settings – focus, audio levels, iris, white balance, etc. – but you should be comfortable with working in full manual mode. Take classes, buy tutorial DVDs, put in the time to test your gear and/or learn from someone who knows.

Do not underestimate sound! Was it Kubrick who said “A film is 10 percent image, 90 percent sound?” Trust me, it is easier to sit through a poorly shot documentary with good sound than a well shot doc with terrible sound. I can’t emphasize this enough. I shot a doc last week in which I had three separate audio tracks: shotgun mic mounted on camera, wireless lavaliere recording to camera and a shotgun mic recording to a portable hand-held recording device. 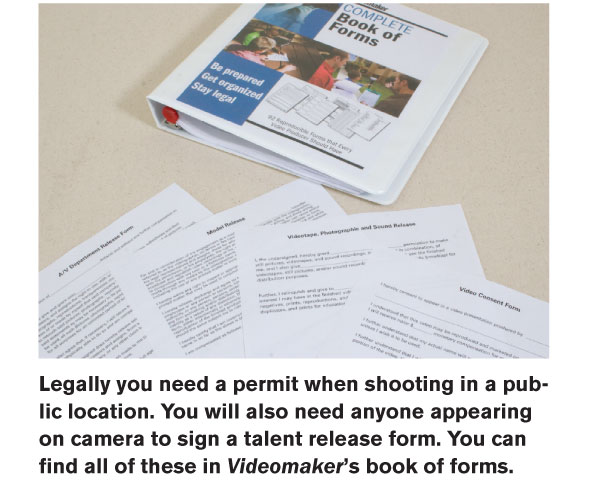 I usually find it easier to ask for forgiveness than permission. Technically you need a permit from the local government to shoot anywhere in public. You get these permits from a city’s Film Commission which is usually located at City Hall. Generally speaking – and this changes from city to city and even over time – the government and police aren’t bothered by you shooting in public if you are not bothering the public. If you are a three-person crew with a smallish camera on a tripod and you are not endangering the citizenry, you will most likely be left alone. If you have a twenty person crew, a shoulder-mount sized camera on a jib arm, lights and extension cords lying across sidewalks… you get where I’m going… the police are not going to like this. Use common sense and be safe; for you, your crew and the public. If stopped by the police, move on without an argument. They are rarely rude or unreasonable.

Have every person who appears on camera sign a release form. If you don’t do this, it will come back to haunt you. This is why I always have a line producer in the crew. This person makes sure everyone signs a release form, keeps an eye on the whole location watching out for thieves and for general safety, is taking still photos and taking care of future needs such as meals or logistics for the next shoot. Sample release forms can be found on Videomaker’s website online. Alter them to include your production company’s name and the project’s working title.

B-roll is the Glue

Shoot a ton of b-roll. The more the better. You are not a TV news crew who must shoot, edit and have the story done by the 6pm show so shoot, shoot, shoot. It will mean more time logging and editing but it is better to have the footage than need to return to the location during post production, if that is even an option. 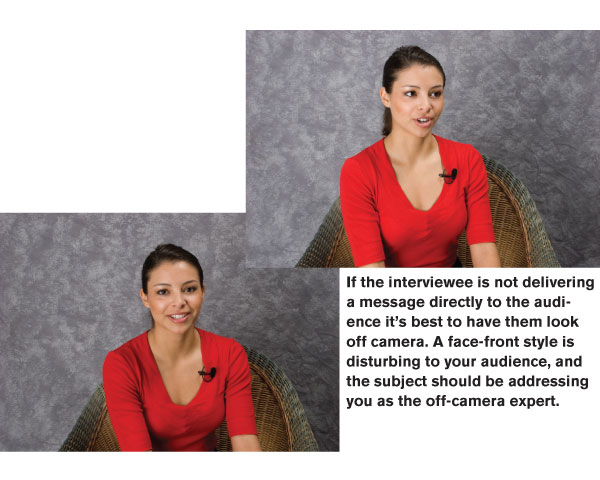 Finally, a few notes on interviews and interviewing. Your interviewee is usually giving you their time and effort without compensation. Be mindful of this. You should have your lights, camera and audio set-up and ready to roll before they walk onto “the set.” Are they wearing eye glasses and if so, are the glasses reflecting any of your lights in a distracting way? Is the interviewee’s face oily? You should have a rice-based, translucent face powder with applicator at all times. Is the interviewee nervous? Having the camera as far away from the interviewee as possible will not only help with this but will most likely give you a more shallow depth of field, which is usually desirable. Converse with the interviewee about something other than the subject of the documentary before you officially start shooting (though be sure to have the camera rolling at this time; tape/hard drive/card space is cheap and you might get something good).

The interviewee usually does not look directly into the camera when answering questions. The typical set-up has the interviewer sitting to the right or left of the camera, between the cinematographer and subject, just off camera. Typically, only news anchors stare into the camera. Study other documentaries for framing and backgrounds. Iara Lee’s Modulations (1998) has some excellent interviews. Or watch long form news show such as 60-Minutes or almost anything on PBS. Finally, be ready to go off script. Ask follow-up questions. Be ready to explore an answer in more depth, don’t just read from your list of twenty questions and be done. 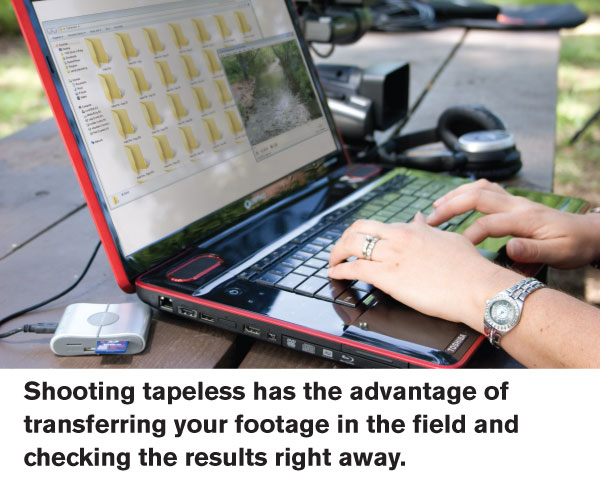 Post production for a documentary is not too different than editing a narrative. There is a good chance you don’t have a storyboard and slated shots and you most likely will have more footage than a narrative project. Logging your footage will be time consuming but helpful. Take the time and be thorough.

Having back-ups of all my media is important. I shoot to memory card and “dump” to hard drives during production so I actually do this in the field but you should think of having all your video and audio backed up. If you shoot to tape, when you import your footage into your editing program, your scratch disc will hold the footage you will work with and your tapes become your back-up.

The more organized you are with labeling shots, bins (folders), locations, types of shots, etc. the smoother and more efficient your workflow will be. Hire an assistant editor if you are not meticulous enough to do this yourself.

There it is, a few tips and tricks to get you through principle photography and the edit process. Remember, practice makes perfect. Get out there and produce. Your second documentary will most likely be better than your first and your third even better. Once you make something you feel would be of interest to others, its time for distribution. See you in the future for the conclusion to this four-part series.