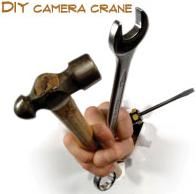 Moving shots using a jib or crane provide an added dimension to any video, allowing the camera to sweep from a high establishing shot as it follows the action to a worm’s-eye perspective. But the price of a good jib or crane can tax even the most established and well-paid video producer.

Search the internet, and you’ll find dozens of designs for DIY video equipment, from simple one-legged monopod supports to elaborate cranes and dollys. This issue’s Tutorial focuses on two do-it-yourself crane and jib designs. The crane, designed by Brian Peterson, is one you might use in your big-budget productions. It costs about $500, which is thousands of dollars less than a similar Hollywood device. The jib, by Tom Benford, is an easy-to-assemble design to get those quick-and-easy moving shots that anyone can operate for about $50. Read the article here. The differences between the two all come down to what you want to shoot, ruggedness, smoothness and flexibility.

This text guide follows along with the video tutorial, which can be viewed here. But before you get out your trusty toolbox and strap on that toolbelt, think first about your needs. Will you be shooting mostly outdoors? If you’re doing interiors, you need to plan for ceilings with low height. What size video camera are you using, and do you plan to upgrade? Think about transport: once you’ve built it, can you get it into that 1977 Pacer hatchback? The choices are yours… your circumstances will determine your equipment needs. The good news: you don’t have to be a major builder or tech guru to build these.

Cranes are usually bigger than jibs, and they can carry not just the camera, but often the crewmembers operating it. Brian Peterson’s crane was designed to be robust and hearty, with a potential to upgrade and accessorize at a later date. Brian planned it with the length of his cargo needs and the extreme heights he expects his camera to achieve in mind.

Picking the right base for your crane depends on the load. A larger, more robust setup requires an extremely sturdy tripod to begin with.

STEP 2a & b: Strengthen with Spreaders

You need to super-strengthen the tripod that will act as a support for the crane arm. This is a spreader system created to keep the tripod legs from splaying out or collapsing while weighted by the camcorder.

Barbell plates make weighted feet to stop the tripod slipping while supporting up to 80 pounds of gear, and they secure the tripod head to prevent movement. Later, a fulcrum will be added.

This steel head assembly was designed to go on top of the tripod head in place of the tripod plate. The original head, plate and leg support can still be used as a traditional tripod later.

The custom-fitted steel handle allows you to tighten the drag on the fulcrum for smooth and slower-moving shots.

3 lengths of 2″x5″ boxed aluminum weigh about 8-10 pounds each. These have custom cuts to fit bolts for attaching. The center bar has a sliding 5-pound weighted scale, like a standard weight measure in a doctor’s office.

A weight bar from a dumbbell assembly was modified to fit at the end of one of the aluminum pieces. This is to hold the counterweight assembly that will attach the camcorder to the top of the crane.

The I beams are the support braces that are used to hold the sections of the crane arm together.

The head assembly has a flat 1/8″ aluminum surface, two sides and spacers made to fit the arm assembly. An ordinary tripod head attaches to the top of the flat head for the camcorder.

Make sure you always level the head of the tripod on both axes BEFORE you attach the crane assembly.

STEP 11: Putting It All Together

Assembling the crane takes about 20 minutes from pulling it out of the car to setting it up on location.

Closeup view of the fulcrum point.

This design, combining low- and high-angle shots, makes for some very smooth moves.

To view the tutorial video for DIY Crane, click here.