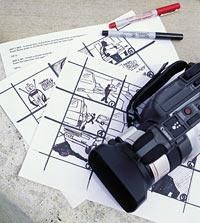 A woman is carrying boxes out to her car. At the same time, a vehicle speeding into the parking lot, strikes her down. As paramedics try to revive the woman, the viewer wonders why such things must happen. Luckily, there is a solution to such problems: the Guardian 2000 Personal Protection System. The scenario plays one more time, this time with the woman wearing the Guardian 2000 headset. She is able to avoid the accident and Guardian gets the thanks.

The script calls for a person to be hit by a speeding vehicle. But don’t worry your insurance rates won’t sky rocket. We’ll do it with a little camera trickery and some tight editing.

The accident will be comprised of three shots. The truck speeding into the lot (SHOT 3). A shot of the speeding truck locking its brakes in a panic stop (SHOT 4), and a telephoto shot from behind the truck showing the woman as she disappears in front of the vehicle, the truck rocking forward as it stops and the boxes flying into the air (SHOT 5).

When you shoot SHOT 5, have the driver of the truck accelerate for about 20 feet, then brake hard to stop about three parking spaces away from the actress. When the driver brakes, the nose of the vehicle will dip. Your actress should use this motion as her cue to throw up her arms and fall to the ground. It is important to shoot this shot using a telephoto lens setting. Why? Because when you zoom to a telephoto setting, the optics of your camcorder’s lens cause the image to look compressed. A wide angle lens setting would reveal the fact that the truck actually stops more than 20 feet from our actress, but the telephoto setting will make it look like the truck hits her.

Shoot SHOT 4 without anyone in the roadway. This way, your driver can accelerate and skid to a stop without putting anyone in danger. Pan with the truck as it passes you, but allow the truck to continue out of the frame so you don’t show the hood or front fenders. SHOT 4 serves two purposes. It establishes the speed of the vehicle as it moves through the frame and it provides a convincing sound track as the tires skid. To pull off the effect most effectively, continue the sound of the skidding tires and honking horn from SHOT 4 under SHOT 5.

Now, you can take this storyboard and go out and have some fun shooting your own commercial parody.