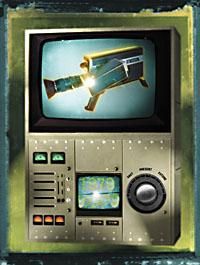 You know, when you stop to think about it, video allows you to open a window to the past and experience a short audio-visual glimpse of times gone by. To illustrate our point, we’ve geared up the Videomaker time machine for a short trip back in time. Our destination: 1979. Our goal: to discover what home video production was like before the invention of the camcorder, back when VCRs were new and Jimmy Carter was president.

Traveling with us is our tour guide and video historian, Roger Miller, a self-styled "gadget freak" who took the plunge into home video production way back in the year of bell-bottom jeans, wide lapels and disco music. If you’re old enough to remember those days, you’ll recall that this was an era when video gear was expensive, the resolution wasn’t all that great and all of the controls were mechanical. We’ll ask Roger to share his experiences with us about those early days of home video in the hopes that we might be able to better appreciate how far we’ve come in this exciting hobby in just a few years. Remember, the camcorder wasn’t invented until the mid-1980s, so video pioneers like Roger had to carry the cam separate from the corder. The latter usually took the form of a portable VCR that you held in your left hand while you steadied the camera on your shoulder with the right. It’s not exactly an easy apparatus to carry around with you on a regular basis, but early video enthusiasts like Roger found that they could operate them easily enough to get them started in the craft.
Okay, time machine ready: insert the tape, press play…

A Two-Handed Hobby
As we step out of the time machine into the late 1970’s, the first thing we notice when looking at video equipment is that the gear is more than just heavy, it’s expensive. "In 1979," Roger says, "the buying decision is a lot different because we all earn so much less money and the equipment costs so much more. Typically, it cost about $3000 to start shooting a home video today. If you recall, in 1998, the price is fast approaching 1/10th of that cost." Here in the late 70’s, blank tapes carry a list price of $25 each, and usually are sold for around $21.

To confound matters, people who are interested in shooting their own home video have to choose between two incompatible formats: VHS and Beta. "I have decided on the VHS format because the transport is simpler and more reliable, and because VHS has a 4-hour record capacity. Record time is a big issue because the tapes are expensive."

Roger’s choice for a camera is the Panasonic PK300, which he bought on sale for $777, down from its original price of $1500. "The PK300 is rated at 100 lux, and has a 6 to 1 zoom lens. It weighs 12 pounds and burns about ten times the power of the camcorders of the late 1990’s, and it still needs a portable VCR to make a remote recording. In 1979, portable VCRs are just starting to show up in the stores, but at $1500 to $2000 they are well out of my reach." In these early days of his video hobby, Roger and others like him literally find themselves cabled to an ordinary home VCR, which is top-loading, heavy, mechanically controlled and lacking in many of the features we take for granted in 1998. By "mechanically-controlled," we mean it has a dial that you turn, click-click-click, to change the channels, and a wired remote control that consists solely of a pause button to get rid of commercials. "No forward or reverse scan, no hi-fi audio, not even a shut-off timer," Roger reminds us.

Early Edits
Roger’s first VCR, a Panasonic PV1000, set him back $744. A week later, he is going to buy another one so he can do some crash editing, which basically constitutes the copying of selected scenes from the source tape to the record tape by using the pause buttons of both VCRs to control the edits. "In this day and age," says Roger, "serious home video editing consists of taking your footage to a place that sells industrial video equipment. There you pay $25 to $50 an hour to rent an edit bay, bump it up to 3/4-inch videotape, edit your footage and then dump it back to your VHS or Beta master tape."

For a time, this simple two-deck setup will serve Roger well; he will shoot his first family Christmas video this year, entitled "The Christmas of 1979." Some of the reactions of Roger’s subjects are very different from what you might see in 1998 on home videos. It’s difficult for us to remember that in only twenty years, portable video recording equipment will be commonplace. In viewing Roger’s tapes, his subjects show an awe of the technology, an amazement that their image is actually appearing on the same television set that brings them Johnny Carson and news about the Iranian Hostage Crisis.

Here in 1979, The video revolution that is taking place in American homes is changing the lives of all who embraced it. For those who don’t, the subject of home video is still newsworthy at the very least. Roger’s personal videotape library this year includes a selection of televised news reports on the topic of the home video revolution. One report, introduced by Jerry Dunphy, focuses on some of the changes the new video technology has brought about in the lives of those who use it. In another report, introduced by none other than Walter Cronkite, people speak very optimistically of gaining the ability to watch concerts on video without leaving home, or paying one small price to rent a movie for an entire week. There is speculation in one news report that people might stop going to the movie theater because video technology is cheaper and more convenient. Luckily (as we know) for the movie industry, that prediction doesn’t come true in 1998, primarily because the experience of watching John Wayne on a forty-foot screen is far more intense than that of watching him on a twenty-seven-inch television set. Another speculation is that people will be staying at home most of the time to be with their families (and their VCRs). There is even speculation about a futuristic, automatic video vending machine. People believe that you will be able to just pop in your credit card and pop out the tape you want. Nestled into the middle of all of the news segments is a brief interview of a young video enthusiast named Roger Miller, who comments on the topic of video with the same naïve enthusiasm displayed by most of the people in the news reports of the day.

1982: An Upgrade
As we set the dials on our time machine to bring us back to the present, Roger reflects on the passing years as they slide by us on our journey back to 1998. "In the early years of home video, the technology that I had hoped for was a VHS-based home edit bay. I was always careful to preserve all of my raw footage because I knew that someday real VHS editing equipment would be available for the home. By 1982, it was, for $7500. I couldn’t justify that kind of money for a hobby, so I bought the editor, built a video business around it and let the customers pay for it."

Home at Last
Today, Roger Miller works for Panasonic; having been in the forefront of the video hobby, and having formed his own video production business before there was such a thing as a camcorder, his passion and enthusiasm for the craft earned him a rewarding career in the video field. Though he marvels at the newer, fancier cameras available today, he still looks fondly upon his old Panasonic PK300. "It’s pretty much all you need to shoot a Christmas video today." Indeed, it is–and Roger Miller’s twenty-year fascination with video is a testament to just how much you can get done with limited gear and a limited budget.