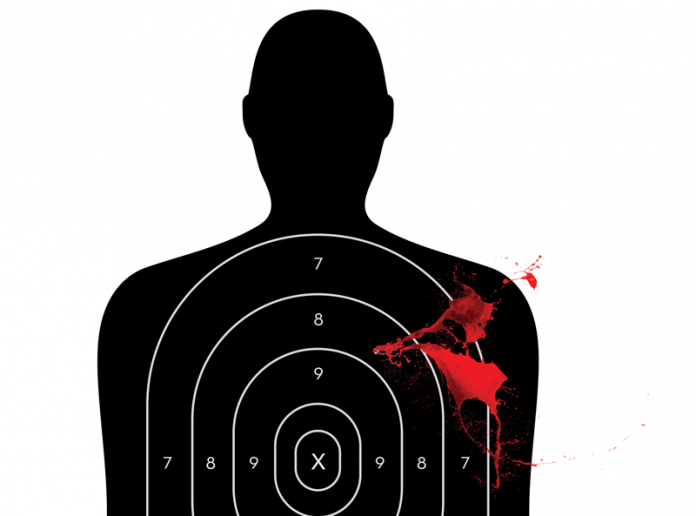 Horror movies overemphasize everything, including blood spraying from someone who has just been cut by a deranged, masked killer. Independent and low-budget film productions don’t have access to all of the technologies used in high-end productions. For example, super high-resolution cameras, but creating practical effects are the same for every production: devices that perform a task on-camera must be first assembled and then used live.

One of the most frightening of all the practical effects is where blood sprays out from a person — caused by someone being stabbed with a knife or shot, cut by a sword or impacted by a sharp object. Regardless of what is causing the punctured skin, the result is that blood sprays out of the wound/impacted area — sometimes as a dribble and sometimes more as a river. This is accomplished by making a blood squirt device.

There are three parts to making a blood-squirt device. The first part is the “blood”; the second part is the device that the blood resides in until it’s showtime; and the third part is the mechanism that propels the blood. Simplicity requires that when the mechanism is activated, the person who the blood is going to spray from can control it him/herself as well as from off-camera. Additionally, the mechanism should be such that it can be used repeatedly and does not have any contents which can fail (such as an explosive charge that fails to detonate), ruining the shooting. A blood-squirt device that relies on air pressure to propel the blood fulfills these needs and also makes for an inexpensive device.

The blood-squirt device, at its core, is similar to that of the classic “smell the flower on my lapel and get a spray of water” gag that was a mainstay of the 1920’s jokester. All that is needed is tubing, which can be surgical or plastic tubing acquired from a surgical supply house. The main necessity is for it to be flexible, although it also needs to be thin in most cases (except as where a huge amount of blood is to be dispensed). The length will be based on both — where it’s to be positioned on the actor’s body, along with where the trigger will be. For example, if the actor is to initiate the blood, it needs to be long enough to reach his/her waist and a little past that. If the trigger is to be done by someone off camera instead of the actor, the length might be slightly longer.

Creating practical effects is the same for every production: devices that perform a task on-camera must be first assembled and then used live.

The device that will hold the blood and provide the air pressure to push it through the tubing is a commonplace syringe. The size of the syringe again is dictated by how much blood will be dispensed, along with the physical size of its tip and the tubing, as these two must be mated together. As there are different sizes of syringes, it is necessary to view the choices in order to select the one most suitable. The tubing can also be larger than just one that fits over the tip of the syringe. For example, applying momentary heat to the tip of the tubing can cement it in position over the end of the syringe. Alternately, a drop of superglue will accomplish this as well.

The final step is to make the blood. This must not be so viscous as to impede its flowing freely, for example running more like molasses than free-flowing water. The ingredients should be intense in color — enough to be easily identified — since the blood is to be seen as it exits and sprays into the air as well as drenching the immediate area surrounding the “wound.” There are a number of recipes for making blood, each having their advantages/disadvantages which relate to the shooting. For example, chocolate syrup makes for a very bloody look, but only if filmed in black and white.

At its core, there are a few ingredients that are generally used, such as red food coloring, corn syrup or corn starch. But the look of all these recipes vary, so it becomes a personal preference as to which is the best for the particular production in which blood is needed. Almost all of the recipes suggest pouring out a few drops onto a white card or paper towel to see how the color looks — keeping in mind the abruptness of the spray might require the blood to be less so it’s more noticeable when it appears.

Doing a test shooting with the same lighting that will be used will aid in seeing how the blood looks both in-camera as well as when viewed in post-production. But some things are universal — such as the fact that whoever will be making the blood will end up getting it all over their hands and clothes. Hands can be washed (or latex gloves worn), but even though the ingredients are all biodegradable, it won’t hurt to wear an old T-shirt when mixing the blood —  working in a sink or on a surface covered with paper towels.

The blood-squirt device that follows is notable for both its simplicity of creation, low price and ease of use. Supplies can be acquired from a surgical supply store, a drugstore and grocery store. The following how-to has the blood coming out from the upper body, but the tubing could be concealed in a hand for a finger being chopped off, etc.

1) Make a small hole in the bottom and front of a shirt pocket (or at whatever area on the front of the shirt where the blood will exit) that will be worn by the actor.

2) Have the actor put on the shirt, but leave it unbuttoned.

5) Depending on the shot being filmed, either the actor or another person can hold onto the syringe and depress the plunger of the blood-squirt device either slow or fast when the time comes.

Follow these instructions and you should have a fully-functional blood-squirt device to help sell any gory action or horror scene.

A useful method for propelling the blood is to make a squib — this blood-squirt device is basically a small, plastic bag filled with blood-like liquid which is detonated by an explosive charge set off by an electrical signal (obviously the charge is non-lethal). The squib’s main purpose is to shoot the blood out with great force, the result being a splattering effect having been derived as if from a gunshot wound or some other object causing a massive trauma to the body.

As can be imagined, making such an explosive-powered squib should only be done by a professional. This is why alternatives have cropped up, such as the use of a CO2 cartridge to trigger the blood flow, or building up air pressure inside a balloon or similar object that, when the air is released, forces out the blood without relying on either explosives or a detonation trigger.

Marshal M. Rosenthal is a technology and consumer electronics freelance writer based on the West Coast.