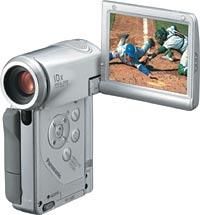 nNovia’s QuickCapture A2D captures DV streams as Type-2 AVI files that can be edited directly on a computer. It can also function as a capture device for analog video, as well as play back any captured video through its analog video output. Built-in rough-cut logging simplifies tape logging, allowing important takes to be marked while shooting.

SmartSound has announced five new CDs in its Movie Music library, including a second Blockbuster disc, a second Vacation disc and new Christmas, Comedy and Memories discs. Each disc includes 10-12 tracks of music and works with SmartSound’s Movie Maestro software to easily customize the music to any length.

Xtreme Notebooks’ Prostar 8814 is among the first notebook computers to include an Intel P4 processor with a 800MHz front side bus. It also includes a 16-inch TFT LCD display with an ATI Mobility Radeon 9600 PRO graphics. The machine also includes built-in FireWire and is available with a Hitachi 7,200 rpm notebook hard drive.

Pioneer’s first DVD burner that burns both DVD-R/RW and DVD+R/RW discs, the DVR-A06, burns DVD-R/+R discs at 4x, DVD-RW discs at 2x and DVD+RW at 2.4x, as well as CD-R at 16x and CD-RW at 10x. The unit includes a 2MB buffer, and includes buffer underrun protection.


More Time for Other Things

Sony’s DCR-PC330 Mini DV camcorder is the first 3.0 megapixel camcorder. Its optical system includes a 10x optical zoom, a ring-controlled manual focus and utilizes a unique primary color filter, which improves the quality of captured video and still images. The camera features a 2.5-inch Touch Panel LCD viewscreen. The PC330 weighs just over one pound with its battery installed.

Azden’s 100LT on-camera UHF wireless microphone system consists of the 100UPR true-diversity receiver and the 100BT body-pack transmitter. The system can utilize any of 63 channels between 794 and 806MHz. The transmitter works with any microphone with a 3.5mm jack. The transmitter and the receiver both measure 3 7/8 (H) x 2 3/8 (W) x 13/16 (D) and each can last as long as eight hours on a single 9V battery.

MAGIX Movie Edit Pro 2004 includes batch capture and scene detection as well as real-time video effects and transitions. The program also offers compositing and motion stabilizing capabilities. It can output to DV AVI, Windows Media 9, MPEG-1 and MPEG-2 natively, with MPEG-4 and DivX possible when the appropriate codecs are installed.


Code with the Pros

Canopus has released the latest version of ProCoder, which adds Flash and DivX output, as well as the ability to schedule transcoding jobs for times when the system is idle and a feature that watches folders for new files to be processed. Procoder continues to support an impressive slate of existing formats as well.