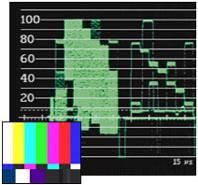 We often hear the phrase "broadcast quality" when talking about video signals and equipment. Many readers have asked us to explain exactly what is broadcast quality. All video in the U.S. adheres to the NTSC.

Three different signals make up the composite video signal: the sync (horizontal and vertical synchronization), luminance (brightness) and chrominance (color). There is a range on the scope where you can call these signals "broadcast quality." The unit of measure for the waveform monitor scale is IREs (for the Institute of Radio Engineers who set the measurement system).

To measure a signal to check for broadcast quality, set the waveform’s baseline at 0IRE. The top of the video waveform is 100IRE on the monitor, and appears as white in the video image. No part of the signal should exceed 100IRE. The black portion of a video image is 7.5IRE. A little above 7.5IRE and the image appears as a dark gray. A little below 7.5IRE and the black portion will have no image detail. No part of the picture’s luminance signal should extend below 0IRE. However, the synchronization portion of the video signal should be below the 0IRE baseline, so the video equipment can differentiate the sync signal from the picture information. The tip of the synchronization pulse (sync tip) should be set at -40IRE, otherwise the signal can become unstable and/or washed out. "Color burst" controls color, and appears in the sync area of the signal. It should cover a range from +20IRE to -20IRE on the scope.

There are many other things to see on a waveform monitor, but these are the most important points to check to see if your signal meets the basic standards for NTSC video. If your video signal meets these criteria, you’re safe to say it’s a "broadcast quality" signal.