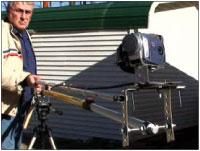 We recently received this letter and photos from a reader and thought we’d share them with you. Bob Plate was inspired to build a jib following one of the two DIY Jib & Crane tutorials in our November 2008 issue. He writes:

I was delighted to see the tutorials for the DIY Camera Jib and Crane in Videomaker magazine. I videotape all our Sunday morning church services and burn them onto a DVD for shut-ins or those that may have missed a service. The tutorial’s concept and inexpensive idea was a catalyst and foundation for expanding and adapting it to a very useful jib for me. So thank you. I would have never gotten this far without your ideas. The jib was built as to your tutorial specifications, but I had trouble with the trapeze and my battery was unreachable once the camera was attached to the jib. So I modified the jib with these adaptations:

First off, I removed the large tilt locking bolt and replaced it with a hex head nut to lock the tilt tightly with a wrench.

Instead of using a film canister, I split the rubber handle of the extension pole and used that. Also note that I bolted the tripod head attachment to the support bracket using the original bolt.

Notice I also screwed a wooden handle to the control lever, and I had to bend the metal strap to get by the tripod tilt bolt. You will also note that the control lever extends five holes up for the control arm to match the front trapeze bracket.

Here I bolted the camera control arm to the support bracket, and the split-ring pipe hanger I bought at a hardware store. I put nylon lock-nuts on both the inside and outside of the support bracket, so I could regulate the tension on the control arm. By that I mean that, if I wanted to lock the camera angle to have it stay, let’s say in a downward angle, it would stay at that angle even while I raised or lowered the jib arm.

Below you see the camera fixed to a downward and also the upward position by the control lever. The reason for the nylon locking nut on both inside and outside of the support bracket is so you can apply the needed tension for the weight of your camera.

I have attached a short video of the jib as it’s being used and then the outcome of the jib during the offering. Thanks for your magazine. I have subscribed since October of 2005, and it has been a valuable resource over the years.
– Bob Plate