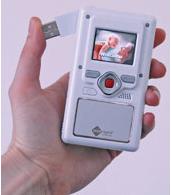 The Next Expendable Camcorder

Pure Digital, the creator of the first one-use camcorder (see Zoom In, August 2005 Videomaker,) has released what they dub the "Point & Shoot Video Camcorder." It includes a 2X digital zoom and a 1.5" LCD display, and shoots 30 minutes of MPEG-4 video onto 512MB of internal memory. A pop-out USB connection allows you to transfer footage to your computer running Windows or Mac OS, and you can also play back the video clips on a TV or on the device itself. It runs on two AA batteries. If you don’t own a DVD burner, you can take the camcorder to a selected retailer to have a DVD made from your footage.

RCA is also marketing a version of the camcorder, the Small Wonder EZ101, which is primarily different in that it is a charcoal color instead of the white used by Pure Digital.

Both camcorders retail for $129.

Shortly after Ampex developed the first VCR, IBM developed the first hard drive. The first hard drive was called the Random Access Method of Accounting and Control, and shipped with the IBM System 305 on September 13, 1956. It stored five megabytes of data on a set of 50 24" platters. The RAMAC had a single read/write head, meaning it could take as long as a second to get to the proper platter. The drive weighed over a ton and was available on a lease basis for $35,000 per year.

The IBM 1301 (1961) was the first drive that had a separate head for each surface onto which data is recorded.

The next drive milestone was the IBM 3340, released in June 1973. Known as a Winchester drive (for having 30MB of fixed storage and 30MB of removable storage 30-30–get it?), the 3340 slashed the time to access a particular piece of data to 25 milliseconds, making it a much faster drive than its predecessors.

The first hard drive that was smaller than a major appliance was Seagate’s ST506. The 5MB drive shipped in 1980.

It took a few more years for hard drives capable of handling video to show up, but now we are happy to report that pretty much any new hard drive you can buy today is capable of handling at least DV25 video. Prices were high (and drive capacities were small) at first, but it’s now possible to get a 250GB hard drive for less than a C-note. This is one of the remarkable achievements in the field of computer science that have been instrumental in bringing video editing to the masses.