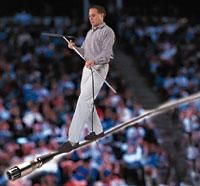 Loren Alldrin’s Sound Track column,
"The Balancing Act" (February 1998) was excellent. I want to add
to it one caution to videographers. Most consumer camcorders do not accept
balanced input signals. I have seen videographers run a long balanced cable
from a piece of pro audio gear, then just before it enters the camcorder
they use an adapter to convert it to the right size.

These videographers do not realize they have just lost all benefit to using
the XLR-balanced system. The moment they simply adapt the plug end they
break the balance and the entire length of the cable becomes unbalanced.
Alldrin correctly suggests using a transformer. If you use a transformer,
the signal stays balanced and the only unbalanced portion is the short cable
run from the transformer to the camcorder jack. Bringing the balanced plug
into a quality mixer before going into the camcorder can also correctly
transform the signal. This requires a mixer with balanced inputs and an
appropriate output to send signals to your camcorder. A mixer has the benefit
of allowing you to use several balanced signals, such as when you multi-mike
a wedding from different locations.

We’re in the Niche

I want to take just a minute to pay you a well-deserved compliment.
In particular, I want to thank you for not losing your niche.

I subscribe to two other video magazines besides yours and Videomaker
is my hands-down favorite. Your competitors have drifted into the home theater
thing, the movie review stuff, and a major emphasis on the computer field.
Now, don’t get me wrong; the computer segment is fine, but not when it dominates
the basic objectives of the publication.

Your product reviews and other departments are all in good balance, so I
hope you can keep it that way and not drift off. Just keep up the good work
and stay in your niche.

The View From the Other Side

Lauryn Axelrod’s Getting Started column "Artistic Vision"
tells only half the story. Granted, she gives ideas on how to move the camera,
but never explains why. To tilt or pan just to give your video an "artsy
look" is like speaking just to make conversation. Tilts, pans, dollies
and other camera moves should be used as a visual tool to capture or retain
the viewer’s interest.

There are so many options open to today’s videographers, what with all the
different special effects generators and such on the market. While most
of what Ms. Axelrod teaches are useful technological tricks, artistic vision
is just what the phrase implies. It is a product of creativity, not a by-product
of technology. True artistry comes from within. Not out of a box.

Every week, the local cable access channel shows a locally produced
"reality" program. The show aspires to be a COPS-style
program, but fails miserably. The technical shortcomings don’t really bother
me so much as what appear to be blatant violations of laws protecting personal
privacy. I often see suspects and witnesses giving their full names, addresses,
social security numbers, even phone numbers, and the producer doesn’t even
make an effort to edit them out. Occasionally, someone will ask the producer/videographer
on-camera why he’s recording him or her, and the camera operator says something
like, "We like to document these things," making no mention that
it will later be shown to the public. There are also people who hold their
hands in front of their faces verbally protesting being on camera. Somehow
I doubt any of these people signed a release.

The producer also has little regard for copyright laws. He uses footage
from the actual COPS program in his promotional spots designed to
attract sponsors, and pretends it’s his own footage. And for the sponsors
he attracts, he makes bad commercials using copyrighted music throughout.

Am I wrong, or is this guy breaking laws left and right?

It is not necessary to obtain releases from the parties involved in a so-called
newsworthy event. We can’t tell if the videographer has permission to use
the copyrighted music; however, it is not difficult to obtain though often
costly. If he has violated anyone’s privacy or copyright, it is the victim’s
prerogative to bring legal action against the producer and the cable system
operator.