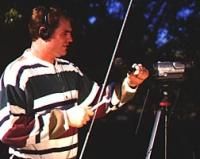 From the delicate ticking of a timebomb to its gut-wrenching explosion, sound effects are a sure-fire way to grab and hold a viewer’s attention. Hollywood movie moguls wouldn’t invest millions of dollars in a soundtrack if sound effects weren’t vital to the movie’s impact.

If you can’t take my word for it, try this experiment: rent a big-budget action thriller (Terminator, Aliens, Air Force One) and find a particularly engrossing section. Turn off the sound, and watch the scenes in silence. Then, crank up your highest-fidelity stereo system or headphones, close your eyes and “watch” the same scenes again. Comparing the visual effects and the sound effects, which was most captivating on its own? In many cases, the sound effects are even more powerful than the visual effects they accompany.

You can give your videos the same auditory impact as a Hollywood movie without the mega-bucks budget. In fact, you can use the same techniques that feature film producers still employ today. All you need is creativity, a willingness to get your hands dirty, and some common household items.

Sound effects can do more than just rock viewers in their seats or set their hair on end. In fact, sound effects can achieve some subtle things you may have never thought of.

Sound effects can enhance realism. The low rumble of warp engines will help your viewers believe they’re on a spaceship traveling nine times the speed of light.

The roar of a stadium crowd will make a Superbowl experience out of six actors and an empty bleacher.

Sound effects can reinforce a mood or a feeling. The sounds of dripping water and the occasional bat screech really drive home the isolation of three spelunkers lost in a cave. The gentle buzz of insects on a lazy spring day, the crackle of a campfire under a starry sky–these sounds connect with a viewer’s emotions like no visual can.

And, best of all, sound effects can work this same magic in your videos. You don’t need a huge budget, fancy equipment or a recording studio to enhance your videos with engaging sound. You just need a little imagination.

There are several ways to acquire sound effects for your videos. One of the easiest is to download sound files from Videomaker‘s website (www.videomaker.com/downloads/free-sound-effects/). Another option is to buy professionally recorded sound effects on CD or CD-ROM, but that’s the easy way out. Much better for the home videographer is the do-it-yourself method. Home-brewed sound effects don’t cost anything, and they’re much more fun and rewarding than just plucking a sound effects CD off the shelf.

You can make convincing sound effects with common materials and items you have around the house–even top Hollywood sound designers use everyday items to create stunning effects. In a worst-case scenario, a sound effect may require a trip to a local hardware or grocery store. The key is learning to see common goodies not for what they are, but what they sound like.

Here’s a list of sound effects to jump-start your imagination:

Before you set out to make your own effects, come up with a list of all the sounds your video needs. Round up the materials you think may give you the sounds you want, and find a relatively quiet place to record. A checklist can be handy for keeping track of which effects you’ve recorded, and which ones you still need to capture.

You have several methods at your disposal for recording the sound effects. The easiest and most obvious is to use your camcorder, a technique that has several advantages. First, the camcorder offers the simplicity of a recorder and microphone all in one unit. Second, because it shoots video as well, you get a visual record of each effect. When scanning a tape for an audio effect, this gives you visual cues of their whereabouts. If you want to get really elaborate, you can even make up small slate cards that list the sound effect, the name of the video and the date.

Finally, recording sound effects with your camcorder gives you sounds in a format you’re already equipped to handle: videotape. For folks with an editing system, this sets you up for easy, accurate synchronization of sound effects and video.

Attaching an external mike to your camcorder is an even better way to record sound effects. You end up with audio on videotape, but you eliminate the chance of transport noise ending up on tape. Most external mikes offer fidelity that exceeds that of the camcorder’s built-in mike to boot.

A third method is to use a VCR (preferably a hi-fi stereo model) to record your audio tracks. Hi-fi VCRs offer fidelity that rivals that of compact disc, and many have record levels you can set manually. Connect a microphone to the VCR’s mike input jack or plug a mixer or your camcorder’s audio output to the audio input jacks. This will allow you to record clean audio onto a video format. If you want to have a visual record of the effects, plug your camcorder’s video output into the VCR. Set up a wide shot to take in all the action.

Finally, you can use a traditional audio recorder. A standard audiocassette deck will work OK, but its fidelity is not stellar. Better by far is a MiniDisc or DAT recorder–these digital recorders will give you crisp, noise-free recordings. With an audio recorder, you can plug a mike in directly, or run the mike through an audio mixer first. The latter method gives you a little more control over the sound as you record.

Regardless of what recording method you use, remember to monitor everything with headphones to be sure you’re getting clean audio on tape.

With all your sound effects captured on audio or video tape, it’s time to integrate them with your video. How you accomplish this depends on what sort of equipment you have, as well as the type of video you’re making.

Videographers with accurate editing systems will be better able to match sound effects precisely with some on-screen action. Those without editing gear are safer sticking with sound effects that aren’t synchronized to visuals. For the full scoop on inserting sound effects, see “Edit Your Audio, Too” in the September, 1997 issue.

Regardless of how you create them, record them or edit them, sound effects will breathe new life into your videos.

The Next Step: Electronic Effects

If you want to take your sound effects even further, check out any of the audio processors available for a few hundred dollars. Called digital effects processors, these devices are designed primarily for music recording. What they can do to normal sounds, though, is nothing short of amazing.

By adding a touch of reverb or artificial ambience, you can take a sound and place it any type of enclosed space. Plunk a penny in a can of water, add some reverb, and you’ll have the world’s deepest wishing well. A similar effect is delay, which adds a distinct echo to a sound.

Effects that change the pitch of a sound slightly include chorus and delay. The former makes a sound seem large and angelic, the latter can add a spacey, swirling effect.

Finally, many of today’s effects processors will do pitch shifting. This raises or lowers the pitch of a sound subtly or dramatically. Take the sound of a toy motor down an octave, for example, and you’ll get an ominous, rumbling machine noise. Virtually any sound commands more respect when shifted down; sounds shifted up often sound small and comical.

Many effects processors will perform eight or more effects at once, allowing you to alter a sound until it’s almost unrecognizable.