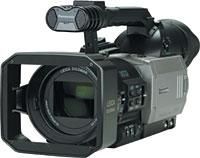 No camera in recent memory has generated as much buzz as the Panasonic AG-DVX100. This is the first consumer-priced camera to offer 24 frame per second progressively scanned video (24p), which (theoretically) makes video look like it was shot on film. Professional videographers and serious hobbyist can now capture video in 24p, which is how an increasing number of movies, television commercials and primetime programs are shot. There’s more to this camera than just 24p, however.

The large soft eyepiece on one end and a Leica Dicomar lens on the other create a very nice first impression. The handle running from front to back makes the DVX-100 easy to hold and control with one hand. A flip-out 3.5" LCD panel is located on the left side, just above two large dials for manually controlling the audio levels. On the right side of the camera you’ll find analog video inputs and outputs, a FireWire port and two large XLR connectors for microphones. The back of the camera contains a small dial for quickly changing shooting modes, from standard NTSC interlaced video to film-like 24p. There are six individual modes and two user modes that can be fully customized, which we found to be invaluable. This is definitely a sleeper feature on this camera that may be overlooked amid the all the 24p hoopla. There is a significant but small pause while the camera switches into the progressive modes (24p, 24p advanced and 30p). Strangely, auto focus does not function in any of the progressive modes.

You can control the zoom using the fingertip rocker or via the handle, but we liked the responsive manual lens-barrel zoom the best (with stops and barrel markings). The DVX100 also has a manual focus ring located on the lens barrel, but, unlike the zoom, it isn’t a true mechanical ring. We found the numerical representation of the focal distance in the viewfinder and LCD to be extremely useful. Optical image stabilization worked precisely and gave handheld shots an even and steady look. A tiny joystick above the LCD screen controls the camera in VTR mode. Pushing the joystick forward and backward fast-forwards and rewinds the tape and was easily operated in the field with one hand. Panasonic definitely gets two thumbs up for the appealing design of this camera. The professional, serious and clean look of the DVX100 will turn more than a few heads.

Panasonic left no stone unturned when it comes to the audio system on the DVX100, which has two XLR inputs on the body. The camera captures rich, vibrant audio that is easily monitored using the audio levels that are displayed in the flip out LCD screen or in the viewfinder. The large dials for manipulating the two channels of audio input were easy to find and adjust without having to remove your eye from the viewfinder.

The 24p features of this camera sparked considerable debate around the office. The video from the DVX100 was beautiful, no matter what mode we shot in. Shooting in 24p produced gorgeous results that did indeed have a film-like look and feel. Although it’s difficult to describe, the images produced a surreal and distant feel that was somehow different from video. For example, we shot a street corner right outside our office and played it back, and only a few people actually recognized it as the corner that they pass on a daily basis. Flesh tones appeared more natural than standard video. Rapid camera movement also produced a dizzying effect that is not usually associated with standard video.

A small but vocal faction in our office validly pointed out that you are throwing away 20% of your potential video frames when shooting 24p. Besides, the camera does shoot beautiful 30p video. Or you can shoot standard video at 60i (60 interlaced fields), which can be converted to 24p in post, for example, using in-sync Blade 2. (Caution: It is more difficult to convert 30p video to 24fps film than to convert standard interlaced 60i video to film. This topic is well beyond the scope of this review.) Further, it was argued that the vast majority of the video shot by most videographers with this camera is going to be played back on standard interlaced NTSC television, which means your gorgeous 24p is going to be telecined to interlaced 30fps anyhow (60i). Unless you are an indie producer prepared to spend thousands of dollars (perhaps $300 a minute or more) to transfer your video to film, you might want to rethink 24p.

The 24p supporters and the 24p skeptics came together for a pint at the pub later and agreed: this camera shoots beautiful images. You can shoot in 24p or 30p or 60i or whatever you’d like, so this is the one camera that can please everyone. The image can be endlessly tweaked with a host of camera controls and groups of custom settings can be saved to two user modes, instantly accessible with the mode dial. This meant that we could sharpen up the video and saturate the colors to win objective quality and resolution tests or soften the image up and desaturated the color to create an aesthetically warm film look. Suffice it to say, while everyone had a "best" way to configure the camera, no one was disappointed.

For whatever reason, objective or not, the movie-going public aesthetically prefers film to video. And while we might disagree about whether the typical videographer should even worry about the film look or should instead concentrate on shooting good video (you have to walk before you can run), the most powerful reason to recommend the Panasonic AG-DVX100 isn’t 24p itself, but the option to shoot 24p. Add to this XLR audio, the Leica Dicomar lens, three 1/3-inch CCDs, multiple user presets, endless image tweaking and a street price in the $3,500 range and you’ll understand why we feel Panasonic has made a revolutionary camera worthy of our highest praise.

A revolutionary professional camera that allows shooters to switch between cinema-like images or standard video modes.