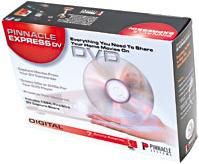 The first wave of introductory-level DVD authoring software has broken with a plethora of products from many top manufacturers, from Apple to Ulead. In the sub-$100 range, wizards and templates are the rule and ease of use is the key feature. Pinnacle’s entry in this category is called "Express," and despite a few first-generation glitches, the program promises to eventually approach the top of its category.

From Cam to Disc

Instead of focusing solely on DVD authoring, Pinnacle also took advantage of its existing editing software and includes tools for capturing and simple editing. These reused features are well implemented and seamlessly integrated into the total package. The capture tool’s scene detection was very accurate, and used either optical or time/date stamp information to split files, depending on the user’s choice. Scene detection occasionally ran automatically when importing pre-existing video clips into the application, but we were unable to figure out what caused this. A seven-minute DV video file took a little over one minute for the scene detection utility to analyze.

Pinnacle Express did not recognize some DV .avi files previously captured using other applications (from Adobe, Sonic Foundry and Ulead). We suspect that this was a codec issue, since Pinnacle Express installed its own DV500 (Studio DV) DV codec. We also noticed a correlation between type-1 DV .avi files and failure, although we can’t verify exactly what was causing the problems, since there were almost certainly complex interactions between Windows DirectX drivers and the Pinnacle software. The bottom line is that there are compatibility problems with this version of Pinnacle Express and video files created or captured with other applications. When we used Pinnacle Express to capture new source DV footage, we experienced no problems.

Editing was limited to trimming and recombining clips, but was sufficient for most final-stage DVD authoring decisions. In addition to video, Pinnacle Express can also automatically create a slideshow based on a collection of still images.

The heart of this package is the DVD authoring, which, like other products in this class, relies on predefined templates for menus and disc navigation. The software included many attractive templates and allowed some customization, including the selection of different preset menu layouts (16), thumbnail frame styles (23), custom background images and music based on your own pictures and sound files. One weakness is that there are only seven fonts available for titles; most applications we’ve seen so far allow you to use any TrueType font on your computer. You can save customized templates for future use, but a minor bug in our review version did not allow us to delete them. Since our review, Pinnacle has solved this issue, but you may have to go to the Pinnacle Web site at www.pinnaclesys.com to get the update.

Pinnacle DVD-authoring products use a Pinnacle MPEG encoder to create valid video streams for DVD. The codec created very high-quality files that were indistinguishable from other consumer-level MPEG encoders we have used (e.g. Ligos), displaying minor blockiness on very dark scenes and showing only limited artifacts on complex moving tree leaves. Encoding on a 900MHz AMD Athlon took about four hours and 15 minutes for an hour-long project.

Testing the simulated DVD on the hard disk before burning was adequate, but it occurred before a disc image was created, so that was of limited value. We tested on a Windows Me machine with a Pioneer DVR-A03 DVD-R drive. The actual burning of the disc itself seemed uneventful and took about as long as the duration of the content. When it finished, the software ejected the disc from the drive and signaled that the process was complete. We visually examined the disc and could not detect where the data had been written. When we used Explorer to look at the disc, we only saw a single 1KB audio track. Of course, the DVD did nothing when placed in stand-alone DVD players. Some authoring applications we have tested on this machine have worked well and others have exhibited similar problems. The combination of newer hardware, a young operating system and first-generation authoring software should serve as a cautionary tale, but it is impossible to place the blame for failure on any particular doorstep.

Overall, Pinnacle Express looks nice and has a good workflow. We don’t usually like the cute user interfaces found in novice-level products like this, but workspace is not really an issue here since this is not an editing application and the layout is nice and open. The program was extremely stable on our Windows 98SE platform, but we saw occasional crashes on a Windows Me box.


There were a number of strange little bugs that popped up here and there, like the previously mentioned non-functional delete button and quirky importing of existing DV footage. We also encountered an error message pop-up with no text on it, just a "Yes" and a "No" button and a scary yellow exclamation mark. Which one would you have pressed?


Worst of all was an uninstall utility that left behind three folders with nothing in them. None of these bugs were critical or should dissuade you from buying this fine application, but they are strongly indicative of a first-generation program that has yet to iron out all of its kinks. Updates are already available online at the company’s Web site and we highly recommend them. Hopefully, Pinnacle will fix these bugs as well as the major file-type compatibility issue.