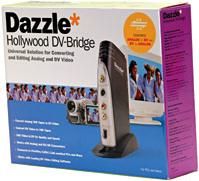 Folks who would benefit from a device for converting video from analog to digital are just the sort of people Dazzle had in mind for its Hollywood DV-Bridge. If you have a FireWire-equipped computer, but don’t own a DV camcorder, or if you have an older DV camcorder that does not include analog inputs, you may need a digital-to-analog converter.


The Hollywood DV-Bridge is a stand-alone analog-to-digital or digital-to-analog converter with the added ability to control your source deck or camcorder equipped with LANC so you can perform batch captures of your analog footage.


It can perform video conversions both ways without connecting to a computer at all, which is a very useful function if you own a DV camera that does not have analog in. Simply hook up your analog source to the front (input) side, and your digital destination deck to the back (output) side, of the Hollywood DV-Bridge. Use the mode-selector button to choose the appropriate function.

The Many Faces of DV-Bridge


Even if you own a DV camcorder that has analog inputs, you may still want to obtain the Hollywood DV-Bridge so you have can a permanent installation. Regarding permanent installations, have you noticed how most FireWire ports are on the backs of computers nowadays? The Hollywood DV-Bridge can act as a much more convenient connection station, or a generic breakout box. Since it has passthrough FireWire and analog connectors, you can keep it ready to hook up to your source deck or camcorder at any time.

When you open the Hollywood DV-Bridge box, you’ll find a base, a six-foot-long, six-pin FireWire cable, an AC adapter, a thin manual, the DV-Bridge itself and a CD containing drivers, the latest read-me file and editing software.

We followed the QuickStart instruction sheet during installation, and we were up and running in no time. We installed the DV-Bridge on a Celeron 400MHz with 512MB RAM, a 30GB hard drive, an SiS 32MB AGP video card, and a generic PCI IEEE 1394 card. After installing the drivers, we installed the editing software bundled with the Bridge (Dazzle’s own MainActor, plus MGI’s VideoWave 4). They went into our system without any problems.

Capturing Analog with a FireWire Port

The first thing we tested was the Hollywood DV-Bridge’s forte – digitizing analog video. We hooked up a Sony CCD-TRV25 8mm camcorder to the composite input, and captured into MGI VideoWave 4. We captured several clips of varying lengths with no problem. We were also able to capture our 8mm footage into Adobe Premiere 6.0.


Next, we set up a batch capture in Premiere. We chose eight clips of varying lengths from a variety of locations on the tape. The Hollywood DV-Bridge controlled our camera very well using the LANC, finding all the clips and capturing them for us.

We tried out each of the Bridge’s features, and found that they all performed as advertised. Converting digital video to analog for output also went well.


We used the Bridge to connect a television as a monitor during digital capture from a DV camcorder, and it was an enormous help to see the footage on a TV before capture. Overall, we liked the way the Hollywood DV-Bridge performed, and its multi-purpose feature set was nice, too.