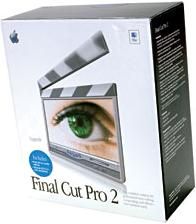 
Apple has always been firmly entrenched in the digital image revolution. Its platform is the workstation of choice for the majority of graphic designers and video editors. Most of the stalwart software applications for multimedia presentation were erected under the Macintosh OS before becoming available the PC. Now, Apple offers more and more applications under its own banner and one of the most mature incarnations is the latest version of Final Cut Pro, version 2.0. It’s targeted for the Mac-happy video storyteller, from amateur to pro, who requires reliable video editing with nothing more than an off-the-shelf G series Power PC. For Final Cut Pro 2.0 use, the G4 is highly recommended as are hardware enhancements like video accelerator cards and high performance storage drives.

When Final Cut Pro 2.0 arrived, the prolific manual that replaced the modest sub-200 pager that accompanied the earlier version of FCP humbled us. This nearly 2,000-page testament to the software’s operations additionally provided information on many other general video topics that Apple felt compelled to include. Although the book was of an unwieldy size, we admit that we found answers to all the questions that we could think of to challenge the literature.

G4 Under the Hood

We tested Apple’s new version with the help of a popular video capture/digitizer board installed in our G4 450MHz. The G4 also held 512MB of RAM and an ATA/66 RAID controller card that addressed two 60GB ATA/100 storage volumes. With the addition of the accelerator card and sufficient drive throughput, we had a contented editing suite to begin work.

Acquisition of DV footage in Final Cut Pro 2.0 via Apple FireWire is as strong as we’ve seen in any of its competitors. The Log and Capture window is easy to use and does a commendable job helping to manage your project files. Machine control from various cameras was smooth and accurate. We tested models from JVC, Sony and Sharp. The frame-by-frame shuttling through FireWire was unsurpassed in our experience.

Getting the initial setup of the project’s input and output settings was a little confusing, and admittedly compounded by our additional video card hardware. But working with third party products is just part of the test in our opinion.

We had difficulty getting proper overlay to external monitors and audio out with the recommended information, and Final Cut Pro 2.0 failed to respond to what we were triple-sure were the correct settings. Even after having tech support guide us in the task. What cracked the nut, so to speak, was to run the provided tutorial sequence playback. After playing the tutorial, the same settings we struggled with in vain became operational. Go figure.

Final Cut Pro 2.0’s editing interface offers endless choices for whatever editing style suits you. There are numbers of ways to clip, cut, trim and nudge footage and graphics, as well as choices for tweaking transitions, effects and filters. It is truly a great software engineering effort. The timeline is easy to manipulate with unlimited video and audio tracks per sequence and unlimited sequences per project. We have found these options lacking in some of the more competitive editing software solutions.

Final Cut Pro 2.0 is quite a compositing program as well. All effects and filters, audio and video alike, automate through keyframes. With the import of Photoshop layers, graphics and the comprehensive manipulation of the video signal in composite modes, Final Cut Pro 2.0 can accomplish many of the tasks that were once only available in alternate programs such as Adobe After Effects.

With a video card installed, we enjoyed more real-time functionality than a CPU-only user would get. But even with the card, when we adjusted any video or audio frame within a clip on the timeline, or its associated layers, we had to re-render the entire section. This, by far, was the lowest point on our workflow meter. To get around this hurdle, we found ourselves using the razor tool to snip clips to isolate them from the render hogs, but this practice can make a mess of your timeline. We would welcome intelligent rendering, where only the area of interest was re-rendered in future upgrades of this fine program.

We also found the audio editing a bit clumsy. Nodes for level adjustment are added as keyframes in the clip-edit window, not directly on the timeline. Another downside was the audio dynamic filters and lack of graphic EQ slopes in the interface.

Also, you cannot adjust audio filters while the audio plays back, which made mixing a bit too hit-and-miss and not very creative. The admirable addition of Bias Peak (an audio software-editing program) to the bundle attests to Apple’s own misgivings toward audio attention.

Final Cut Pro 2.0 will become an even more dominant force in affordable digital editing. Our hope is that Apple will someday soon put together complete turnkey systems outfitted with hardware customized for Final Cut Pro 2.0, that is in the fullest sense of the word, integrated. But until then, Final Cut Pro 2.0 is a good place to turn.

Mac OS 9.1 or later (9.1 Updater included Final Cut Pro 2 is not certified to run in Mac OS X or in Classic mode)

Direct manipulation of video and images